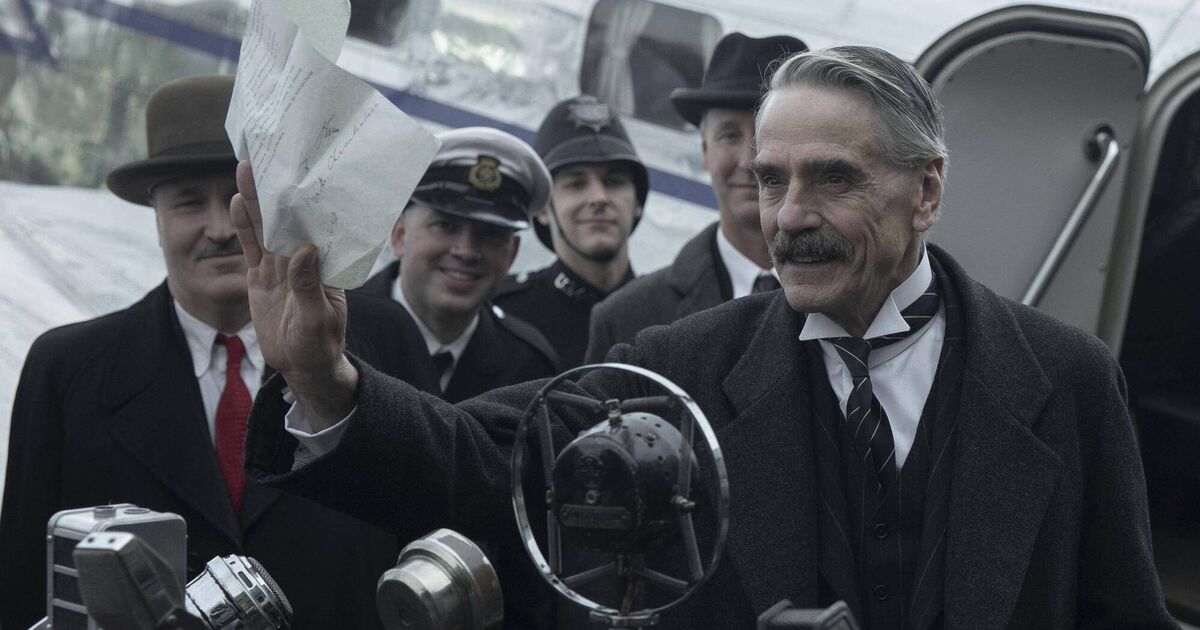 THANKS to a superb performance by our own Jeremy Irons, Munich – The Edge of War is an excellent and quite timely film.

Irons plays British Prime Minister Neville Chamberlain, who has gone down in history as a kind of naïve Tory toff who stumbled like a lamb into Adolf Hitler’s Munich lair and sided with the big, bad wolf.

In 1938, Chamberlain returned to Britain with a note full of Hitler’s soon-to-be-broken promises, declaring: ‘I believe it is peace for our time’, and ending his Downing Street speech with a touching appeal: ‘Go home and have a nice quiet one get sleep.”

Britain duly sleepwalked into World War II, but the film seeks to put a new spin on the reputation of Chamberlain, regularly cited as one of Britain’s worst Prime Ministers, while his successor in 1940, Winston Churchill, is cited as the best .

The film begs the question: how bad can a man be who longs so much for peace? A man who once said, “How awful, fantastic, incredible it is that because of a quarrel in a distant land between people we know nothing about, we are here digging trenches and trying on gas masks.”

Many Irish would relate to this remark.

Interestingly, Chamberlain had some experience with Ireland during his tenure. In 1938 he struck out a deal with Éamon de Valera to end the trade war that was hurting both countries.

Dev proved a tough negotiator, and at one point Chamberlain complained that he had given him “a three-leaf clover, neither leaf of which had any benefit to the UK”.

Eventually an agreement was reached and Dev had to retract his attempt to raise the issue of partition – after all he was a pragmatist, just like Michael Collins had been 16 years earlier!

This agreement was the one that returned the three treaty ports, including one at Spike Island, to Ireland.

Chamberlain was attacked in Britain for this when war with Germany seemed imminent, particularly by Churchill, and he claimed rather weakly that de Valera had verbally assured him that in the event of war the British would have access to the ports.

When World War II broke out a year later, Dev went back on his promise and denied Britain access to the treaty ports, citing Irish neutrality.

Ah, yes, Irish neutrality: that old chestnut, which has frequently raised its head since its inception in the 1930s, will return to the agenda both domestically and internationally in the days, weeks and months to come…

Just as Ireland was waking up from its long Covid hibernation and looking forward to a new spring, the Russian bear blinked into the limelight.

His troops have been standing together on the border with neighboring Ukraine for months, and the international community is becoming more and more anxious about a possible invasion.

Amid the distractions of a pandemic, it’s been easy for countries like Ireland to look the other way. After all, there are 3,000 km between Cork and Kiev, and our friends in America, Germany and Brussels have determined that, right?

Then we learned that Russian saber-rattling was venturing a little closer to home and that they were planning to hold naval military exercises just 150 miles off the south-west coast of Ireland in waters that come under our jurisdiction.

I must say I was surprised that this blatant act of aggression did not in itself violate the so-called international law of the sea, but there is little doubt that Vladimir Putin is what is known, at the undiplomatic core, as a shit-stir.

Our Secretary of State, Simon Coveney, acted swiftly and in more diplomatic language to declare Russia’s actions “unwelcome”, adding that the European Union would hold Russia accountable if it invaded Ukraine.

That was nice rhetoric from the Cork TD, but as he talked about EU sanctions and restrictions on Russia, I couldn’t help but wonder if Ireland was entering into another major debate on neutrality.

If Russia invades Ukraine, which seems likely – especially as the West is still grappling with the pandemic and two of its allies, Britain and the US, are led, to put it kindly, by dying figures – and if a military response is considered necessary, will Ireland sit on the fence again?

Although not in the EU, relations between Ukraine and the bloc have deepened in recent years. What if the EU demands a cooperative military response to this act of aggression on its doorstep? Will Ireland offer to provide troops against its neutrality? If not, what will that do to our reputation as the block’s model child?

How would an invasion affect Ireland’s recently won and cherished role on the United Nations Security Council? Would his neutrality be seen as an advantage?

The Council can authorize the use of force if it deems it necessary, but should a neutral country be allowed to vote on such an incriminating issue when none of its citizens risk being taken home in body bags?

All of these questions will come more into focus should Putin invade Ukraine.

Neutrality is regularly a hot topic in Ireland.

It was first tested during the Second World War when the Irish were providing intelligence to Britain and its allies, and many will know that weather reports from here supported the crucial timing of the D-Day landings.

For years we allowed US planes to land at Shannon Airport during the Middle East wars, but sending our troops to trouble spots like Ukraine would be a different game altogether.

Certainly any move by the government thought to run counter to our widely cherished neutrality would cause political tensions, not least because Sinn Féin has consistently opposed any move towards an EU army.

All of this could become moot if Putin backs down or if, as usual, the EU leaves any military action to the Americans or NATO.

But an international crisis always looms, and it is fair to assume that the formation of an EU army may only be a matter of time.

The issue of Irish neutrality will keep us busy until someone touches the nettle.