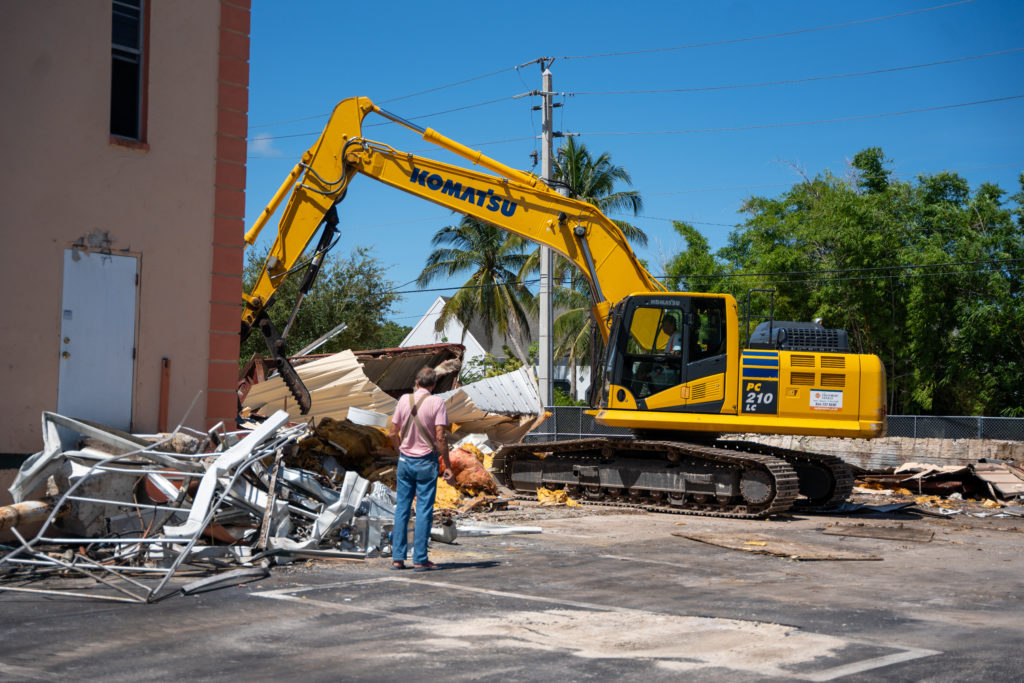 The 3,600-square-foot retail store and an adjoining 3,920-square-foot wholesale warehouse are being demolished for future redevelopmentsaid debra forester, director of the counties Bayshore Gateway Triangle Community Redevelopment Agency (CRA). “Our plan has been to demolish it and do a highest-and-best-use study, seek public input and then go from there,” Forester said.

Del’s 24 hours store operated for more than 55 years at 2802 Thomasson Driveselling bait, beer, food, lottery tickets and much more. Del’s Corner was dedicated by the county last November at that intersection of Thomasson Drive and Bayshore Drive to recognize Del Ackerman for his many years of community service and for operating his landmark store there around the clock since 1963. Ackerman died in August 2019 at the age of 83 and his long term store closed a year later. Last fall, the Bayshore CRA purchased the store and adjoining property totaling 1.84 acres for more than $2 million from Theresa Ackerman, Del’s widow.

While acknowledging that it was a tough decision to sell, Theresa Ackerman said she gave the county the first option to purchase it because she thought that a future project there could honor Del’s legacy. “When they actually build it, I did want to see it go to something that would benefit the neighborhood,” she said after the sale.

While the CRA does not have specific plans for the corner lot yet, the general thought is that its redevelopment would be complementary to the Bayshore Arts District and the Naples Botanical Garden across Bayshore Drive.

The county contracted with Capital Construction for the demolition of Del’s store, which has been subcontracted to Gulf Shore Site Development, said Camden Smith, project manager at the county’s Facilities Management Division of Public Utilities. The project temporarily want create a passive space by sodding the area where the former store and warehouse stood.

“the parking lot is not entirely being removed,” said Smithnoting that work is targeted for completion before the first day of school on Aug. 10.”I think we are right on track on that,” she said.

Construction in the Bayshore Gateway Triangle continues to transform the area and to establish a vision of the CRA for the future, County Commissioner Penny Taylor wrote in a letter that is part of the CRA’s annual report for 2021.”But as the new rises from the ground, we say goodbye to the icon of Bayshore – Del’s 24 hours Food Store,” Taylor said. “Founded by Del Ackerman over 50 years ago, this convenience store was the commercial anchor of the area and never closed due to inclement weather, such as hurricanes, threats of tornadoes, thunderstorms, etc.“

Del’s Corner what part of the Thomasson Drive enhancement project funded last year by the Bayshore Beautification Municipal Services Taxing District. The $6 million project consistsedit of a roundabout, 6-foot-wide sidewalks, improved drainage, bike lanes, decorative street lighting, signage and Florida-friendly landscaping along Thomasson Drive from Orchard Lane to Hamilton Avenue. Del Ackerman was instrumental in having the final design include on American flaywhich the community gathered last summer to inaugurate. They 8-by–12 foot flay flow on a 40 feet flagpole in the center of the roundabout.