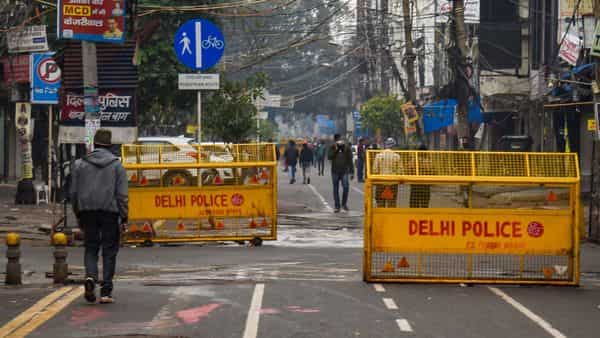 The Delhi Disaster Management Authority (DDMA) announced Monday that there will be no lockdown in the capital, despite considering more stringent COVID-related restrictions. However, given the huge spike in cases in the coming days, is the city staring at a lockdown?

According to DDMA’s tiered response, a red warning indicating a full curfew will be issued if the positivity rate exceeds 5%, or new cases rise to 16,000, or oxygen-rich bed occupancy reaches 3,000.

Stricter curbs, but no lockdown: DDMA

In today’s meeting, DDMA announced it would impose stricter restrictions, but there won’t be a lockdown. It has decided that dine-in service in restaurants will cease while take-away service is allowed.

In addition, it was decided to allow the operation of only one weekly market per day and zone. The seating capacity in subways and buses is also to be reduced.

It also decided to strictly enforce existing restrictions and also discussed the possibility of imposing similar restrictions in the National Capital Territory.

The decision was made during a DDMA meeting chaired by Lieutenant Governor Anil Baijal. The meeting was attended by Chief Minister Arvind Kejriwal, Deputy Manish Sisodia, Minister of Health Satyendar Jain, Minister of Finance Kailash Gehlot, Chief Secretary Vijay Dev and other officials from the Ministry of Health.

Kejriwal said on Sunday that the rapid spread of the coronavirus in Delhi had given rise to “deep concern”.

This is probably due to the fact that, despite increasing cases, bed occupancy in hospitals is currently low.

However, the CM also pointed out on Sunday that restrictions could increase from “yellow alert” to “red alert” if Covid positivity goes well above 20%.

Last week, Health Minister Satyendar Jain said, although the case positivity rate is high this time: “The bed occupancy in the hospital and the severity of the infections are very low this time.”

He told reporters on Thursday that Delhi was in a comfortable position with hospital bed occupancy.

Jain had further pointed out that the number of cases in Delhi was high as many people in the city were being tested for COVID-19.

At its last meeting, the DDMA decided to impose a weekend ban in Delhi. Authorities also ordered schools, colleges, cinemas and gyms to be closed, and shops and public transportation to be restricted.

(With contributions from agencies)