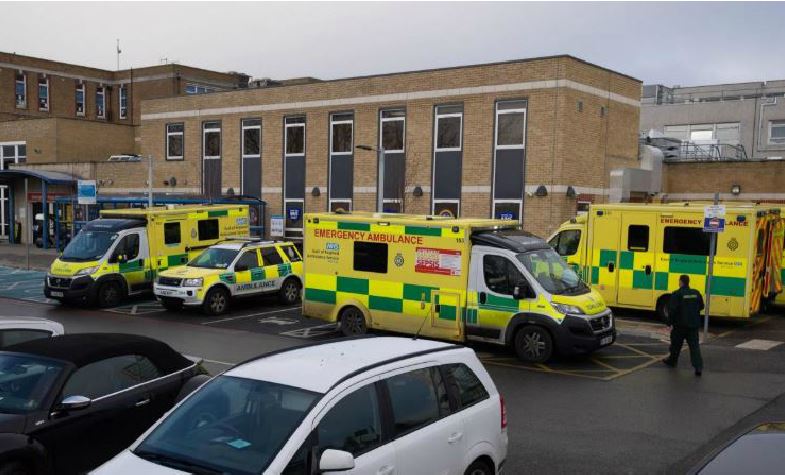 A record number of people spent more than half a day in Essex A & Es last month waiting for a ward bed to become vacant.

There are warnings that the NHS in England is now under unsustainable pressure with a record 999 calls and long waits in A&E.

Across Essex, 68,518 people visited A & Es in the area in October – the highest monthly total since monthly records began in June 2015.

Of those who did so, the proportion who waited less than four hours from arrival to admission, discharge or transfer was 77.4 percent for the Mid and South Essex NHS Trust, and 61.1 percent for The Princess Alexandra Hospital NHS Trust and at 78.7 percent at East Suffolk and North Essex NHS Trust.

The inmates also had long waiting times for a ward bed: 227 people had to spend more than 12 hours before they were given a bed – the highest number in its history.

The East of England Ambulance Service answered 101,377 calls to 999 – a record number – in October, with teams responding to 8,487 life-threatening emergency calls over the past month.

Matthew Taylor, Chief Executive of the NHS Confederation, said: “The NHS is now under unsustainable pressure and is running so hot that it has reached a tipping point.

“These numbers underscore the extraordinary and unprecedented demand the healthcare sector is currently facing, with a waiting list of now 5.8 million.

“As our survey shows, healthcare executives are ringing the alarm bells and warning that patient safety is also seriously jeopardized by staff shortages.

“If we don’t take action now, those pressures will get worse in the dead of midwinter months and we urge the government to do whatever it takes to prevent the NHS from plunging further into crisis.

“As our sister service, Social Welfare is now in dire need of additional funding and support to ensure medically healthy patients can be safely discharged into the community, freeing up capacity in the NHS.

“We also need clarity from the Center on how an expanded NHS workforce will be funded in the longer term in the hope that we will never face a staffing crisis of this magnitude again.”

Dr. Denise Langhor, Director of Emergency Medicine at the British Medical Association, and Dr. Vishal Sharma, chair of the advisory committee, said that while the government says the NHS is under “sustained pressure,” the numbers suggest a health service that is nowhere near sustainable.

They said: “In emergency rooms across the country, people need to be cared for because of a lack of space in corridors, which not only creates extremely stressful working conditions for staff but is also unsafe and leads to poorer outcomes for patients.

“All of this is only going to get worse as we grapple with the worst winter pressures ever imminent, an ever-growing backlog of unmet needs and an inevitable spike in Covid hospital admissions.

“It is our patients who suffer, and each number in this data represents a person in pain and distress.”

Professor Stephen Powis, the NHS national medical director, said with the highest number of 999 calls ever answered in a single month, the busiest October on record for major A&Es and the introduction of booster vaccinations, there is no doubt that the pressure on the healthcare system remained incredibly high.

He said: “But despite the high demand, the NHS staff are doing everything they can to see more patients and carry out millions more tests, checks, treatments and surgeries.

“There are more and more numbers on treatment showing and it is expected that this will increase, but it remains really important that people don’t hesitate to seek help from the NHS when they feel uncomfortable.

“Anyone in need of help should get in touch through 111 online so the staff can offer you the best option for your care.

Neill Moloney is acting executive director of the East Suffolk and North Essex NHS Foundation Trust, which operates the hospitals in Colchester and Ipswich.

He said, “Achieving all national access standards, including admitting and discharging 95 percent of all patients who visit our A&E departments within four hours, is very important to us.

“The number of people we treat in our hospitals, including those with Covid-19, has increased and we are also seeing more acutely ill patients. This has a huge impact on our A&E departments, but our teams are working incredibly hard to see and treat the people in our hospitals as quickly and safely as possible.

“Of course, if someone is seriously ill and in need of urgent or emergency care they will have to go to the hospital, but the best way to support the NHS this winter is to use the services appropriately.

Stephanie Lawton, Chief Operating Officer of the Princess Alexandra Hospital NHS Trust, said, “We are constantly striving to improve the patient experience in our emergency department (ED), including waiting times for admission. We have seen an increase in our emergency room attendance over the past few months.

“Our dedicated teams work hard to assess, treat, and enroll patients and ensure that those who are well enough can leave the hospital and return home. We strive to improve the flow of patients through our hospital and to discharge our patients on time.

“We encourage patients to contact NHS 111 first to find the right location for their health needs. Most minor injuries and illnesses can often be treated quickly and safely by a general practitioner, a local pharmacy or with the right self-care, even outside the hospital environment. ”

Comment was sought from the Mid and South NHS Hospital Trust.