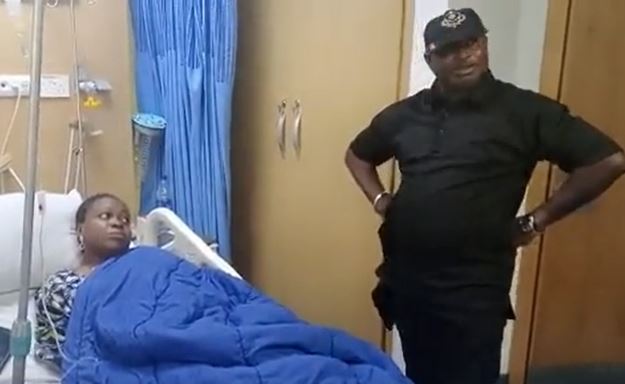 Adeyinka Igbinoba, a businesswoman residing in Lagos, has narrated the harassment she has continued to suffer in the hands of some officers of Special Weapons and Tactics Team (SWAT), who on the orders of Johnson Kokumo, a deputy inspector general of police, have continued to monitor her despite being in a hospital bed.

Igbinoba told FIJ that the reason the officers have been harassing her is because of a N30 million land purchase dispute she has with Saheed Mosadoluwa, a Lagos property agent who owns Harmony Garden and Estate Development Limited.

Igbinoba also said that the security operatives have been ‘pressing her’ to write a new statement that is capable of changing the outcome of a case that is still in court on the matter.

“At the moment, the matter in contention is already in court. Saheed Mosadoluwa, the man who assaulted me and put me on crutches 11 months ago, together with Sade Gbadamosi, the owner of Amen Estate, have been trying so hard to make sure that this matter doesn’t get to court. That’s why it took 11 months for the matter getting to court,” Igbinoba told FIJ on Monday.

“I went to the press to let the public know how this man assaulted me and what he had been doing to pervert the course of justice. All the journalists that wrote that story also called him to give his own side of the story, which he did.

“I explained to them that I couldn’t follow them to Abuja on a case that had already been investigated with me as a principal witness. They kept calling and calling.

“I still have issues with my leg and I needed medical attention so I was taken to the hospital. They asked us where we were so we told them the name of the hospital.

“So, they came to the hospital and started to harass me, saying that I must drop a statement that I went to the press to defame Saheed Mosadoluwa.”

Igbinoba said that the officers sent to monitor her at the hospital claimed to be acting on the orders of DIG Johnson Kokumo.

A previous news report detailed how Mosadoluwa brutally attacked Igbinoba at his office in Victoria Island on November 20, 2021, after she asked for a refund of a N30 million payment she made as deposit for a piece of land.

The IG Monitoring Unit of the Nigeria Police Force had investigated the case and forwarded its findings to Lagos State Ministry of Justice in early 2022. After this, a lawsuit was then filed by Lagos Ministry of Justice at the Magistrate Court in Yaba.

READ ALSO: AUDIO: ‘She Told Me To Open the Gate in My Uniform’ — Policewoman ‘Assaulted’ by Prof Duke Abiola Speaks

During the first hearing of the case, Mosadoluwa denied harming Igbinoba. He also went to say Igbinoba had accused him of being rude and abused him during the November 2021 incident.

“I told her to leave my office. I even saw her rushing out; she probably fell on the stairs. I don’t know and there was nothing wrong with her until she left my office,” Mosadoluwa said.

But Igbinoba insisted that Mosadoluwa broke her ankle and assaulted her brother-in-law at his office.

FIJ later obtained pictures and videos of Igbinoba’s smashed ankle as she was about to undergo an urgent surgery on November 21, 2021.

“As we speak, the same way he is chasing me, he is chasing all the other journalists who wrote the story as well,” Igbinoba said.

FIJ made several phone calls to Muyiwa Adejobi, Police spokesman, for comments on the allegation made against DIG Kokumo, but he ended the call. He had also not responded to the text message sent to him at press time.