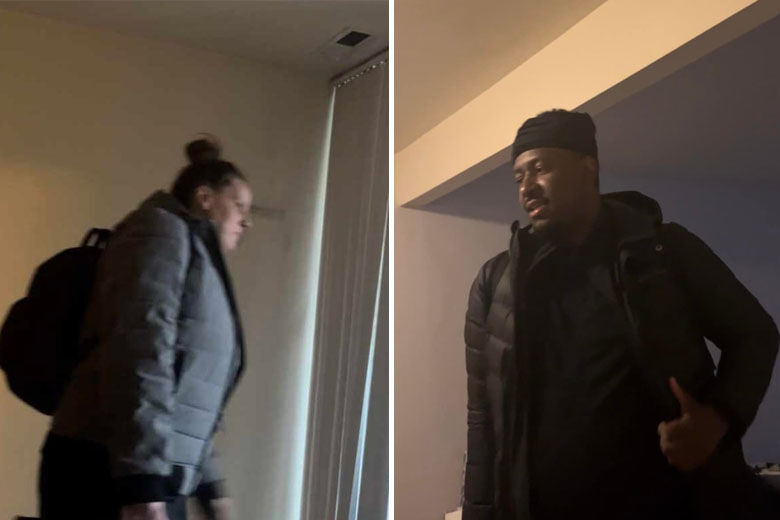 Two roommates, who returned to their Greenbelt, Maryland, apartment earlier this month after a weeklong vacation, found nearly all the belongings gone and two strangers sleeping in one of their beds.

Two roommates who returned to their Greenbelt, Maryland, apartment after a weeklong vacation earlier this month found nearly all their belongings gone and two strangers sleeping in one of their beds.

Greenbelt City police say they’re investigating the incident, and have released pictures of the suspected squatters from videos the roommates recorded upon their return home.

The first sign something was wrong when the roommates returned to their apartment in the 9300 block of Edmonston Road on April 5 and noticed some damage to the front door, said Hannah Glasgow, with the Greenbelt City Police Department.

“And they walked into their apartment, and the apartment was completely empty,” she told WTOP.

That’s when one of the roommates pulled out a phone and started recording, Glasgow.

When they had left on their vacation March 28, the apartment was fully furnished. But when they returned, practically everything was gone; the closets were cleared out and even the cabinet doors in the kitchen were missing, according to police.

The strange couple woke up when the residents called out: “Hey, what are you doing here? Where’s my stuff?” Glasgow said.

The man then told the roommates they had taken their belongings, then he and the woman started packing up their things, she said.

“And they, at first, were very calm,” Glasgow said. She said the man even showed the roommates how he had broken the locks on the front door to gain entry.

Eventually, the interaction “got a little bit more aggressive,” Glasgow said, and the man and the woman took off.

The value of the roommates’ missing property was estimated at more than $49,000, according to police.

In addition, full trash bags were left behind and trash was smeared on the walls, Glasgow said.

“It’s just so devastating to come home from what was probably a really nice vacation and be excited to sleep in your own bed, and then just be totally rocked not only with the fact that someone’s been in your space, but they’ve taken everything ,” Glasgow said.

Glasgow recommended residents build a relationship with neighbors and let them know you’re going out of town. The Greenbelt Police Department also offers a service to do periodic checks on your home if you go out of town.

Get breaking news and daily headlines delivered to your email inbox by signing up here.

© 2022 WTOP. All rights reserved. This website is not intended for users located within the European Economic Area.