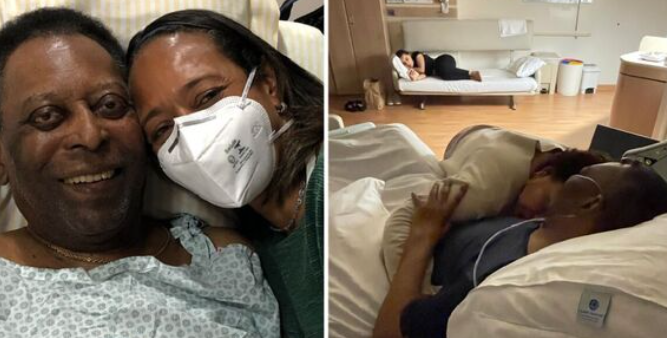 Pakyong, 26 Dec: At the Albert Einstein Hospital, where the three-time World Cup champion is receiving care, it was revealed on Wednesday that his colon cancer was “progressing” and that he needed “more comprehensive therapy to treat kidney and heart failure .”
The daughter of Brazilian football star Pele posted a photo of her father in his Sao Paulo hospital bed on Instagram. She wrote “one more night together” as the caption.
Only one-half of Kely Cristina Nascimento’s father’s face can be seen in the photo as he is cuddling her. Pele’s illness has gotten worse and she also has kidney and cardiac problems.
Nascimento and Flavia Arantes, other Pele’s daughters, had posted minutes earlier on Instagram that their father would spend Christmas at the hospital.
An image of Arantes rubbing their father’s left foot while he watched the World Cup final was posted by Nascimento on Sunday.
Argentina’s Lionel Messi received accolades from Pele for his “earned” triumph over France.
During this World Cup, Pele saw Neymar break the previous international goal-scoring mark for the Selecao.
Pele was brought to a hospital in Sao Paulo on November 29 after having his chemotherapy treatments, which he has been undergoing ever since having surgery to remove colon cancer in September 2021, re-evaluated.