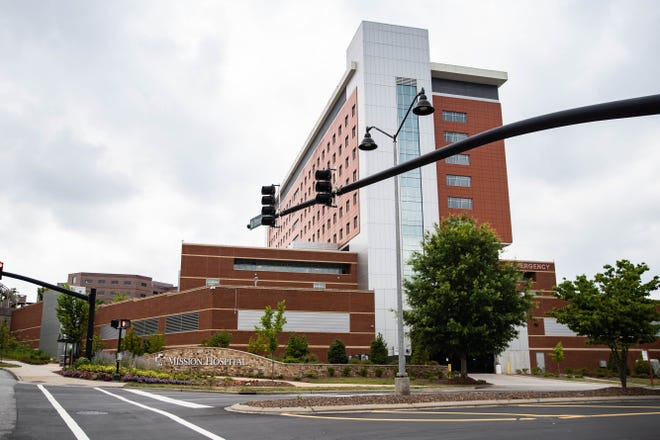 ASHEVILLE – HCA Healthcare-owned Mission Health, Novant Health and AdventHealth’s competitive bids to expand hospital services in Buncombe County went under the microscope at a public forum July 14, an online event where doctors, nurses, patient advocates and legal experts weighed in on whether the selection system was working for or against patients.

Organized by Dr. Mitchell Li of Take Medicine Back and Will Overfelt of the 13,200-member Mountain Maladies Facebook group, the forum was engineered to scrutinize the hospitals’ certificates of need or “CONs,” documentation submitted to the North Carolina Department of Health and Human Services’ Division of Health Services Regulation.

Nearly 100 people attended the event, including its organizers and speakers.

More:3 hospitals compete for Buncombe expansion: Which does your doctor, mayor support?

In the CON documents, Mission, AdventHealth and Novant each argue their case to bring 67 new acute care beds to Buncombe County, a need identified by the 2022 State Medical Facilities Plan that would also serve Graham, Madison and Yancey counties.

The DHSR is accepting public feedback on the three CONs, including letters of support that anyone can email to [email protected], and will hold a public hearing Aug. 12.

Though the CON process — used by North Carolina and many other states — establishes a seemingly competitive review process for medical facility growth, it has skeptics.

More:Want to support Mission, Novant, or AdventHealth expansion? You have 3 options and 40 days

A panel of experts – preceded by a short address from NC Treasurer Dale Folwell – was the July 14 forum’s centerpiece and included community members, an economic researcher, a nurse, a restaurateur and a legal expert.

Feinwachs said the basic premise of the certificate of need process is that, “if you have less health care available that it will reduce the cost of health care and increase its quality, which is on its face, a ridiculous notion.

“That is like saying that the price of gasoline is attributable to the proliferation of gas stations, or that if only McDonald’s or Burger King could operate in the fast-food world, everything would be better, prices would drop, quality would improve. It’s nonsense.”

Feinwachs also argued that the certificate of need process over time has not, since it was passed into federal law in 1974, increased access, improved quality and reduced prices.

Feinwachs, who did not speak specifically to the WNC hospital CONs, agreed with this characterization and said the CON process helped prop up “cartel” behavior because it “leads to consolidation and the formation of vertical monopsonies.”

Feinwachs encouraged forum attendees to be skeptical about CONs and asked them to seek out hard evidence about why hospitals want to expand or set up shop in Buncombe.

AdventHealth, Mission Health and Novant Health were each invited to speak at the forum but declined. Mission created a video about CONs instead, and Novant answered a list of questions from forum organizers.

Li made it clear the forum’s organizers did not support Mission’s expansion bid, but didn’t say whether or not they favored AdventHealth or Novant.

None of them were great, he said.

Kelley Tyler, a 37-year Mission employee and National Nurses United member, was another panelist. Tyler recently addressed the US Federal Trade Commission and Justice Department during an April 14 hearing on mergers and acquisitions in health care.

Then and during the July 14 forum, Tyler characterized the working situation at Mission as dire, with high numbers of patients and increasingly low numbers of staff to care for them.

“It was very apparent that no one really cared about patient outcomes anymore,” Tyler said, reflecting on the 2019 shift when HCA bought Mission for $1.5 billion. “We were leaders in Western North Carolina. I was very happy to be and very proud to be a Mission employee. At the end, I couldn’t feel good about the job that I did at the end of the day.”

Since the HCA purchase in 2019, Mission has come under scrutiny for a variety of issues and seen significant pushback. The hospital system faces two antitrust lawsuits alleging HCA has created a health care monopoly: one was filed by Asheville residents and one by the city of Brevard. Nurses at Mission in Asheville have unionized and recently were involved in an effort to highlight inadequate protective equipment standards, which led to a North Carolina Department of Labor Occupational Safety and Health division citation in March.

Despite these issues, the hospital believes it needs to expand to meet the demand of a burgeoning population in the Buncombe, Graham, Madison and Yancey region.

“Mission Hospital has seen significant growth in demand for its acute care services – so much so that it often cannot accommodate certain transfers, and patients must wait for extended periods of time in the ED for hospital admission,” the hospital’s CON states.

It faces competition from AdventHealth, which already has a Hendersonville location, and Novant, which is headquartered in Winston-Salem and has 18 hospitals in North Carolina. In their CONs, the other two systems emphasize Mission’s issues and the importance of “promoting choice and competition.”

Though community members and elected officials and health system employees already have submitted hundreds of letters supporting one hospital, the forum emphasized a wariness of health care corporatization.

Related:Buncombe commission to show support for new 67-bed hospital, but not one owned by HCA

“There is a larger question at hand that I would like to emphasize: What do we do about this disaster of a healthcare system in general?” said Li in a Facebook message July 15. He co-founded Take Medicine Back and said the organization’s “long-term arc is to act as a grassroots think tank to uncover the mechanisms of corporate exploitation in healthcare, identify the actors, and advocate for actions.”

Li said the organization, in various advocacy actions like the forum, is addressing:

“This is a true public health emergency,” said Li of WNC’s hospital issues.

Both he and Overfelt — who is also a plaintiff in the Asheville antitrust lawsuit — noted Folwell’s strong condemnation of corporate health care practices in North Carolina and the larger political implications of HCA’s action and reputation in WNC.

Both Folwell as an individual and Josh Stein as NC Attorney General have filed friend of the court briefs supporting the plaintiffs in the Ashville HCA antitrust lawsuit, which currently is in NC Business Court.

“The things happening at Mission hospital could likely determine a lot of political fates and fortunes,” Overfelt said in a July 14 Facebook post, musing on a potential gubernatorial faceoff between the two. “I’m not alone in my thoughts and feelings.”

Following the forum, Take Back Medicine July 15 released a letter to Stein “requesting an investigation into what we believe are widespread violations of the prohibition on the corporate practice of medicine in North Carolina.”

Stein when he visited Buncombe in April said he was searching for new legislative measures to prevent the fallout from mergers like HCA and Mission from happening in North Carolina again.

Andrew Jones is Buncombe County government and health care reporter for the Asheville Citizen Times, part of the USA TODAY Network. Reach him at @arjonesreports on Facebook and Twitter, 828-226-6203 or [email protected] Please help support this type of journalism with a subscription to the Citizen Times.