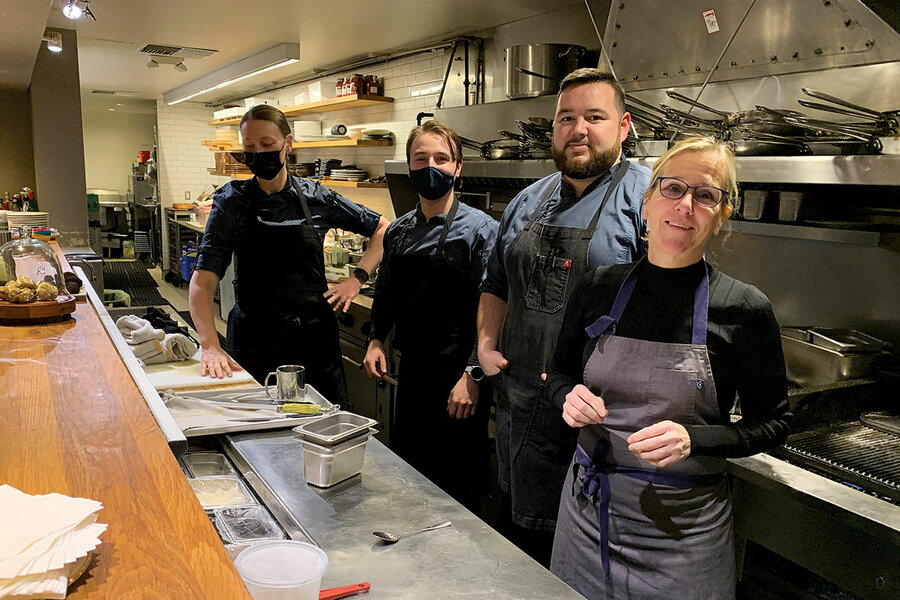 Like the rest of the Pacific Northwest, the city of Kirkland, Washington, has seen more than its share of housing developments, condominium towers, office parks, and strip malls, generally to the incremental degradation of streams like Juanita Creek.

A windstorm brought it all to Holly Smith’s doorstep, when a giant maple was blown down between the creek and Cafe Juanita – the legendary restaurant helmed by Ms. Smith, a nationally acclaimed chef. Once the tree was down, water eroded more and more land, inching the creek nearer to the restaurant.

Why We Wrote This

Environmental challenges can seem overwhelming. But singular efforts can have a big impact – as this chief discovered when she revived her tiny portion of a creek.

With help from the King Conservation District and the nonprofit Adopt-a-Stream Alliance, Ms. Smith installed huge tree stumps chained to massive boulders in the creek, which not only stopped the erosion but also turned the stream into an ideal refuge for salmon and trout. Alongside the creek, she planted some 500 willow and dogwood saplings and, wherever possible, replaced lawn with other native plants.

When it was all done, the salmon returned.

“These streams, even in the city, are important,” says Jesse Dykstra, with the state’s Department of Fish and Wildlife. “Holly did just what we want to see in these smaller urban streams: pockets of habitat.”

In 22 years of looking for them, Holly Smith had seen only one salmon attempting the upstream journey to spawn in Juanita Creek.

Not seeing salmon spawning here was hardly a shock. Like the rest of this region, the city of Kirkland, a bedroom community across Lake Washington from Seattle, has seen more than its share of housing developments, condominium towers, office parks, and strip malls, generally to the incremental degradation of streams like Juanita Creek.

Why We Wrote This

Environmental challenges can seem overwhelming. But singular efforts can have a big impact – as this chief discovered when she revived her tiny portion of a creek.

Environmentalists, the fishing industry, and Pacific Northwest tribes have warned of dwindling salmon fisheries for years. But Ms. Smith was about to discover that the quiet insistence of nature would conspire with values ​​her parents had instilled in her and improve life for at least a few endangered fish.

Ms. Smith is a nationally acclaimed chef, and her legendary restaurant, appropriately named Cafe Juanita, sits on the creek’s bank. After a windstorm topped a giant maple that had stood between the creek and the restaurant, she watched the water erode more and more country.

She knew what she needed to do: shore up the bank. But environmental regulations – intended to protect salmon – led to bureaucratic gridlock. Meanwhile, the ravenous Juanita Creek kept eating its way nearer to the restaurant.

“The erosion was pretty dramatic,” she says. That’s when she turned to the King Conservation District, a public, non-regulatory agency that partners with private landowners on conservation projects.

Beginning in early 2021, Ms. Smith worked with Ashley Allan, King Conservation District’s riparian stewardship coordinator, to put together a plan. That included permits, a planting schedule – and a budget. It quickly added up to $75,000.

Spawning season meant the creek work could only occur between July 15 and Sept. 15. And permitting took so long they missed the 2021 window entirely.

By now the erosion had become so menacing that the state gave permission to plant some native dogwood and willow in the streambed. Ms. Smith enlisted her son, and “we put on waders and we went in and tamped them in.”

Massive stumps chained to boulders line a section of Juanita Creek in Kirkland, Washington, Nov. 17, 2022. The stumps were installed to slow erosion, while willow and dogwood trees were planted alongside the creek to create a welcoming habitat for bees, insects, and other native species. The restorations are aimed at reviving the creek’s salmon, which had practically disappeared.

A spot for renewal

The bigger plan called for multiple stages. First came removal of ivy, blackberry, and invasive knotweed, a noxious plant with roots so shallow they encourage fast-moving waters to sweep them – and the bank – downstream. Next came improvements to the riparian zone, the land between the creek and the restaurant, by adding hundreds more plantings of native species. And finally it was time to bolster the bank with boulders and massive stumps with roots intact, which not only stop the erosion but also create deeper pools where fish can stay cool and rebuild strength for their spawning ordeal.

By that point, Ms. Smith was looking at a price tag of about $100,000, which represents a lot of price fixed dinners in her restaurant.

But to her, it was a simple matter of stewardship. “I grew up on about 50 acres,” she says, “and my parents were both keenly aware of the natural world. They didn’t litter. We planted trees.” And they imbued in her “the ideal that we’re responsible for our actions in the natural world.

“So,” she decided, “in having this piece of the creek, this is all I can really do.”

Before she needed to sign any big checks, she had some good news: Ms. Allan of the King Conservation District called. The State Conservation Commission had funding available for salmon recovery projects. Ms. Smith’s met all the criteria, and Ms. Allan helped her get a $63,000 grant.

Now the race was on to line up a team that could install the stumps and boulders within that small window permitted by spawning season. Ms. Smith emailed Adopt-a-Stream Alliance, a local nonprofit that has worked on hundreds of similar projects. Tom Murdoch, the executive director, said yes.

“If [others] would follow Holly’s example to protect and enhance Juanita Creek,” Mr. Murdoch says, “the result of those collective actions would significantly enhance the salmon run in that creek, and also improve the quality of the water, which also makes it safe for kids to play in the creek.”

In two weeks last September, Mr. Murdoch’s team installed those huge tree roots chained to massive boulders so water would stop eroding the creek’s banks, which not only stopped the erosion but also turned the stream into an ideal refuge for salmon and trout. The team’s bioengineering also keeps sediment from flowing downstream, where it could cover shallow gravel bars in which salmon lay their eggs, potentially suffocating salmon fry.

In concert with the bioengineering, Ms. Allan helped re-imagine the riparian elements of the stream bank: planting some 500 willow and dogwood saplings and, wherever possible, replacing lawn with other native plants.

The morning Adopt-a-Stream completed its work, Ms Smith met with a local reporter who had heard about the reclamation project.

“This is amazing,” she told the reporter, who didn’t seem to believe all these salmon swimming past were not everyday visitors. They counted 12 salmon in those 45 minutes. There had been none in the two weeks leading up to this, when Ms. Smith and the Adopt-a-Stream crew worked on the project every day.

Their good work was right there in the current.

“You’d watch [the fish] rest, because they’d bust their butt and try again, and then they’d go back down and you could tell – they were exhausted,” Ms. Smith says. “And they’d just sit there for 20 minutes and then come back and do it again. I saw that happen four or five times.”

Perhaps as a reward for her responsible citizenship, Ms Smith saw her costs drop even further when the King Conservation District came through with more funding. In total, she figures she spent about $34,000 out of pocket. Her money, time, and effort add up to much more.

“These streams, even in the city, are important,” says Jesse Dykstra, habitat biologist for the state’s Department of Fish and Wildlife, who issued the project’s permits. “Holly did just what we want to see in these smaller urban streams: pockets of habitat.”

Ms Smith is no stranger to accolades. She’s a five-time semifinalist for the James Beard Foundation’s outstanding chef award, and winner of the foundation’s best chef in the Northwest. Her restaurant, too, has a long list of national and regional honors. But she says it would be even better to be remembered as a conservationist.

“I’d be happy to be an example of what is possible. … If I could be a little nagging reminder to people and say, ‘You could do it. You should. Why don’t you try?’

“That would make me happy.”