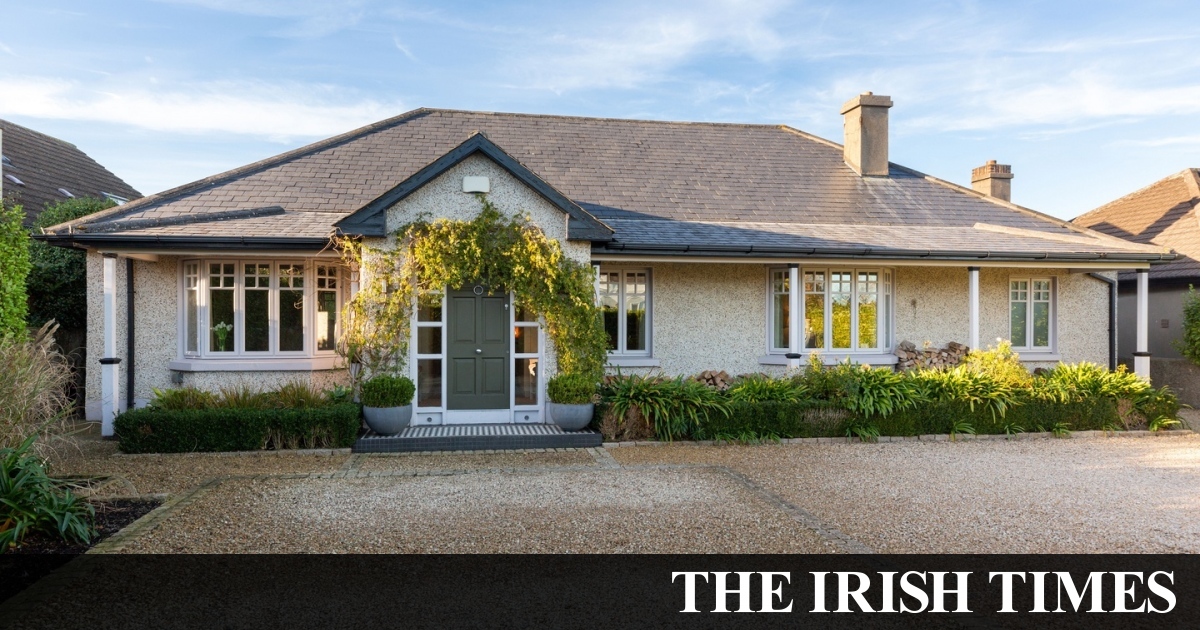 The dimensions alone are a clear indication that No 62 Castlepark Road has been significantly expanded and is no longer the humble bungalow that was built in the 1930’s. The detached property now has 324 m² (3,489 sq ft) of living space with six double bedrooms spread over two floors, making it a target for larger families with sizeable budgets who are upgrading. There are several bungalows of similar age along this road, most of which have been modernized and expanded over the years.

The prime location between the villages of Dalkey and Sandycove and their potential has meant that these have long been viewed not for downsizing but rather for the opportunity to expand and refurbish to create spacious homes for growing families. And they fetch the top prices that the rest of the suburb attracts: No 62 is on the market via Sherry FitzGerald for 2.5 million euros.

The refurbishment was carried out by the owners in 2005 but the immaculate and modern interior in terms of paint colors and finishes shows regular work has been done since then. Remodeling of the existing hall level accommodation, the master bedroom with ensuite bathroom has been moved to the front; The second of the bedrooms on this floor is also at the front while the third is at the rear in the extension that runs the width of the house at the rear.

The fit out made room for a large and airy eat-in kitchen with sleek gray painted wooden units and plenty of storage and prep space, opening onto both the back garden and an adjoining living room. There is also a family room with paneled walls separated from the dining area by a paneled area with a modern gas fireplace.

On this level, which is laid out in walnut, there is underfloor heating. If new owners don’t need six bedrooms, they can easily use one of the downstairs bedrooms as a spacious study. the one to the rear opens directly onto the patio and would be a nice workspace. In the planning of 2005, this room was probably intended as a playroom for the then small children.

A small room off the hallway off the utility room was designed as a small study but now serves as an additional wardrobe for the master bedroom.

On the upper floor there are three more bedrooms, the largest en suite, and a bathroom.

The owners are clearly enjoying their 42 m (138 ft) rear garden; It faces west and has a large terrace and a paved dining area, both covered with electric awnings. The gas fireplace, outdoor refrigerator, seating, and grill suggest social use.

To the front there is parking for four or five cars on the gravel behind electric wooden gates. The house has a BER of C1.

Houses on Castlepark Road bear a Dalkey or Sandycove address, depending on where they are on this winding road. No. 62 is Sandycove, is at the top of the road near Barnhill Stores and walking distance to Glenageary Dart Station.