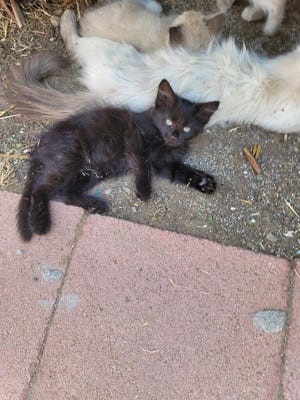 A Department of Animal Services official used bedsheets to rescue a kitten that was trapped in a chimney, officials said Thursday.

Officer Chris Peck answered a call Tuesday regarding a kitten trapped in a chimney in the Jurupa Valley.

Rudy, a 6 month old kitten, managed to climb onto the roof and then down the chimney that was sealed when a house was being remodeled.

Peck did not initially have a device long enough to reach the kitten, but was fitted with sheets that the officers used as a makeshift rope for the kitten to climb up. They went up on the roof and lowered it down the chimney.

The kitten was found in the garden early the next morning after safely climbing out.

Officials said that if the rope had not worked, they would have drilled a hole in the wall to retrieve the kitten.