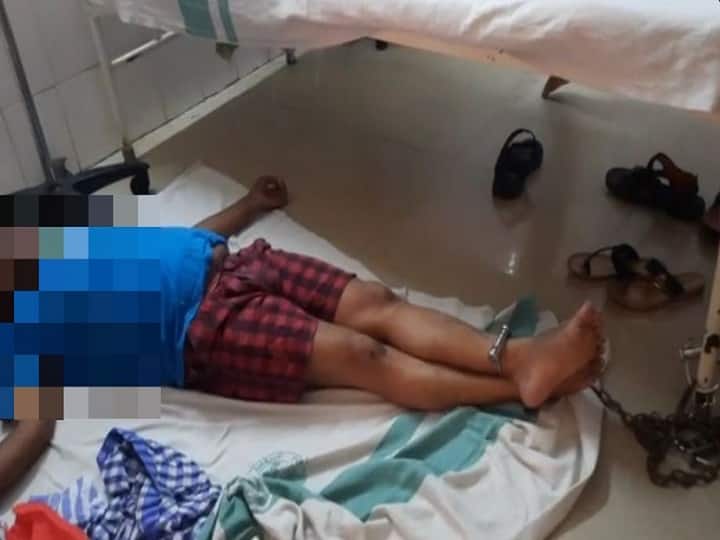 Balasore: An Odia television journalist was allegedly assaulted by the police and was later chained to a bed at a hospital in Odisha’s Balasore. According to reports, the journalist was brutally thrashed inside a police station and later was leg-cuffed to his hospital bed upon falling unconscious.

The incident triggered a massive controversy after the visuals of the victim from the hospital was aired by some local news channel, forcing police to order a probe by a DSP-rank officer into the incident.

The journalist, identified as Loknath Dalei, claimed that he was thrashed because he had reported alleged corruption in Nilgiri police station in Balasore district, news agency PTI reported.

As many as 11 home guards of the police station have got appointments by furnishing forged certificates, the journalist told Sambad English.

On April 4, the journalist and a home guard Nilagiri police station got into an argument after their vehicle collided in a market. The journalist was asked to come to the police station on April 5, where his mobile phone was snatched away and he was thrashed by inspector-in-charge Droupadi Das.

Dalei fell unconscious after being allegedly thrashed by the police and was admitted to Balasore district hospital, where his leg was cuffed with his bed by a policeman guarding him.

Reacting to the incident, Balasore SP SS Mishra told reporters that the matter will be investigated by a Deputy Superintendent of Police-rank officer and strict action will be taken against those found guilty.

Even Union Minister Dharmendra Pradhan, who hails from Odisha, alleged that this was not the first such happening and earlier also, several Odisha journalists were harassed.

The incident came to light lately after a video showing him leg-cuffed went viral on social media and was reported by news channels. The victim was later released from the hospital after the news spread across the state.