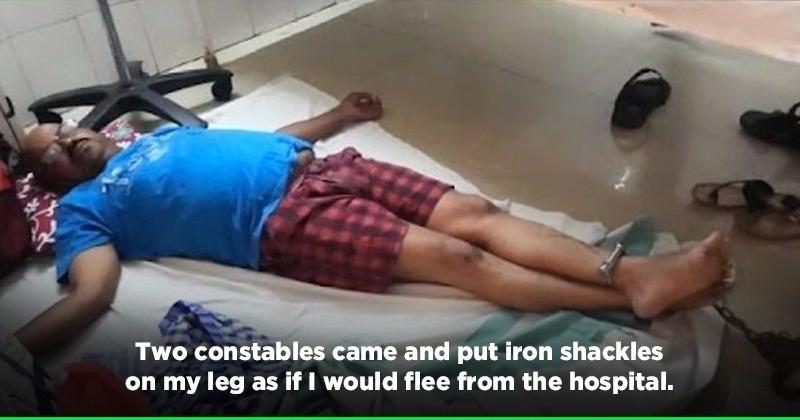 In a shocking incident, a journalist from Odisha who was allegedly assaulted in police custody was kept in chains after he was admitted to a hospital.

The journalist, Loknath Dalei, who is a correspondent of a local daily and TV channel in Balasore, had gone to the Nilagiri Police Station, on Monday in connection with a minor accident involving his motorbike.

His bike had collided with the two-wheeler of Niranjan Rana, a Home Guard at the Nilagiri Police Station, on April 4.

Following this, the two had a minor altercation, which was settled after intervention of some locals.

Dalei had taken away the home guard’s helmet demanding that he pay for the repair of the damages caused to his bike.

However, Rana had filed an FIR against Dalei, and on Wednesday the journalist was asked to come to the police station.

At the police station, Dalei says he was confronted by the Inspector, who says the journalist had a grudge against him for his previous reporting.

“The police made me sit for five hours. When I tried to get in touch with my friends, the local police officer thrashed me and I fell down. I almost fainted. Later on Wednesday evening, I was admitted to the Balasore district hospital, “Dalei told The Telegraph.

Even in the hospital, he was not given a bed and was lying down on the floor.

“Nearly seven guards carrying guns are guarding me here. On Thursday morning, two constables came and put iron shackles on my leg as if I would flee from the hospital,” he said.

After photos of Dalei lying on the floor with shackles on went viral, he was reportedly given a bed and had the handcuff removed.

He was also released from police custody.

Kanak TV’s reporter in Balesore’s Nilagiri Loknath Dalei was arrested by police, beaten up following a scuffle with a policeman and sent to hospital with his leg kept shackled to an iron bed. I strongly condemn the police action. @CMO_Odisha @DGPOdisha pic.twitter.com/2z8tBsDW8i

Under fire for her actions, Nilgiri police station, Draupadi Das, told reporters that she had not issued orders for the journalist’s legs to be chained.

The incident has triggered a massive outcry with Union minister Dharmendra Pradhan alleging that this was not the first such happening and earlier also, several Odisha journalists were harassed.

Balasore’s BJP MP Pratap Sarangi, who spoke to the SP, condemned the incident and demanded strong action against the guilty.

Following protests from several corners, Balasore SP SS Mishra told reporters that the matter will be investigated by a Deputy Superintendent of Police-rank officer, and strict action will be taken against those found guilty.

For more on news, sports and current affairs from around the world, please visit Indiatimes News.