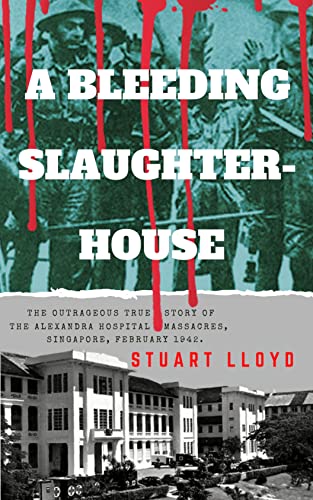 Military historian Stuart Lloyd recounts how, on February 14, 1942, rampaging Japanese troops forced into Singapore at an Allied retreat around — and controversially even through — the Alexandra Hospital. The Japanese bayonetted patients in their beds and an anesthetized man on the operating table. Doctors and orderlies were forced into sheds overnight, then shot or bayonetted. In the two-day tsunami of terror, up to 300 were brutally slain at “The Alex”.

While Singapore had been a trading hub since the 14th century, it first really appeared on the British radar in the 19th century when statesman Stamford Raffles successfully negotiated to establish a trading port there in 1819, followed by the establishment of the crown colony of Singapore nearly 50 years later.

Territory requires protection, and soldiers and sailors get sick, injured and wounded, so a hospital was needed. The first British Military Hospital in Singapore was built in 1909, then closed when the new Tanglin Barracks Hospital opened three years later. By the late 1930s, Singapore was akin to a gold rush if you were in the construction business, and word was getting around that the War Office had a once-in-a-generation-sized check book for developments and improvements there.

The opening of the somewhat controversial Singapore Naval Base with its massive 1000-foot graving dock made global headlines – 130,000 tons of British Portland cement were used in that project alone. Many saw it as an expensive folly while those on the other side of the political divide saw it as a strategic necessity. Singapore itself was viewed as “one of the five strategic keys that lock up the world”.

The Army set aside 32 acres (13 hectares) near the railway line in the western cantonment of Alexandra for a new British Military Hospital. It was situated near the Admiralty’s Normanton oil tanks, the Gillman Barracks and the Alexandra Barracks. Some quietly questioned the smartness of such proximity to strategic military targets.

By early 1939, construction was continuing apace at “The Alex”, as the hospital became colloquially known. In May the main exoskeleton was well in place and the roof was completed. Many of the laborers were female, Chinese samsui women to be exact. Samsui women, from the Cantonese province of Guangdong, were much in evidence, as a restriction had been placed on men emigrating through the mid- and late-30s.

They dressed in traditional garb, coolie-style tunics, replete with oblong red headgear. Its purpose was chiefly to ward off evil spirits but a secondary function was to stop their skin turning the same color as their hats. The contrast between them and their overseers – the sappers (Royal Engineers) in their natty khaki tropical shorts and long socks with solar topee hats – could not have been more stark. 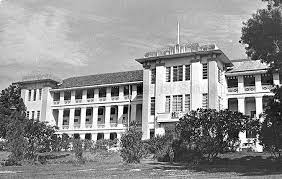 That September the world woke up to headlines that was broken out with Germany. The British Military Hospital Alexandra opened officially on July 19, 1940. The Straits Times trumpeted this as part of Britain’s military might: “The most up to date and one of the largest military hospitals outside Great Britain.” An added touch that went on just before opening was blast walls. These went up around some of the bigger buildings in town, although few believed that the “Impregnable Fortress” of Singapore would or could ever be invaded.

At the end of July 1940, the War Office published its “Singapore Defences: 16th Edition of Works Services” document. The total budget for Singapore’s defense infrastructure that year was £603,000 (almost £3.5 billion today). The Alexandra Hospital would chew up £265,900 of that (to be fair, spread over two years, but still a mountain of money).

The Nursing Sisters’ Quarters was allocated £22,000. Brigadier Charles Stringer was Deputy Director Medical Services, Malaya Command, and his wife Olga, a nurse, showed a particular interest in the construction of these quarters, adding nuanced “feminine touches” that were perhaps not sensed nor felt necessary by the laddish sappers who constructed it.

But no sooner was the 356-bed hospital completed, it was deemed not large enough for future requirements. On April 30, 1941 a secret cipher telegram from the Commanding Officer in Malaya to the War Office in London requested permission to expand The Alex up to 600 beds. Was this realism at work, or pessimism in disguise?

When Japanese bombs rained down unexpectedly on Singapore on December 7, 1941 (simultaneously with the Pearl Harbor attack), and the British ships HMS Repulse and HMS Prince of Wales were sunk just three days later, the true requirements became apparent. With the rout of the Allies down the Malayan peninsula, The Alex found himself home to an estimated 900 soldier-patients. Sardined onto stretchers between beds, under boardroom tables, outside on verandahs.

The men of the 32nd Company of the Royal Army Medical Corps were running the hospital under difficult conditions. Water was rationed, torches and lights were used only for medical procedures, and corpses wrapped in blankets remained unburied.

And so it was that on Valentine’s Day, February 14, 1942 the hospital found itself in no-man’s-land as the invading Japanese overran the Allies. A British officer walked out to meet them while pointing to his Red Cross arm band as an internationally recognized symbol to protect military medical personnel during armed conflicts. A Japanese soldier ignored this and fired at him but missed. The officer ran back inside.

For about one hour, three large groups of Japanese soldiers attacked the hospital. They went from room to room shooting, bayonetting and beating up doctors, orderlies and patients indiscriminately. About 50 were killed in this first round. Then 200 were rounded up, tied into groups of eight and forced to march toward a row of outhouses some distance from the hospital. The gravely injured were not spared and were killed if they fell along the way.
At the outhouses, the captives were crammed into three small rooms. There was no ventilation and they lacked water. They had neither space to sit nor lie down. Under these terrible conditions, some died during the night. The following morning, the survivors were told that they could fetch water, and they were allowed out in twos. However, as their screams rang out, those still inside realized that they were being executed. Suddenly Japanese shelling resumed and a shell struck the outhouses, interrupting the executions and allowing a handful to escape.

Some believe that the massacre happened because the Japanese army was pursuing retreating Indian soldiers, and a number of them had been positioned near or in the hospital. Other accounts claim that it was vengeance for the fallen Japanese, struck down in the heat of previous battles. No one was brought to justice, though the officer leading the advance on Singapore, General Tomoyuki Yamashita, was executed for other war crimes he committed.

The capitulation of Commonwealth forces in the British stronghold of Singapore, on February 15, 1942 was regarded as shameful, being the largest surrender of British forces in history.

The Alexandra Hospital was handed over to the Singapore government when the British withdrew its forces from the island in 1971 and it is now a modern civilian hospital.

Author Stuart Lloyd, of Orange, New South Wales, Australia, has been described as “the perfect storyteller” by The Telegraph, UK.