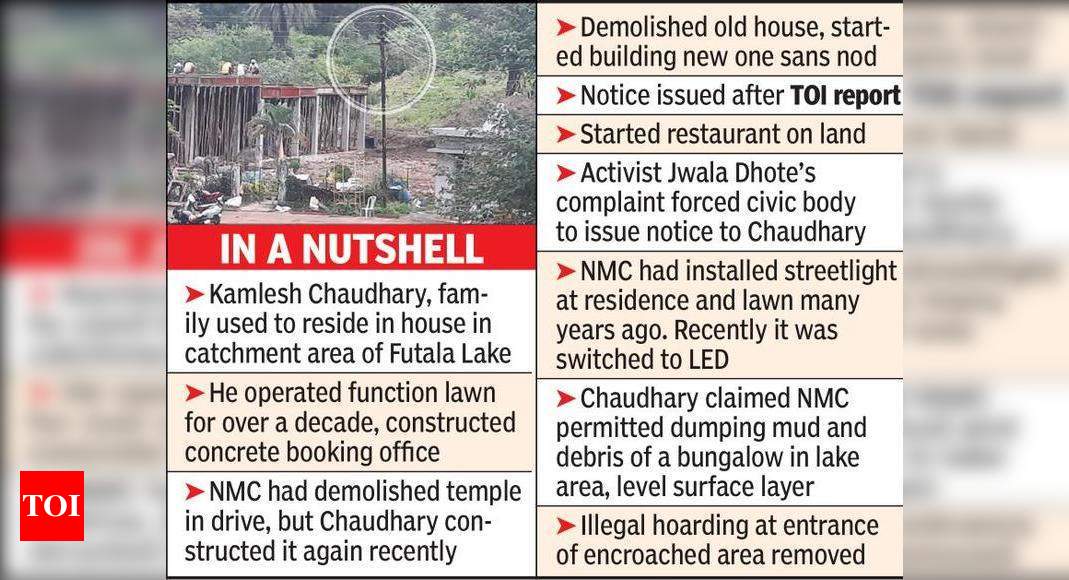 Nagpur: The nexus between Nagpur Municipal Corporation (NMC) officials and former Congress corporator Kamlesh Chaudhary is becoming apparent. The civic body has installed a public street light at Chaudhary’s lawn and house. NMC also reportedly allowed leveling of surface layer in catchment of Futala Lake, which is owned by the Maharashtra Animal and Fishery Sciences University (Mafsu).
However, NMC officials said they are firm on their decision to demolish the restaurant, booking office, compound wall and lawn, which are unauthorized, on Monday. An official from Mafsu told TOI that the university too is firm on its decision to take possession of the land on Monday.
Unfortunately, NMC officials are still creating hurdles in the process. Two days ago, Mafsu had requested NMC to demolish the unauthorized structures and also seek police protection. Mafsu clearly said it would bear all expenditure.
Still, NMC asked Mafsu to seek police personnel for the action. An official from Mafsu said the university wrote to Gittikhadan police station, asking them to provide necessary police force for the action slated on Monday.
PI Bapu Dhere said he was not aware of any such letter, as he was on leave. PI Vinayak Koli, who held charge, did not respond to TOI’s calls and messages.
Meanwhile, a visit to the site revealed a street light is situated in the area encroached by Chaudhary. It is adjacent to a temple close to the lawn and the two residential buildings under construction.
An engineer from NMC Dharampeth Zone confirmed the street light was erected by the civic body. NMC even replaced it with a LED street light little over a year ago.
A letter submitted by the DCP to CP in March 2021 says Chaudhary gave a statement to police that mud and debris of a bungalow demolished in Civil Lines was brought to the lake area, and there was no excavation and no material was taken away from the water body. He gave this statement after one Vinod Raut alleged Chaudhary excavated sand and metal from the lake.
On Sunday, Chaudhary told TOI that mud and debris of the bungalow had been dumped along Vayu Sena road.
Two persons said on condition of anonymity that mud and debris of the bungalow was used to level the surface layer in open space behind Chaudhary’s dismantled old house in the water body’s catchment area. All this area is owned by Mafsu.
The nexus between NMC officials and Chaudhary, a three-term corporator, is very old. NMC officials had turned a blind eye when Chaudhary developed and operated a function lawn on the lake bank for over a decade. He also start construction of two residential buildings without a sanctioned building plan. He also developed and started a restaurant recently.
IN A NUTSHELL
* Kamlesh Chaudhary, family used to reside in house in catchment area of ​​Futala Lake
* He operated function lawn for over a decade, constructed concrete booking office
* NMC had demolished temple in drive, but Chaudhary constructed it again recently
* He demolished old house, started building new one without sanction
* Notice issued after TOI report
* Chaudhary started restaurant on the land
* Activist Jwala Dhote’s complaint forced NMC to issue notice
* NMC had installed street light in residence and lawn many years ago, recently switched to LED
* Chaudhary claimed NMC permitted dumping mud and debris of a bungalow in lake area, level surface layer
* Illegal hoarding at entrance of encroached area removed few days ago