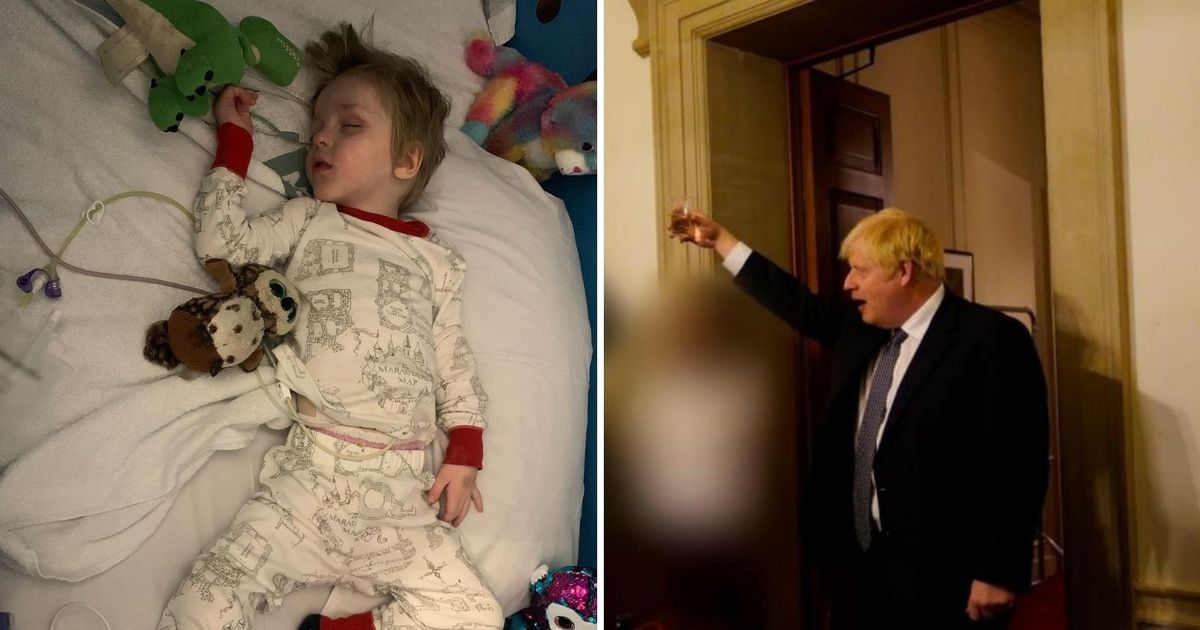 As she read the damning details of pandemic karaoke parties and BYOB events at the heart of government, Rebecca Highton remembered how she’d spent the summer of 2020 – trapped in a hospital room, unable to leave her son’s bedside.

In May 2020, Rebecca’s then-three-year-old son Alfie, who has spastic quadriplegic cerebral palsy, was undergoing vital life-or-death surgery at the Royal Victoria Infirmary. For weeks, Rebecca couldn’t see husband Zak or other son Rory at all, while she watched Alfie fight for his life from a hospital room she couldn’t leave.

The Newcastle mum said she was ‘insulted but not surprised’ by the contents of the long-awaited Sue Gray report, which found ‘failures of leadership and judgment’ in Whitehall had resulted in regular gatherings that broke Covid guidance.

At the time, lockdown rules said people could only socialize outdoors with a single person from outside their household. Yet on May 15, ‘groups of varying sizes’, including one featuring the Prime Minister, met in the Downing Street garden, drinking wine – with Mr Johnson bringing cheese and wine from his flat.

On May 20, 30 to 40 people met again to drink wine in the Downing Street garden, with some leaving as late as 11pm. Staff were warned not to ‘wav[e] bottles of wine’, because a press conference was ending as the event started. The ‘bring your own booze’ bash was acknowledged to be a ‘comms risk’ in messages between aides.

Rebecca, 27, said: “At that point I wasn’t even allowed to go outside to get fresh air away from the ventilated hospital air – and they were having a party.”

By June 18 – the date when Government staff gathered for ‘pizza and prosecco’ and ‘a karaoke machine’ at a rowdy event at which ‘one individual was sick’ – Alfie was now allowed to see his dad and brother from a distance, in the hospital cafe, for half an hour at a time, with masks on.

The next day, June 19, food, alcohol and soft drinks were provided for a 20-30-minute birthday party for the Prime Minister – the event for which Mr Johnson received a police fine.

Rebecca said: “We had been in the hospital for about a month at that stage and the hospital was like a ghost town. It was eerie, it was horrible, it was absolutely awful.

“You had nurses and doctors coming into your room in full PPE just to ask if you were ok, if you needed a glass of water, because you couldn’t go to the kitchen, you couldn’t use any communal facilities. Parents were provided with all their meals because they couldn’t even leave the room to cook or get something to eat.

“We were in this really really dire situation and people in the government are sending messages to each other saying ‘leaving drinks next week?’. There was that message where [Principal Private Secretary to the Prime Minister] Martin Reynolds said they had ‘got away with’ the drinks in the press, and he was Boris Johnson’s right-hand man, so you can’t tell me Boris Johnson didn’t know about all of this.

“And then [the Prime Minister] Parliament told that all the rules had been followed – when in the majority of the parties in this report he was present.

“One of the things that was not surprising was that she found a culture where those who actually tried to stand up and say ‘no this is wrong’ were bullied in to keeping quiet.”

Alfie, who recovered from surgery and is now doing well, spent several months in hospital, coming home before his fourth birthday. His family would have loved to celebrate their little boys’ survival, but they stuck to the rules and kept away from family and friends.

Solicitor Rebecca said tougher fines, proportionate to income, should have been handed out to rule-breakers, while she questioned why the Prime Minister had only been handed one police fine, when Ms Gray’s report says he was at several of the events.

On Wednesday, Boris Johnson told Parliament he was ‘humbled’ and had ‘learned a lesson’. He insisted he hadn’t lied to Parliament in saying Covid guidance had been followed, but had told MPS ‘what I believed to be true’

He said staff were working ‘extremely long hours’ and ‘doing their best’ to help the country in the pandemic, saying that ‘briefly attending’ such gatherings was ‘one of the essential duties of leadership’.

But the outraged Newcastle mum said the work of civil servants was nowhere near as hard as that of NHS staff – who went above and beyond rules and guidance to keep people safe from Covid-19.

She said: “It would be nice if the government had at any point thought about the doctors and nurses whilst they were doing this. As much as it was hard on the parents some of the doctors and nurses who worked with us weren’t even going home to their families. They were working in their awful conditions, doing longer shifts because they were so short-staffed with the pandemic.

“You’ve seen the marks on their faces from the PPE, they were red raw – and the Government was partying.”

Rebecca said calls for the Prime Minister to resign don’t go far enough – arguing he ought to be forcibly removed.

She added: “I think Boris Johnson should be sacked, I don’t think he should have the chance to resign, I think if a Prime Minister resigns then looking back in history it shows he has some honour. Boris Johnson doesn’t have any honor at all, he had show that.

“He doesn’t have any thought for his country whatsoever. I think all of our politicians think that are better than everybody else and if they were to come and live as everybody else does they would get a hard awakening to what it’s actually live to live and work and raise children in this country.”