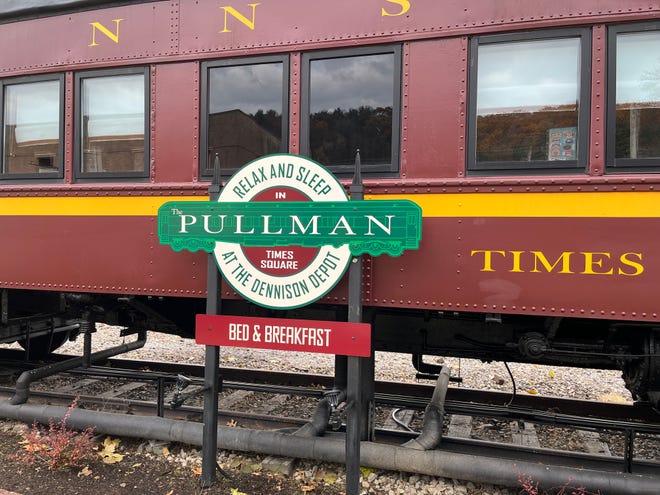 DENNISON – Starting next year, visitors to the Dennison Railroad Depot Museum can experience what it was like to spend the night in a 1920s Pullman sleeper.

Then the new Pullman Bed & Breakfast opens to customers.

Depot officials held the open house on Wednesday to showcase the project, which cost nearly $ 1 million.

The bed and breakfast will have three suites and two compartments that are bedrooms only, said Depot Executive Director Wendy Zucal. It could potentially sleep up to 16 adults at a time.

“But it’s not like staying in a typical hotel,” she remarked. “It’s a specific experience, smaller compartments, smaller beds. It is what it used to be This is from the 1920’s but I think they’ll have a really fun time experiencing and immersing what it was like to ride a Pullman in the 20’s. “

The project was funded with grants from the Ohio Department of Transportation, the Appalachian Regional Commission, the Harold C. and Marjorie Q. Rosenberry Foundation, the Tuscarawas County Community Foundation, and the depot’s emerging professionals.

Gor-Con Construction was the general contractor for the project and Joe Sekely was the architect.

Dennison Mayor Greg DiDonato applauded everyone who contributed to the project, saying the depot complex was important to the village.

“That depot complex as a whole kept Dennison from looking like an abandoned four-block city,” he said. “A lot of small towns in America are struggling. Unless you really have something that anchors you and gives people purpose to visit, eat, whatever, it’s really hard not to have an empty downtown storefront. “

The Pullman car was acquired by the Ohio Railway Museum in Worthington in 2007. The car known as “Times Square” ran on Broadway Limited circa 1925.

When the depot got the car, the officers didn’t know what to do with it. Zucal said the museum was desperate for space, but it had succeeded in adapting cars to new uses.

“When we started to look seriously at this car and what we could do with it, we realized it was a treasure trove,” she said. “It was a time capsule. It had all the compartments in it, many of the original lights and fixtures.”

So plans were made to turn it into a bed and breakfast.

Zucal noted that it took 14 years to complete the project. The actual work took about two years, but it was during this time that the COVID-19 pandemic emerged as well as supply issues.

But she said it was great to work with the contractors and ODOT.

“There were many challenges in restoring an old car into something like this,” she said. “Each meeting was another hurdle to overcome, but everyone worked together and made it. We just love it.”

Depot officials are still working on the prices for the rooms.

Although the bed and breakfast is not open in time for this year’s Polar Express excursion, it will be available for the event next year. The Dennison Railroad Depot Museum now operates the only Polar Express in the state, Zucal noted.

“We want places where people stay overnight, spend more money in our restaurants, create more jobs, and that’s what this is about,” she said.