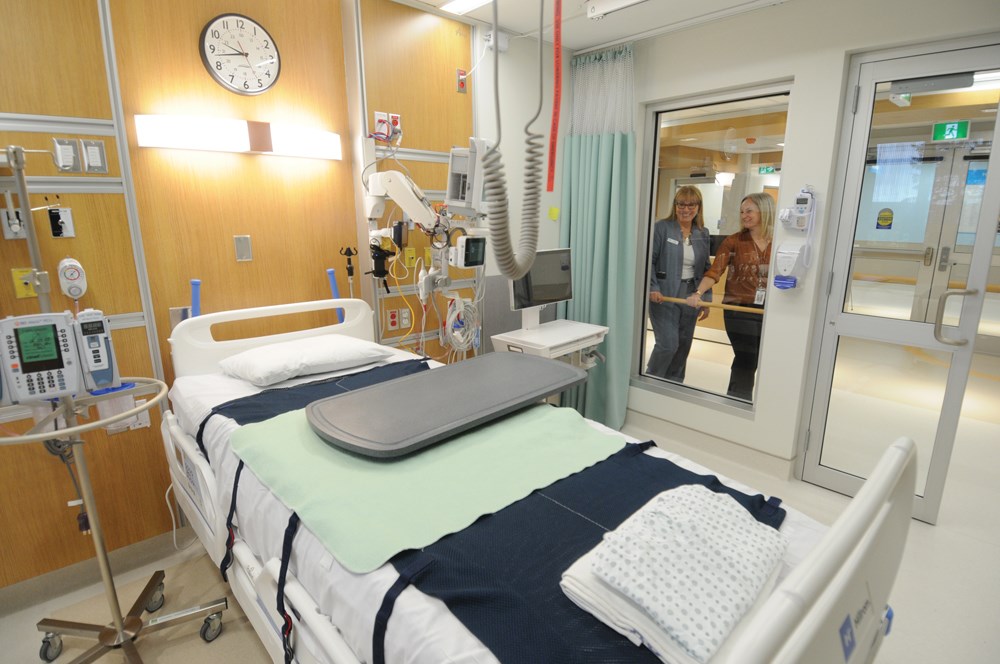 It’s one modern high-end suite you hope you never have to check in to.

But if you need it, one of the 12 rooms in Lions Gate Hospital’s brand-new “high acuity unit” could be a literal lifesaver.

This week, the first patients will be admitted to the new $9-million unit on the hospital’s second floor, after over a year of construction.

The project has been funded entirely by donations from the Lions Gate Hospital Foundation.

High acuity units aren’t as well known as intensive care, but represent a middle level of care between what a patient receives in a regular hospital ward and the intensive life support available in an ICU.

It’s for patients who need closer monitoring than they will receive on a standard hospital unit but “they don’t require life support,” said Corrie Irwin, director for surgical services, ICU and the Emergency Department at Lions Gate.

In some cases, a patient whose condition has deteriorated in hospital might be moved to the unit to be stabilized, said Irwin. In other cases, a patient’s medical history might indicate they’ll need more support than a regular ward can provide. Or a patient who has been stabilized in ICU might be moved to the HAU before going to a regular hospital bed, “until we’re confident that they are on the right trajectory,” said Irwin.

There are 12 private rooms in the new unit, although the unit will generally operate with 10 beds (leaving two beds available if “surge” capacity is needed.) For comparison, a similar-sized regular hospital unit might have between 25 and 30 beds , said Irwin.

One of those rooms in the HAU is also specifically designed for larger patients, with bigger doorways and lift capacity built in.

Each bed in the unit is within a private room with its own ensuite bathroom and includes a “family area” with a couch and chair where family members can sit. All beds in the unit are equipped with comprehensive physiological monitors, so a patient’s vital signs are fed into an electronic health record.

Ceiling lifts can take patients directly from bed to bathroom, while large glass windows provide direct line-of-sight into rooms from the nurses’ station.

A separate family lounge also provides a quiet space for family members to take a break, charge their phones or step outside for fresh air.

Funding for the new unit was provided by the Lions Gate Hospital Foundation, which launched the fundraising campaign in 2019, “before COVID was even on our radar,” said Judy Savage, chair and CEO of the foundation.

The Seaspan High Acuity Unit, as it’s officially titled, is named in honor of a $1.5-million donation towards the unit from the Washington family owners of that company, through Dennis and Phyllis Washington Foundation.

Back in 2019, the foundation originally set a goal of raising $7.5 million for the new unit, said Savage, but ended up raising $10 million. That’s a good thing, she added, as construction costs also bloomed in the interim.

The unit will operate with a high acuity doctor and one nurse for every two patients, said Irwin, starting off this week with three nurses and a capacity of six patients. More nurses are currently in specialty training and are expected to provide a full complement by the spring of 2023, said Irwin.

In addition, the doctor and one ICU nurse will also provide a critical care outreach team at Lions Gate, who will assess patients who may need extra support. The team, launched in July, has been providing that extra oversight 12 hours a day, and this week switched to 24-hour coverage, said Irwin.