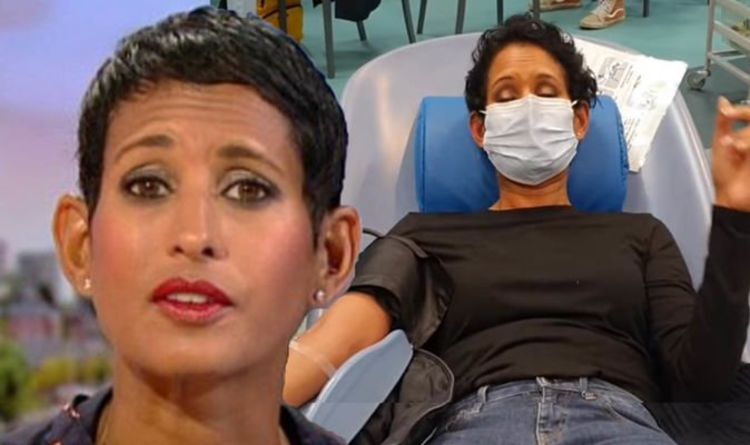 Naga Munchetty, 46, has been dubbed the “superstar” by social media users for her latest Instagram post. The BBC breakfast host posted a video donating blood while shaking with fear.

In view of her 51,500 Instagram followers, Naga posted the video in which she can be seen very nervous.

“I am now with my dear friend Russ, who has now got used to my thin veins and makes it absolutely pain-free.

“I’ll be on my feet with my day after that. So you only know, if you want to donate blood, you are doing a great thing. “

Naga added, “I’m done. If you can donate blood, if you want to donate blood, you’re doing a good thing. Anyway, see you at the BBC breakfast.”

She subtitled the video: “Just did this @givebloodnhs with one of my favorite bloodsuckers @willflanders.

Social media users used the comments to congratulate the BBC breakfast host on doing her part for the NHS.

“I get 14-day antibody replacement therapy infusions because I can’t produce my own antibodies.

“Ultimately, the IVs keep me in class, which is my passion. Always so grateful for anyone who takes the time to donate blood. Xx.”

Naga revealed on her radio show on Tuesday that she would not get involved in a New Year trend.

The BBC broadcaster spoke about people who tried skateboarding when she admitted she was too worried about injuries.

Naga will be hosting a morning newscast on BBC Radio 5 Live Monday through Wednesday from 11 a.m. to 1 p.m.

She said, “You know, we talked about New Year’s resolutions, we always do that at this time of the year.

Naga continued, “Have you tried or are you like me and you think ‘no way’.

“I’m ready to look ridiculous and try new things at times. But all I know is that it would be a recipe for disaster, so I would really worry about getting hurt.”