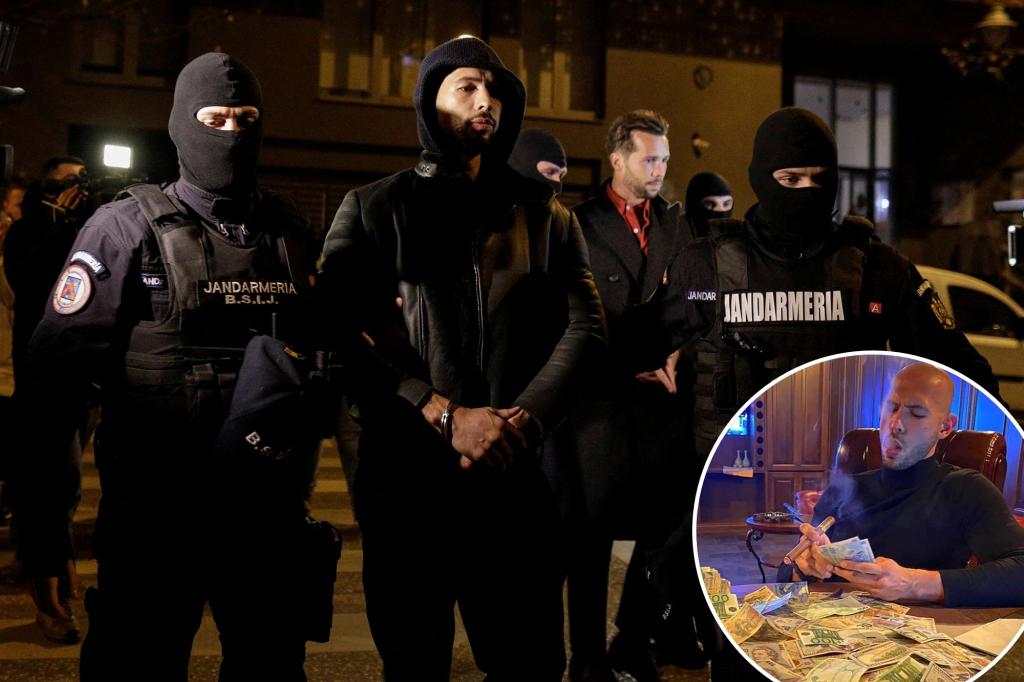 He claims his prison cell is being “bugged.”

Controversial influencer Andrew Tate, who is currently jailed in Romania over sex-trafficking allegations, is complaining that his prison cell is squalid, dark and infested with cockroaches and lice.

The imprisoned ex-kickboxer aired his complaints in an email to fans after a Romanian court recently ruled that he would remain in custody for another month, Jam Press reported.

In the message to his website subscribers — entitled “My first email from imprisonment” — the British-American businessman wrote, “They are trying to break me. Thrown inside a cell without light.”

“Cockroaches, lice, and bed bugs are my only friends at night,” lamented Tate, 36, who boasts over 4.7 million followers on Twitter but has been banned from multiple social media platforms over expressing alleged hate speech and misogynistic views.

Despite the allegedly abhorrent conditions of his cell, Tate maintains that he’s a model prisoner.

“When the guards bring me to and from the courtroom, I stay absolutely respectful,” the ex-fighter claimed, adding that the guards know he’s “innocent” despite the powers that be trying to “pour hatred into my heart.”

Tate and his brother Tristan, 34, were arrested alongside two Romanian women in Bucharest on Dec. 29 on allegations of rape and participating in a criminal ring that exploited women to create pornographic material.

That same day on Tate’s property, police raids yielded stacks of money, designer watches and even weapons, including guns, a hatchet and swords. Meanwhile, on Jan. 14, investigators were seen towing the Tate brothers’ fleet of luxury supercars from their villa on the outskirts of town.

While the siblings were originally only detained for a month, Romanian judges ruled that the pair would remain in custody through Feb. 27.

As formal charges have not been filed, neither Andrew nor Tristan has entered plea deals — although they unsuccessfully appealed their detention last week.

Tate’s defense attorney Constantin Ioan Gliga has since ripped the ruling as “unjustified and totally exaggerated,” claiming that they were being punished for their opinions rather than “what they actually did in their private lives.”

Meanwhile, Tate’s head of security, Bogdan Stancu, previously called the influencer’s accusers “stupid” for believing they would be “his next wife.”

Tate, meanwhile, has continued to claim he’s innocent. “I’m in detention as they ‘look’ for evidence,” claimed the disgraced social media star in a Thursday Twitter post. “Evidence they will never find because we are not guilty.”

He added, “They have and will continue to ignore and throw away any and all testimony or hard evidence we are innocent.”

“My case is not about the truth. This is about Politics.”