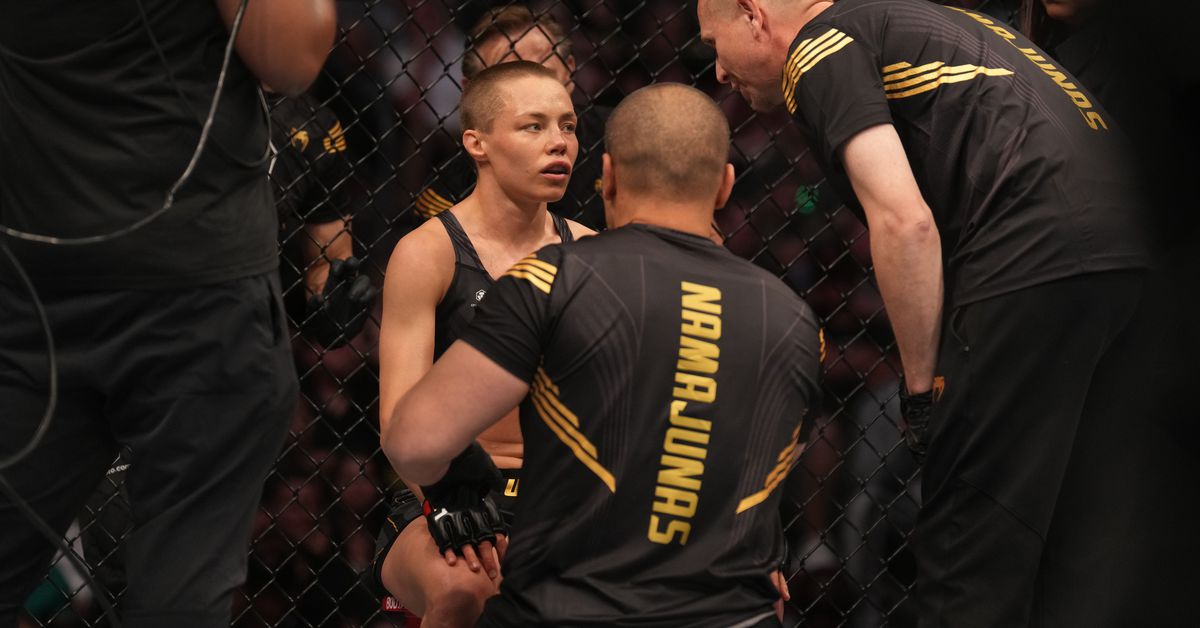 Among all the good and exciting action that came out of UFC 274, there was unfortunately some all-time level bad, as well.

This past Saturday night’s co-main event saw an eight-year score be settled. … Well, kind of. As the strawweight title rematch between Rose Namajunas and Carla Esparza slowly unraveled in round one, it became apparent that those in attendance and watching at home may be in for an excruciatingly lengthy 25 minutes.

Ultimately, Esparza once again bested Namajunas by taking home the title via split decision, thus becoming only the second two-time female UFC champion in promotional history alongside the woman she defeated. There just wasn’t too much action throughout the bout that saw a combined total of 68 strikes landed, and because of that, the blame has been placed on each. For former UFC middleweight titleholder Michael Bisping, he sees the now former champion, Namajunas as the one who dropped the ball hardest.

“Rose Namajunas absolutely s*** the bed is what happened there, I mean my god,” Bisping said on his Believe You Me podcast. “We can talk about that real quick. I like Rose, I don’t want to s*** on Rose, I’m a massive fan of her, I like the way she carries herself, I like everything about her, particularly her fighting style. But, Saturday night, she s*** the bed.

“It’s a high-pressure situation, I get it, you’re champion of the world. That brings a lot of pressure, we’ve seen other champions kind of change their style. Georges St-Pierre would be a classic example because of the pressure of being the champ. You have all this extra money, you have the fame, you have the recognition, you have a lot of perks that come with being the champion of the world. You want to maintain, you want to hang on to that. Therefore, she was playing it a little bit too cautious.”

Namajunas and Esparza first met in Dec. 2014 in the finals of The Ultimate Fighter 20 to decide the inaugural 115-pound champion and kick off the weight class. Historically, Esparza’s was one of the very best wrestlers to ever compete in the division and that talent has earned her the majority of her 20 career victories. On that first night against a green 2-1 Namajunas, it was no different.

Esparza scored a third-round rear-naked choke submission against “Thug,” pummeling her on the ground up until that finishing sequence. In the rematch, Namajunas did her absolute best to prevent history from repeating itself in that same manner.

“[Her fear of the takedown was] stupid because when she was taken down, she bounced back up straight away,” Bisping said. “She was never held, there was never any control time.

“Listen, I get it. I do. I’ve been there. You’re fighting someone that’s beaten you, that brings a lot of demons, a lot of psychological demons and skeletons in your closet and what not. You think, ‘Ah, s***. This woman’s gonna take me down and choke me out again, I better be careful.’ So you do play it carefully and you play it cautiously, you’re waiting for openings and you’re downloading data, making reads, whatever you want to call it. But at some point, you’ve got to say, ‘Alright, I’m here to fight. Now I’m going to have to take some chances.’ You know?

“Carla was the winner of the fight and I agreed although there wasn’t much of a fight,” he concluded. “The little bit of action we did see came from Carla initiating that.”

Justice. Mike Tyson will not face charges after repeatedly punching passenger on plane.

Return. Nate Diaz ready to finish his UFC career with a fight against Michael Chandler.

prediction. Joanna Jedrzejcyzk criticizes Carla Esparza after UFC 274, promises she is ‘soon to be champ’ again.

Have You Seen These Michael Venom Page Highlights?

Heck of a Morning. MMA Fighting’s Mike Heck discusses who Charles Oliveira will fight for the vacant lightweight title after being stripped at UFC 274.

Just for the record, I like to break records and I want to break another one… Fighting twice in same night. I can knock Conor out, and make Dias tap.

What do you think @danawhite?

@CharlesDoBronxs it’s funny you calling out Nate who hasn’t won a fight in years and same time saying I have to earn something…just say it straight that you scared to lose., your jiu jitsu won’t work in our fight and you know that https://t.co/3YZjcuvugX

Shut up Islam. The only guys scare to lose here it’s you. You got exposed on that fight week by bluff and not taking the fight. https://t.co/HXCkTuJl2B

I was there for you twice too, don’t play this game. You pulled out on fight week once I called your bluff once https://t.co/STot9syt7l

Are you casuals pissed you can’t comment on my tweets anymore?

Khabib is impressed by their performances.

If Islam gets the Charles fight he’ll be actively looking for the takedown and won’t be nervous to hit the ground , all of Charles recent opponents played the standup game with him, Islam also has the best defensive stats on his feet.. that fight would be amazing

I love it when people say

“yeah I would have been a fighter, but I was/am too old to start, have weak knees/wrists/back, didn’t have a good gym to train at”, etc…
Like damn bro sounds like you quit before you even started soooo

You probably wouldn’t have made a good fighter

Fighting in my home state means so much to me. Fighting right down the road where this UFC opportunity presented itself.. want to fight in every major city in Texas #ufc

Generally how it goes.

Who should get the next UFC strawweight title shot?