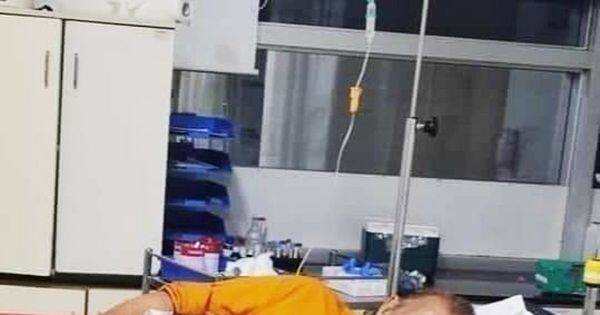 A picture of veteran actor Mithun Chakraborty lying on hospital bed has surfaced online and it has left his fans worried about his health condition. The image shows the actor sleeping on his left side with his hand tucked under his head. His other hand is seen covered in saline bandages. As the picture started going viral on social media, Mithun’s son Mahaakshay Chakraborty aka Mimoh has now shared an update on his father’s health condition. Also Read – After The Kashmir Files success, Vivek Agnihotri reveals title of his next film and it will leave you curious

According to a report in India Today, Mithun was recently rushed to a private hospital in Bengaluru after he complained of severe stomach ache and fever. Mimoh revealed that Mithun was admitted to the hospital because of kidney stones. He is discharged from the hospital now and he is fit and fine. Also Read – Hunarbaaz: Desh Ki Shaan: THIS Naagin actress replaces new mom Bharti Singh as the host

BJP candidate Dr Anupam Hazra tweeted the photo of Mithun and wrote, “Get well soon Mithun Da (I wish you a speedy recovery Mithun Da).” However, many people pointed out that this picture of Mithun is old and the actor is doing well at home and there’s nothing to worry. Also Read – Trending OTT News Today: The Kashmir Files digital release, Radhe Shyam digital release, Payal Rohatgi’s ‘black magic’ confession and more

Mithun was last seen on Hunarbaaz as a judge alongside Parineeti Chopra and Karan Johar. He recently made his OTT debut with a psychological thriller series Bestseller. It also stars Shruti Haasan, Arjan Bajwa, Gauahar Khan, Satyajeet Dubey and Sonalee Kulkarni. He was also seen in director Vivek Agnihotri’s The Kashmir Files, which went on collect an unprecedented Rs 250 crore worldwide.