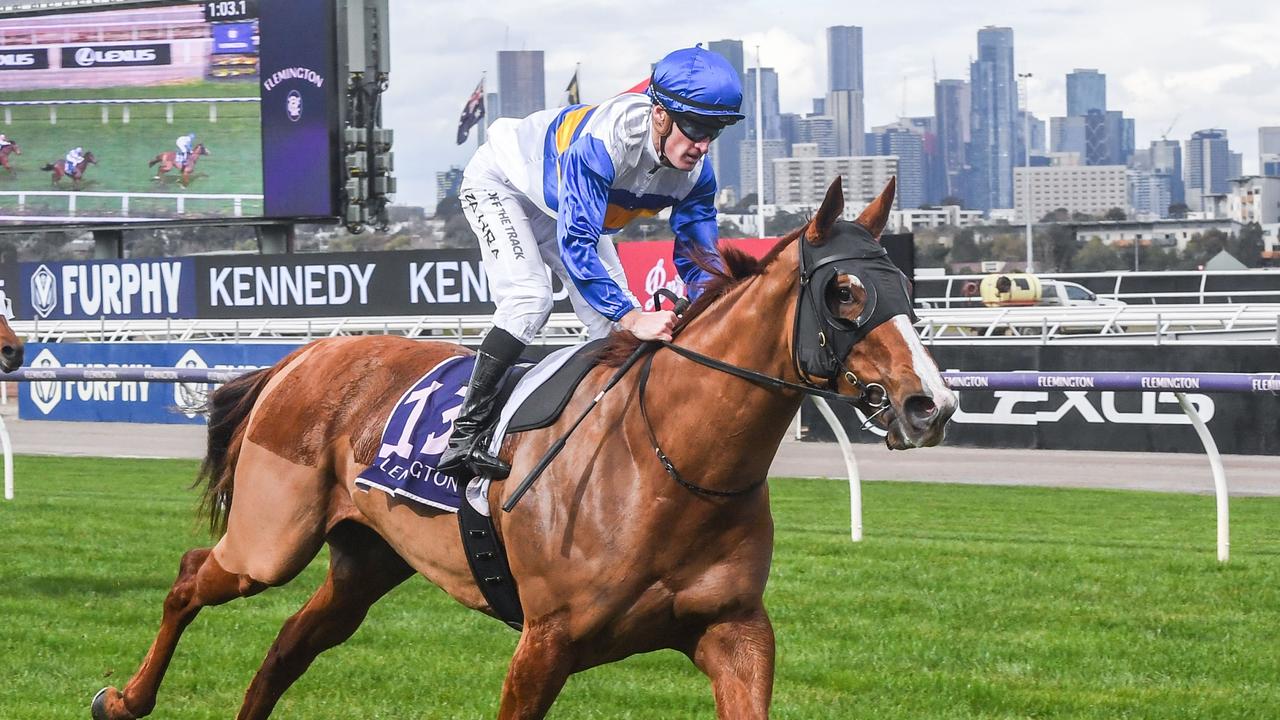 Walker was flown to The Alfred hospital after suffering a head injury in a fall at Tuesday’s Pakenham jumpouts.

Walker was placed in an induced coma as doctors assessed his condition but the rider known as “The Cuz” improved over the ensuing days.

The mare is in for a great preparation. pic.twitter.com/6s2T2cd1EN

Walker was well enough to ring Cranbourne trainer Cindy Alderson with some advice for stand-in jockey Mark Zahra on Veranskova.

“It was great to hear his voice actually,” Alderson said of Walker’s early morning call.

“He actually rang me back and said ‘make sure’.

“He’s done a lot of work on this mare.

“He’s tried her and it was really disappointing that he couldn’t ride her.”

Drawing barrier two threatened to derail Veranskova’s chances in the straight-track sprint but Zahra negotiated a course to have the mare in the perfect position on the outside section of the track at the 300m.

Veranskova did the rest, racing away to score a soft win over Sixbysixtythree ($7.50) and Screwed Down ($11).

“Big shout out to the cuz,” Zahra said.

“I was there with him on the track on Tuesday. It was pretty bad to see.

“It was good to hear he rang Cindy this morning and said it would just win and not to ‘F’ up.

MOTT AND LYRICAL LAD ON SONG

Jockey Jamie Mott continued his impressive start to the season when he piloted Lyrical Lad to another Flemington success.

Mott’s win on Lyrical Lad was his sixth in the first week of the 2022/23 season while he posted his fourth win on the Phillip Stokes-trained galloper in The Parade Lounge (1620m).

While Lyrical Lad won well in Benchmark 84 level, Mott said the gelding could make the grade in harder races.

“When he races like he did today, when he’s on song, he can definitely get to 100 rating,” Mott said.

“He still hasn’t put a foot wrong. Who knows? He could be better than that.

“Hopefully he runs in a race next time where he gets my weight range.” ANOTHER DOUBLE FOR WILLIAMS

Williams also rode a double at The Valley last Saturday before getting the odds on favorite Berkeley Square home earlier in the Flemington meeting.

Williams got the best out of the Mark and Levi Kavanagh-trained Horrifying to win The Rose Room (2530m) narrowly over the Maher and Eustace-trained Through Irish Eyes.

Horrifying defeated Through Irish Eyes when the pair met at Flemington on July 16 before repeating the effort on Saturday.

“It is amazing what confidence does to horses, and people, but my fellow was really relishing Flemington at this part of his preparation,” Williams said.