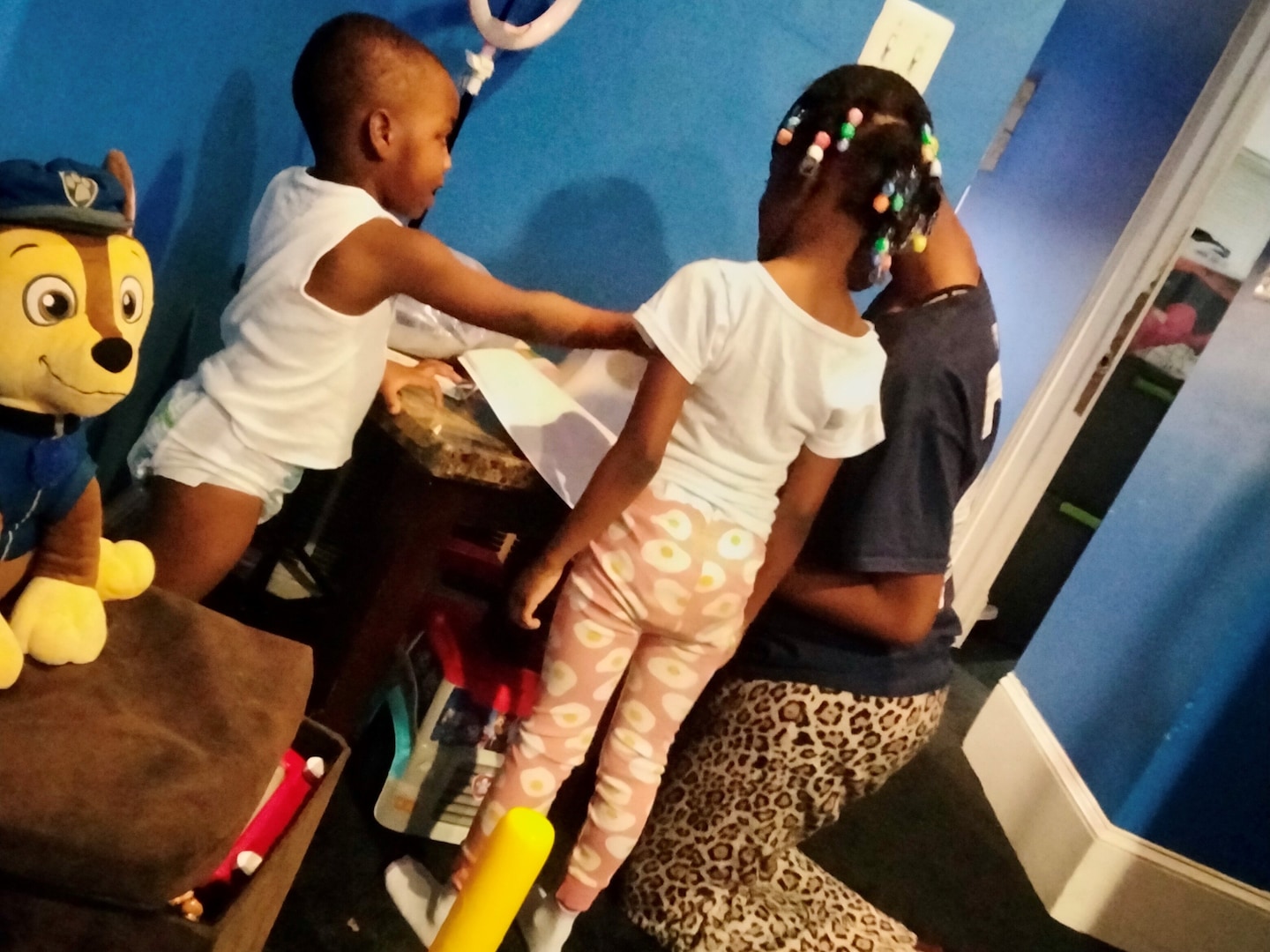 The email Eboni Harris sent on Christmas Day started pleasantly enough, considering what she had found in the kitchen of her apartment in Northeast Washington: a rodent on her family’s meal.

“Good evening, hope you are enjoying your Christmas Holiday,” the single mother of three began her email to an employee of the agency that owns the building where she lives in a one-bedroom unit. “I hate to be a bother,” Harris wrote before explaining that she had cooked Christmas dinner, left the food covered on the stove and, after walking away for a moment to throw an item in the trash, returned to find a mouse sitting on here food.

“I’m very upset and it is very disturbing to me at this point,” she wrote. “I can’t take it anymore at this point. It’s just mice infested. I’m tired of it.”

Harris sent that email at the end of 2020. At the time, her son was still an infant and her daughters were 2 and 13.

Since then, Harris says, she has seen more mice in her home, sent more emails and watched her children, who are now 2, 4 and 15, grow more fearful. She describes with horror the morning she went to wake her children up for school, pulled back their covers and watched a mouse scurry out of the bed.

“That made me jump and scream,” she recalled on a recent morning. “My children don’t even want me to turn the light off once they get in bed. They’re afraid.”

In a metropolitan area where construction is constantly bringing new buildings, ones that often come with high rents, Harris’s situation shows what it looks like to be stuck depending on the city for housing. She can’t afford to move on her own. She can’t force officials to give her rental assistance in a different building. And she can’t accept that her children will just have to get used to knowing they might wake up with mice in their beds.

Harris said she has grown so frustrated with her family’s situation she has considered becoming homeless to get the city to help her find adequate housing.

“I need out,” she said. “I’ve been told we can’t help you because you’re not homeless. Do I become homeless?”

Under Mayor Muriel E. Bowser (D), the District has made notable improvements when it comes to housing homeless families. Gone is the run-down DC General shelter where many families lived, including the family of 8-year-old Relisha Rudd, who was taken by a janitor at the shelter and hasn’t been seen in the years since. Smaller, newer shelters now exist across the city.

Two girls went missing from the same DC shelter 8 years ago. One came back. The other was Relisha Rudd.

But in that space between homeless and comfortably housed are the many families who receive rental assistance through the city. For those families, many of whom are Black and have deep roots in the region, that rental assistance is the only way they can afford to remain in a city where rents have gone from high to higher. Long before the pandemic began, gentrification was pricing low-income residents out of many neighborhoods, and in the past year, rents have become even more steep. WTOP recently ran an article under the headline, “Rents rise dramatically across DC.” The article cited a report by rent.com that found that in the past year, the average cost of studio apartments in the city went up by 23 percent and the average cost of apartments with one or two bedrooms rose by 15 percent.

What children in those families — which have need but aren’t among the neediest in the city — experience often goes unseen. But concern for Harris’s children has been keeping one community activist up at night.

I learned about the family’s situation from social justice advocate Tiffany Aziz, who has been spending her own time trying to help the family navigate through a web of city officials and agencies to get new housing. Harris’s 2-year-old son has developed asthma, and her 15-year-old daughter has been getting medical help for depression. Harris and Aziz say both conditions have been exacerbated by the mice and an apartment that is too small for the family’s size.

Harris is one of the city’s many gun violence survivors. A police report describes her as shot in April 2019. She said she was pregnant with her youngest child at the time and bullets not meant for her struck her as she sat in a car in Southeast Washington. One bullet broke her arm and another hit her in the back, she said, but the baby was unharmed, thankfully. Afterwards, she couldn’t take care of herself or her children on her own, so she moved in with a relative temporarily before returning to the one-bedroom apartment where the family now lives.

Aziz and Harris shared with me photos and videos that show live and dead mice in the apartment and evidence of possibly another creature in the building. In one video, a loud scratching sound can be heard coming from the ceiling. Harris said the sound can only be heard at night, which makes her suspect it’s a raccoon or some other nocturnal animal.

The two also shared with me numerous emails they have written to city officials and employees of the DC Housing Authority (DCHA), which provides the family’s subsidy, and the United Planning Organization (UPO), an agency that serves the city’s low-income residents and owns the building where the family lives. Those correspondences show Harris has repeatedly expressed her desperation.

“I shouldn’t have to up and leave a place and become homeless in order to receive help to get into a shelter program,” she wrote in an email in January to more than a half-dozen officials. “I can’t just go homeless with three children that’s just not adequate at this time. I feel that something should be done immediately. They always say that [there’s] fair housing out here for low income people and I don’t see that happening at this time for my three children.”

When asked about Harris’s situation, DCHA spokesperson Christy Goodman provided a statement that said the agency “does not comment on specific customer inquiries” but that addressed how it handles these situations in general. The DCHA contacts both the landlord and the resident to conduct inspections.

Josephine Boukhira of the UPO said in a statement that Harris has lived in the one-bedroom unit for 13 years and that the agency is “committed to supporting Ms. Harris” and “this is not a case where a tenant’s concerns have been ignored by the housing provider.”

The statement describes the UPO as painting the apartment, renovating a bathroom and taking “immediate action” in 2021 after receiving notice of concerns about rodents. “We engaged a pest control company that provided regular treatment and recommendations to resolve the issue,” the statement reads. “We engaged a contractor to seal any cracks in the property that might be allowing the pests to enter Ms. Harris’s ground floor unit. … In 2022, UPO contracted with a second pest control company to continue ongoing treatments.”

Boukhira said the UPO also, at the suggestion of the DCHA, contacted on Harris’s behalf a list of agencies that provide subsidized housing in the city. In December, they identified a unit that was available but then discovered Harris didn’t qualify because the city had not provided her with the necessary voucher. (Harris and Aziz have requested the city provide a voucher).

Harris confirmed that pest control workers have come to her home, but she said that the mice have continued to return. One of the emails she and Aziz shared contains a statement from a woman who identifies herself as an upstairs neighbor of Harris’s.

A rodent experiment with a choice: Eviction or death?

“The mice infestation is so terrible and I am terrified of mice and rats to the point where I [feel] like I’m about to faint if I see one’” it reads. “I have to stomp and clap before I enter my kitchen every time I want to enter it because I have been surprised several times with them on my stove and counter.”

Harris and Aziz said they had hoped to resolve the issue privately but decided to speak publicly about the situation after growing worried that the family would not receive the help it needs to move. Harris said her teenage daughter keeps asking her, “Mommy, when are we leaving?”

“I’ve cried a lot about this situation,” Harris said. “I’ve wanted to give up. I remember texting Ms. Tiffany saying, ‘Never mind, it is what it is.'”

“Please don’t give up,” Aziz told her.

“I’m just feeling hopeless,” Harris said. “Just feeling stuck. I know this is not just it. This is not the last stop for us. It can’t be it.”