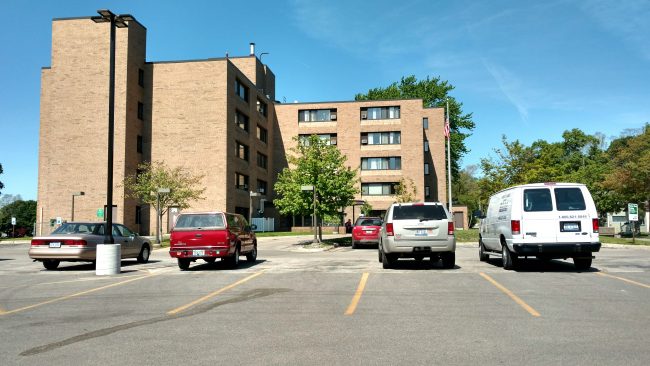 MANISTEE — Bed bugs have been a persistent problem at the Century Terrace apartment complex in Manistee,

A report was written by Griffin Pest Solutions, Inc., a company that contracts with the Manistee Housing Commission. It tracks times sprayed at certain units, times when units could not be entered because of COVID-19 or other health issues and events at Century Terrace from January 2021 to July 2022.

The report was presented to the Manistee Housing Commission at its July meeting by the commission’s executive director, Clinton McKinven-Copus.

Despite the report only dating back to January 2021, the problem has existed longer than that, McKinven-Copus said in a separate interview.

A replay of the July housing commission meeting can be seen online along with this article at manisteenews.com

“Well, we have been dealing with pest management and bedbugs since 2015. And we have maintained unit logs ever since we got professional providers to take care of it,” McKinven-Copus said.

He notes that since the housing commission hired professionals for pest management, Griffin Pest Solutions has kept meticulous records that are then sent to McKinven-Copus.

“We have a history that tells us what treatment was provided in what unit. It doesn’t go by resident names, only by a unit.. And so we know over all those years what treatments are received, if there were infestations, what they were… we track all that and we have copies of the service reports provided to us by Griffin pest management,” McKinven-Copus said.

The Manistee Housing Commission is responsible for overseeing senior and low-income housing in the city. It also has an oversight of the properties owned by the commission.

Unlike other local units of government, the housing commission is funded federally by the US Department of Housing and Urban Development, and the executive director has accountability to the federal government.

Harborview Apartments and Century Terrace are apartment complexes that serve tenants who are classified as low income, and are managed by the Manistee Housing Commission.

He said that there are two types of treatments that Griffin Pest Solutions uses for pest management: heat and chemical, based on messenger ribonucleic acid.

The housing commission has a contract with Griffin Pest Solutions for every unit in Century Terrace and Harborview to receive a basic treatment for bed bugs and other pests four times a year, McKinven-Copus explained.

There are 119 apartment units at Century Terrace and 48 at Harborview.

During the July 26 Manistee Housing Commission meeting, McKinven-Copus said that the problem got so bad last in August of last year that “we had dogs come through and they sniff out every single unit and every single area in the common area that had bed bugs. Those (units) were treated with a higher dose of the mRNA treatment.”

He said that the units were then re-inspected after 30 days and then another bed bug treatment was laid down at all Century Terrace units and all common areas at the complex.

After the treatment, there were no bed bugs. Unfortunately, the relief didn’t last long.

“Well, I guess we didn’t have a problem for about a month or so and then they started cropping up,” McKinven-Copus said.

What are bed bugs?

According to michigan.gov, “bed bugs are small, flat insects that feed on the blood of people and animals when they sleep,” the state website read. “Bed bugs are experts at hiding. Their slim flat bodies allow them to fit into the smallest of spaces and stay there for long periods of time, even without a blood meal. Bed bugs are usually transported from place to place as people travel.”

The state website also lists some signs of bed bugs.

“Many people will react to bed bug bites with an itchy welt, similar to a mosquito bite. However, bite reactions can vary from person to person, and some people do not react at all. Fortunately, bed bug bites have not been found to spread any diseases,” the website reads.

“Other signs of a bed bug problem can include: finding small wingless bugs in cracks and crevices around the bed, seeing small blood spots or bed bug fecal matter on bedding, or finding bed bug eggs and/or cast skins. Not all bugs that you find in your bedroom are bed bugs — if you find a bug that you suspect is a bed bug, you should save it to show to an expert.”

“There’s two major prongs in maintaining a low rate of bed bug infestation. One is a strong pest management, which we have and have had in place for many years,” McKinven-Copus stated. “The second is the participation of those living in apartments to keep their apartments clean. Bedbugs and pests love clutter — and particularly they love cardboard and magazines and newspapers. Most pests, and particularly bed bugs can lay dormant for multiple years.”

McKinven-Copus stated that it is ultimately the landlord’s responsibility for bed bug treatment, according to Michigan laws on health and safety. He also noted that tenants cannot be held at fault.

However, he said that one resident had a bed bug problem but had failed to notify management until the problem became very severe. That same resident also refused Griffin entry to treat for bed bugs.

He said that while the housing commission has the right to take action to the point of filing an eviction order, it cannot take action without a judge’s approval.

He noted that not being able to evict the resident could cause problems for the community at large.

“It’s a hazard to the entire community because they ride down the bus, they go to Meijer, they go to Family Fare … and if they refuse treatment, who knows what they’re carrying with them,” McKinven-Copus said.

Karen Goodman, a member of the housing commission board, also noted that many residents in the complex are seniors and have disabilities, and some may not have the ability to fully comprehend the seriousness of the issue. McKinven-Copus contended that was not the issue with the resident in question.

However, Goodman also pointed out that the problem with bed bugs goes beyond Century Terrace, the housing commission and is a countywide problem that is not easy to fix.

“It is all over our community, in several places, not just (in Century Terrace). … Sometimes as an employer, you have to get concerned about people coming (into your place of) employment,” Goodman said.

McKinven-Copus said the housing commission is still addressing the problem. The next steps will take place this week, he said.

“This Friday, we are bringing in canines to do a full 100% check at Century Terrace,” McKinven-Copus stated. “Immediately following the canines, we will have any units that are tagged with canines as being infested with bed bugs will be divided into two categories: high infestation or low to medium infestation.

“As soon as we can after the canine inspection is completed, we’ll begin heat treatments and we’ll begin chemical treatments. We have Griffin pest management lined up to begin doing that right away for us. And we will do that and go through the units until they’re done.”