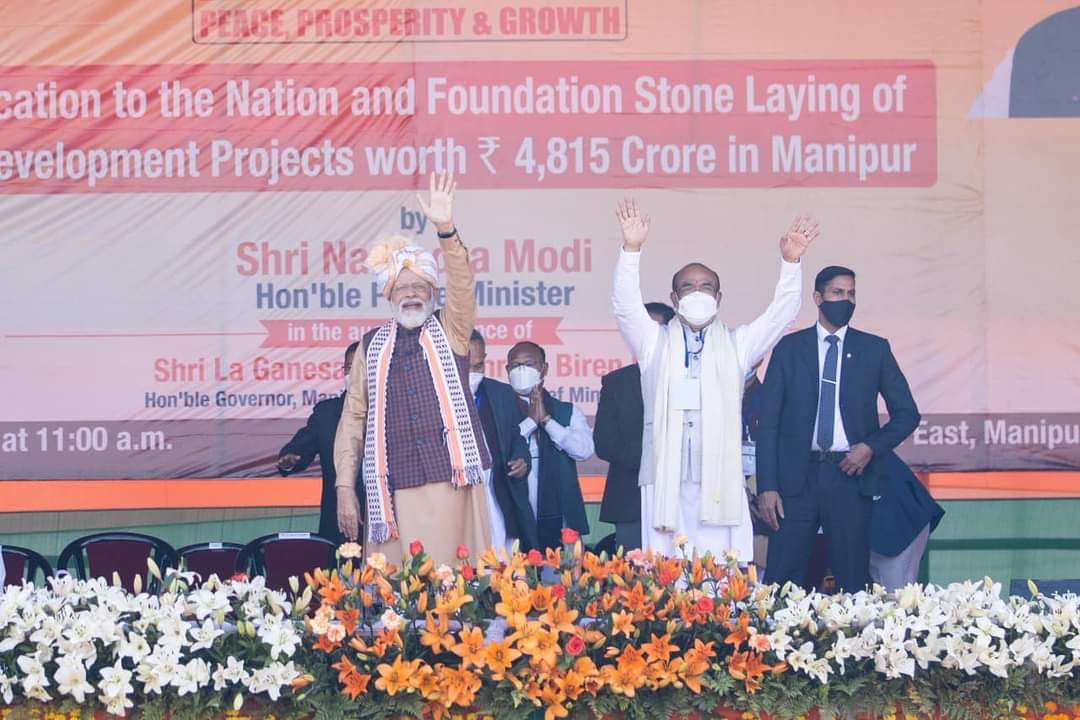 Imphal: Prime Minister Narendra Modi Inaugurated on Tuesday in Hapta Kangjeibung in Manipur’s capital Imphal and laid the foundation for a variety of development projects worth Rs 4,815 crore.

The development projects cover various sectors, including a 150-bed cancer hospital at the Jawaharlal Nehru Institute of Medical Sciences (JNIMS) in Imphal East District. This state-of-the-art cancer hospital is being built for Rs 160 crore on a public-private partnership (PPP) basis.

“This cancer hospital will greatly benefit the state’s citizens by reducing the expenses that would otherwise have to leave the state to access cancer-related diagnosis and treatment services,” said a statement from the PMO.

PM Modi also laid the foundation stone for five construction projects for the National Highway with an investment of 1.746 billion rupees over a distance of 111 km. These roads will provide connectivity to people in the state regardless of the weather and make it socially and economically strong.

The Prime Minister also laid the groundwork for the construction of the Manipur Institute of Performing Arts in Gurgaon, which will promote the state’s rich arts and culture and showcase its rich cultural diversity and heritage.

With the aim of strengthening the information technology sector in the country, the Prime Minister laid the foundation stone for the establishment of the Center for Invention, Innovation, Incubation and Education (CIIIT). The project is the largest PPP initiative in the country.

In addition, the foundation stones were laid for 72 projects under Pradhan Mantri Jan Vikas Karyakram (PMJVK), which will provide the urgently needed infrastructural support in the health and education sector for the holistic development of the minorities. PMJVK aims to provide better socio-economic infrastructure to minority communities, particularly in the areas of education, health and skills development, which would further narrow the gap between the national average and minority communities, it said.

Meanwhile, one of the 13 projects that PM Modi inaugurated during his visit to Manipur is a COVID-19 hospital with 200 beds in Kiyamgei. The hospital was built in partnership with the Defense Research and Development Organization (DRDO) for Rs 37 billion to improve health care in the state.

To further improve the seamless year-round connection from Imphal to Silchar and to ensure smooth traffic in heavy traffic, the Prime Minister also inaugurated a steel bridge over the Barak River on the NH-37, which was built at a cost of over 75 rupees crore.

These three projects under the Imphal Smart City Mission are being developed at a cost of over 170 billion rupees.