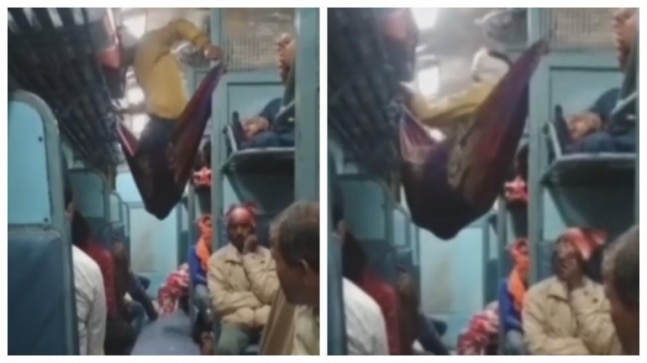 The viral video shows a man stepping on the ceiling seat in the train compartment. A man sits comfortably on a ceiling seat in a train compartment.

During a vacation or simply on a business trip, most of us have been afraid that our train tickets will not be confirmed at the last minute. Even if the ticket qualifies for Reservation Against Cancellation (RAC), you have to put up with another passenger in the narrow bunks, which is nothing short of a nightmare. However, a man’s video is now going viral because it offers a solution to not getting a confirmed seat on a train. You may have experienced this scene before, but trust us, it will make you giggle unconditionally.

The video shared on Instagram shows the inside of a train compartment. In the middle of the corridor is a blanket attached at two ends. As the clip continues, a man steps on the hammock like a blanket and makes himself comfortable. Checkmate train reservation systems!

The clip has been viewed over 73,000 times and has received multiple reactions from internet users. While some indicated that this type of Jugaad is extremely convenient and they tried it out, others shared simple laughing emoticons in the comment section. Would you try this Jugaad the next time you don’t get a confirmed ticket?