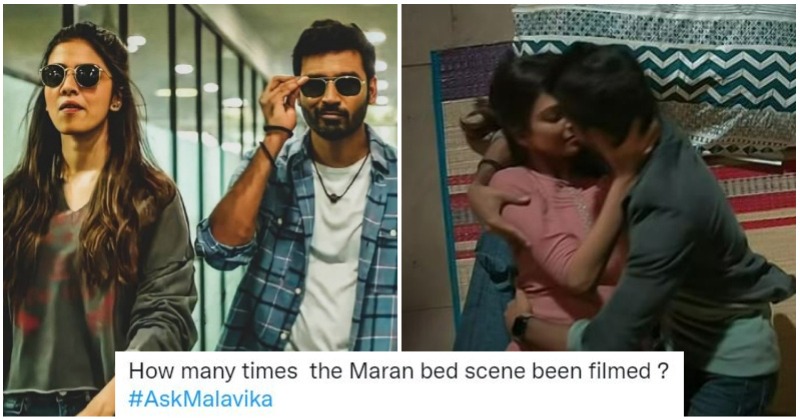 Malavika Mohanan, who made her acting debut with the Malayalam film Pattam Pole in 2013, is a popular name down south. Daughter of cinematographer KU Mohanan, the actress has also featured in various Tamil, Kannada, and Hindi films.

She was last seen opposite Dhanush in Maaran (Tamil) which premiered on Disney+Hotstar, earlier this year. While the film’s storyline fetched a mixed response from moviegoers, Dhanush and Malavika’s performances were appreciated.

the Beyond The Clouds actress owns a huge fan following on social media and often takes out time to interact with her well-wishers. Recently too, she conducted a Q&A session on Twitter and replied to many fans. It took an unexpected turn when a user asked about her ‘bed scene’ with Dhanush in maaran.

However, Malavika handled the situation correctly and gave it back savagely. During the Q&A session, a Twitterati asked how many times she shot for the intimate bed scene with maaran co-star Dhanush along with its screenshot. This obviously irked the actress, who in response said, “The inside of your head is a sad place indeed”.

The inside of your head is a sad place indeed

Well, netizens are praising Malavika for her strong reply. Reacting to her post, a Twitter user wrote, “What an answer”. Another user tweeted, “Best reply to that kind of abusers. Slipper shot”.

Here are a few reactions:

Best reply to that kind of abusers

Don’t reply to shit like him, he is just releasing his frustration

On the career front, Malavika currently has Ravi Udyawar’s Hindi film Yudhra in her kitty. It features Siddharth Chaturvedi as the male lead opposite her.