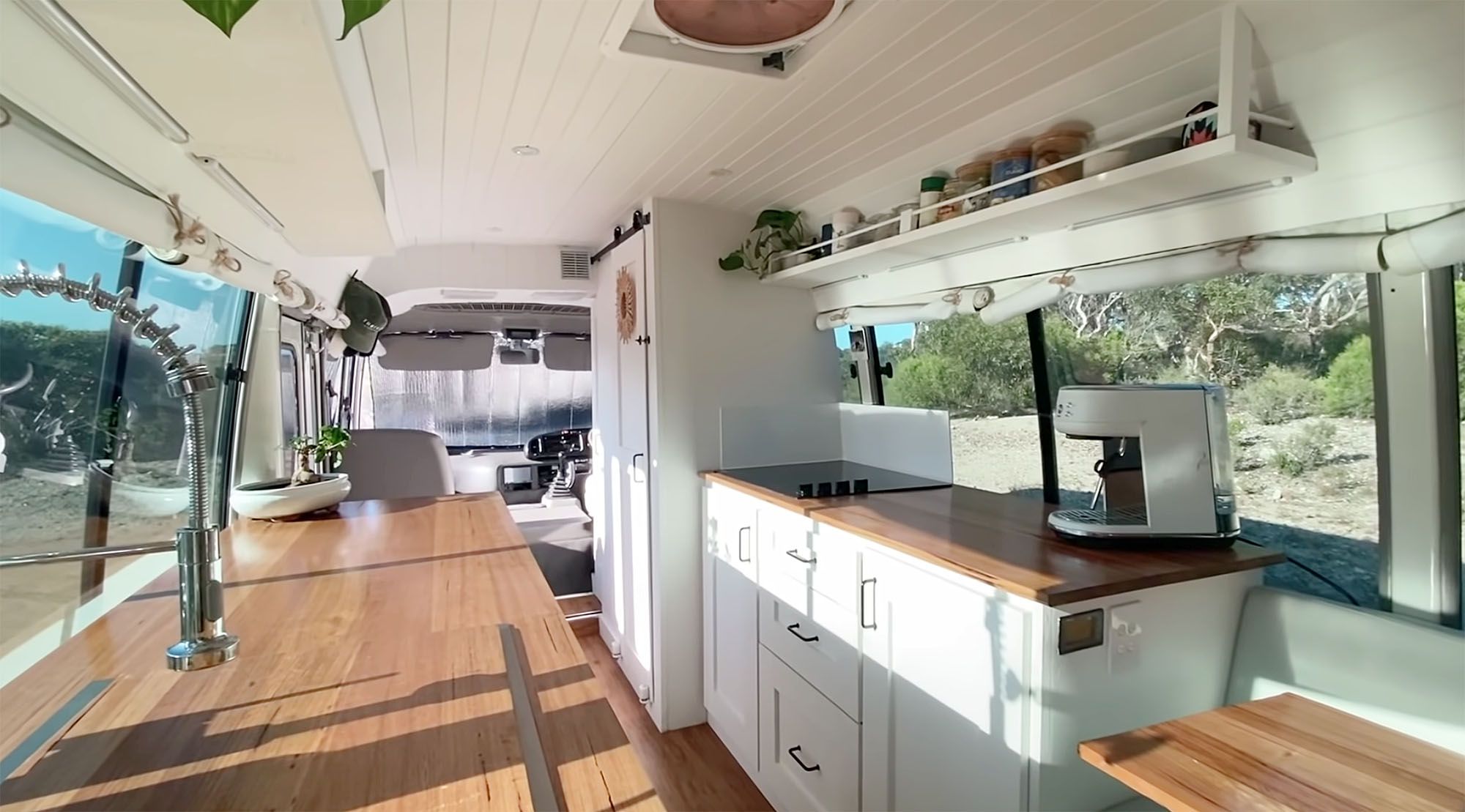 With technology facilitating the possibility of remote work and confronted with an increasingly expensive housing market, more and more people are thinking about living a more mobile lifestyle, typically in a converted vehicle like a bus or a van. But while bus conversions are often built out of old school buses—hence the term “skoolie”—there are other intriguing options too, like ambulances, shuttle buses, and the extra-long, articulated “bendy” buses. Suffice to say, there is a wide range of possibilities when it comes to reading an older vehicle into an energy-efficient tiny home-on-wheels, and the only limitation is one’s creativity.

In Australia, Elana Coundrelis and her partner converted a 2003 Toyota Coaster minibus into a light-filled mobile dwelling that is completely powered by solar energy. The couple got a helping hand in their conversion from Elana’s father, a mechanic who knew his way around this particular type of vehicle.

Working as a team, they managed to create an incredible living space that is outfitted with a shower, a large kitchen with all-electric appliances, a bed, and a multifunctional L-shaped couch. There are lots to like here, and we get a closer look at the lovely interior via Exploring Alternatives:

The bus’ interior is remarkably filled with natural sunlight, thanks to the abundance of windows. The bus used to be a transport vehicle for a charity and was rigged with a wheelchair lift that Elana’s father helped to remove for the conversion.

It’s slightly larger than a camper van, but smaller than a full-sized school bus, meaning it’s easier to park and maneuver. The exterior has been kept a white, nondescript color, while the roof has been equipped with a pair of residential-grade 305-watt solar panels, which power the entire bus.

Stepping inside, we come into the front where the driver’s area sits, as well as the closet and enclosed bathroom. The couple wanted to keep the rest of the bus’ windows as unobstructed as possible, so they decided to place the bathroom right at the front.

Behind its secured barn-style doors, we see that the bathroom is pretty simple, consisting of a Thetford compact RV toilet with an electric pump, a fan and light, and an RV-style shower head that has a pause button to save water.

For privacy and repelling water, two shower curtains are used, along with waterproof wall panels with a tiling pattern that has been adhered to the walls.

Past the bathroom, we enter the kitchen, where two counters on either side of the bus house all the elements that make it into a fully functional spot to cook meals.

There are hand-built cabinets and drawers painted white, where all the utensils and pots and pans are stored. The stove is a four-burner electric cooktop, and the mini-refrigerator under the counter was chosen as it had the largest freezer for its size.

Above, there is some open shelving to store spices. This conscious choice to not install bulkier cabinets up top means the space feels much more open. The windows are covered with canvas curtains that can be tied up.

The gray sink with its pull-down faucet is larger in size than typical RV sinks, making it easier to wash dishes—or even a newborn baby, as Elana jokes. It can be covered with a tightly fitting cutting board to create more counter space.

Beyond the kitchen is the lounge area, which features a wonderfully designed L-shaped (actually more of a U-shaped) couch with removable cushions that have storage integrated underneath it. This is where the couple stores miscellaneous items, and their batteries and water pump. A height-adjustable table mounted on an arm serves as a small dining table for two, or a worktable.

The double-sized bed sits right behind the sitting area and has some storage for books on an overhead open shelf above. As there is no air conditioning in this bus, there are a couple of wall-mounted fans here to keep the nights cool. The bed sits on top of a platform that can be raised on gas struts to access the winter clothing storage underneath.

Back outside and at the rear, we see that one can also access the bus’ garage via the rear and side doors. There is also this awesome slide-out component that has two compartments, and also serves as an outdoor cooking station.

Having built their dream bus home, the couple is now traveling around Australia’s fascinating landscapes and documenting their journey (and their bus build) on Elana’s YouTube channel and on Instagram.