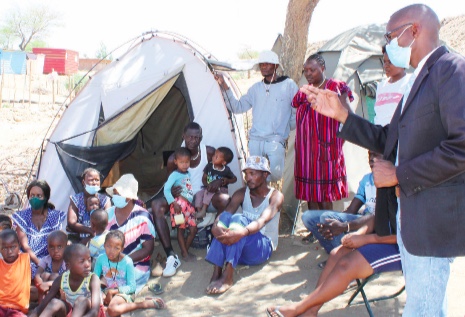 Thirty-two people, including schoolchildren, toddlers and a two-week-old baby, have been living in a river bed near a rubbish dump along Daan Viljoen Road in the Agstelaan area of ​​Otjomuise in Windhoek for seven months.

The group told The Namibian on Thursday that they have been living in tents by the river bed since April after being unable to occupy any land.

Renting has become unaffordable and they have resorted to the river bed with nowhere else to go, they said.

Maria Kaichab (29), who comes from Otjinene in the Omaheke region, claims to have moved to the capital in 2010 and lives with her partner Abel Kavari (31) and their four children in one of the tents.

Life got tougher when she lost her job as a domestic worker in 2018, she said.

“It is a daily struggle to find food and sometimes we go to bed on an empty stomach,” said Kaichab.

Kavari said he needed to take medication for his heart disease but found it difficult to take on an empty stomach.

Zenojambu Katjiteo, 25, mother of a two-week-old baby, said the situation sometimes causes a lot of stress, which leads to depression.

She said she didn’t have enough food for herself and her baby.

She said she was afraid of the rainy season as it would make conditions worse for her and her baby.

Some of the women said they were not safe in the river bed at night.

People throw stones at their tents at night and often fall prey to robbers when they fetch water.

The general secretary of the People’s Democratic Movement (PDM), Manuel Ngaringombe, said last week that this group of people is going through a serious humanitarian crisis.

“It is so bad that, 31 years after independence, we people are living in river beds and on rubbish dumps.

“Our goal is to expose the situation and challenge the government and our leaders because this is not how we should live,” he said.

He said the group needed makeshift housing as the landfill was unsanitary while permanent structures are being considered.

The food the PDM provided them with last week can only last two days, he said.

Also present were committee leaders Sylvester Kazapua and Rinaune Kandji, who represented the group at the food handover and the visit to the PDM.

Kandji said the Windhoek city councils and mayor should address the obstacles they face in assigning country people as the matter is long overdue.

The marginalized families consist mainly of San, Otavue and Ovatjimba.