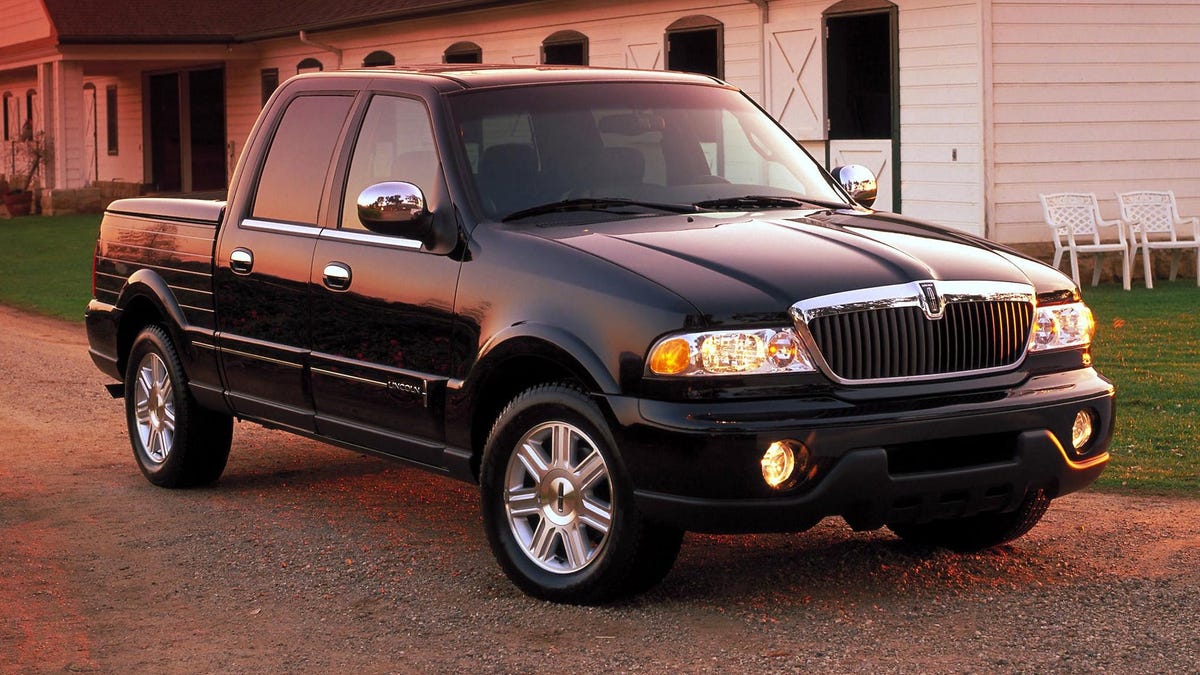 The early to mid-2000s were an odd time for American automakers. They were getting their groove back, tHey economy was booming people had the money for toys, aand toys with retro styling were all the rage. Not all of these toys were good ideas though. Questionable choices were made by automakers during this time. Take the Lincoln Blackwood for example.

Lincoln, understandably wanted in on the expensive toy game, and boy was the Blackwood a rich cowboy’s toy.

If you don’t know or have never heard of the Lincoln Blackwood, just picture a first-generation Navigator with a pinstriped, enclosed pickup bed out back. Or some kind of West Coast Customs chop job on an F-150 that had visions of grandeur (F-150 owners have been putting Navigator facias on F-150s for years, as it bolts right on). Mostly it was a Frankenstein of a vehicle, being a combination of an F-150 Supercrew (right down to its 5.4-liter Triton V8) and a Navigator.

Only sold for the 2002 model year, the Blackwood originally debuted as a concept at the 1999 North American International Auto Show. Ford had seen the new hotness that was the Cadillac Escalade EXT and wanted in on the game. The concept debuted to great fanfare, with Ford saying that it was commencing production in two years.

The showstopper for it was its unique bed. Covered in Black African wood with aluminum pinstripes on the outside, it had a hydraulically operated tonneau cover and two lower Dutch doors that were opened by the key fob The interior of the bed was lighted and lined with stainless steel.

The Blackwood came to market virtually unchanged from the concept save for one area: the bed. The African wood paneling, lighting, and metal floor rails the bed of the concept had been gone. Artificial wood paneling replaced the real wood, while inside of the bed it went full stainless steel with plush carpeting on the floor. It was all just a fancy complicated trunk manufactured by Magna Steyr for Ford, useless as a real truck bed. That bed was so complex that manufacturing issues lead to an initial delay in deliveries. But it didn’t matter in the long run, because the Blackwood was a flop.

The pointlessness of the bed was its real killer. The Escalade EXT was killing it because of the versatility of the midgate bed system. Ford didn’t seem to realize no one wanted a truck bed that was essentially a massive fancy trunk. Another nonstarter in the luxury truck segment, the Mark LT, replaced the Blackwood a few years later.

Ford projected 18,000 sales initially with 10,000 of those planned to be built its first year. But only 3,356 were ever sold, meaning it’s relatively rare for what it is. Its high MSRP of $52,200 (which translates to over $81,000 in 2022 dollars) and a bed that was borderline unusable were two nails in the coffin for it. But the bed wasn’t the only stupid feature it had.

Take a look at that navigation screen placement. Imagine it’s 2002. You’re on your way to work, talking on your Nokia, and you need to get around a traffic jam, but you’re juggling your coffee and phone while driving. All you gotta do is look down to get directions!

It’s easily one of the most ill-conceived design features you will likely ever see in a vehicle. The navigation unit in the Blackwood was its only option. For $2,000, you got a five-inch unit in a terrible position.

In a regular F150 SuperCrew, the space for this screen was empty with a few storage bins under the dash. You could put change, a phone, fries, or whatever else you could dream of in it. With this being the early 20000’s and vehicle interiors weren’t yet being designed around an infotainment screen, Ford did the best they could? I guess? I mean it most likely saved them money since implementing a nav screen into the cookie-cutter dash would have required a redesign. And no doubt this would have added to the price of the Blackwood in the process.

Some now say the Blackwood redeemed itself as being one of the trendsetters for the luxury truck market — a market that is now booming. And with under 4,000 sold in just 15 months, it may just well be a future classic. However, history judges the Blackwood, other its over-the-top useless bed and awesome nav screen placement remain two unfortunate quirks on this rolling toy no one asked for.