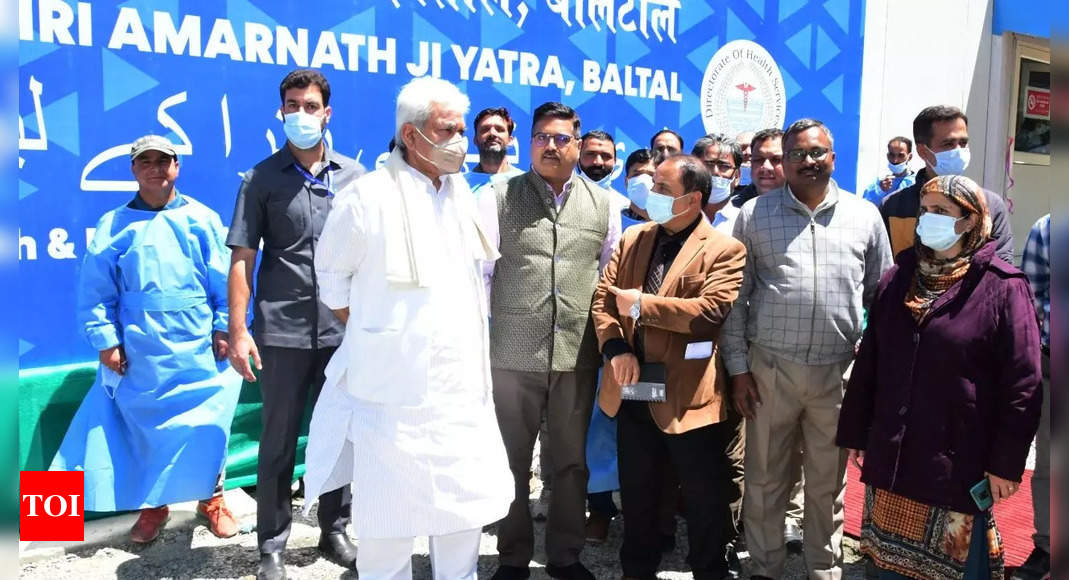 SRINAGAR: Lieutenant Governor Manoj Sinha on Friday inaugurated a 70-bed DRDO hospital for the pilgrims of the Shri Amarnathji Yatra during his visit to Baltal in Sunday margin in Ganderbal.
Later, Sinha visited Pahalgam Axis of Shri Amarnathji to oversee the preparedness of various departments to facilitate the “yatris” (pilgrims).
The Amarnathji Yatra will commence on June 30 and carry on till August 11.
One such medical facility has already been set up at Chandanwari in Pahalgam for the yatris, Dr Mustaq Rather, director of health services, J&K, said.
Sinha also conducted on-site inspection of facilities on travel routes of Baltal and Pahalgam and chaired review meetings at the base camps, which discussed lodging, health care, communication network, sanitation, water supply, weather forecasting, emergency response, fire safety, and other basic necessities for the 6-week pilgrimage.
The DRDO hospital has been funded by the ministry of health and family welfare and has facilities like a general ward, OPD, an ICU, an oxygenated ward, a pharmacy, a laboratory, x-ray, and ultrasound, Mustaq Rather said.
“Better coordination among various agencies is of utmost import for better facilities, seamless journey, and spiritual experience of the yatris. All the departments have been involved in the yatra management to ensure the best possible facilities, as we expect a large number of devotees from across the country for the annual pilgrimage,” Sinha said.
During his visit, Sinha interacted with camp directors, police brass, and other security agencies and sought the status of the yatra arrangements.
Sinha complimented all stakeholders for their efforts in completing the assigned tasks on time. He further called for better coordination among all the departments involved in yatra management for the safe and successful conduct of the annual pilgrimage.
Arun Kumar Mehta, chief secretary of J&K, passed explicit directions pertaining to the deployment of sufficient sanitation staff, installation of dustbins at appropriate locations, training of service providers, medical aid for high altitude sickness, displaying of rate lists, minimizing the waiting time for yatris, and illumination of camps and the track.
He further stressed on making the yatra plastic-free.
Nitishwar Kumar, CEO of Shri Amarnath Ji Shrine Board, directed the officers concerned to stock 10 days of essential commodities, besides stocking up diesel for gensets, in advance, at all identified locations on the yatra track.
Mustaq Rather said that there are 70 health facilities and 100 ambulances available for Amarnathji Yatra this year.
Rather said they have kept 70 health facilities from Jawahar Tunnel to the holy cave on both routes including Chandanwari and Baltal, which include six base hospitals, medical aid centres, emergency aid centres, and 26 oxygen booths.
He said that in addition to that they have 11 on-route facilities, 17 other facilities which have been kept alert and more than 100 critical and basic care ambulances.
Rather added that all the hospitals in the vicinity will have emergency response systems in place and have been equipped with all facilities and adequate staff.
He further said they have kept ICU beds and oxygen available on both sides and at least 1,500 staff members are being deployed there to work in three shifts with additional residential facilities for them at all levels.
“Isolation facilities have also been kept available everywhere,” he said, while requesting yatris to keep warm clothes with them.
The Amarnathji Yatra is being held this year after a two-year break due to the Covid-19 pandemic.
The authorities expect nearly 18 lakh pilgrims this year to visit the Amarnath Cave, situated at an altitude of 3,888 metres, about 141km from Srinagar, the summer capital of Jammu & Kashmir.
Pilgrims trek through the mountains of south Kashmir Himalayas to the Holy Cave Shrine of Shri Amarnathji.
The pilgrimage is only undertaken during the months of summer, or in the Hindu month of Shravan (July-August).
The Holy Cave Shrine of Shri Amarnathji has the image of Lord Shiva, in the form of a Lingam, which is formed naturally of ice (stalagmite).
Shri Amarnathji Yatra commences on a specific date, usually on the auspicious day of Skandshasthi as per Hindu Calendar, and concludes on Shravan Purnima (Raksha Bandan).
Registration for Shri Amarnathji Yatra usually begins on March 1, every year.