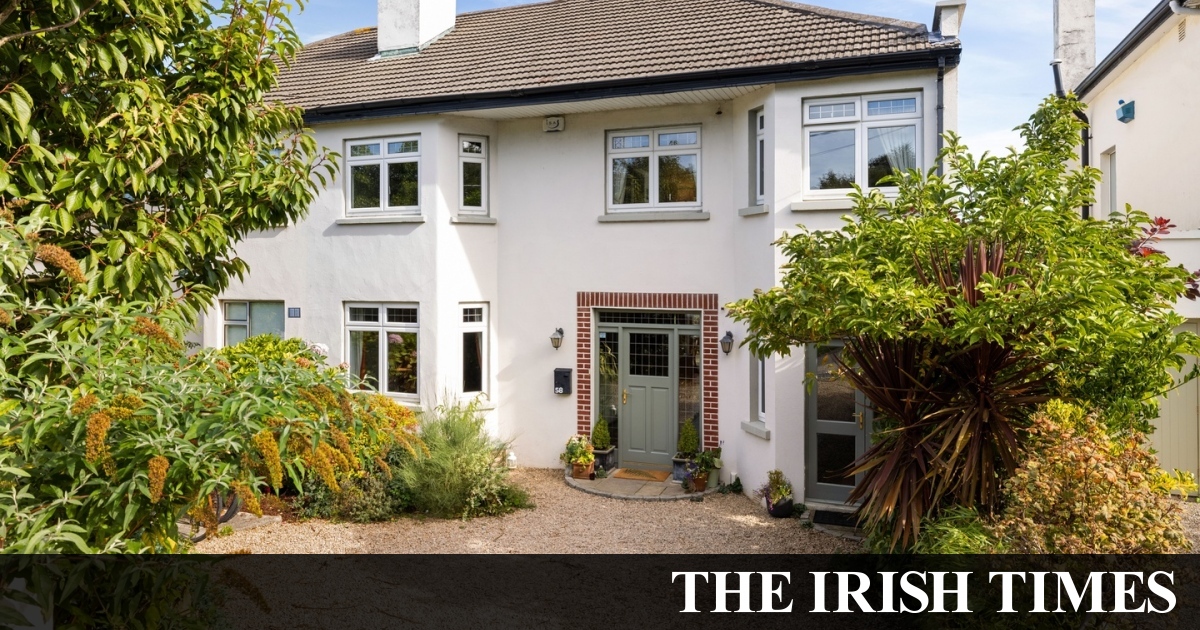 “There’s a little bit of us all in this house,” says the owner of Kincora at 58 North Avenue in Mount Merrion. By “all” she means herself, her husband and her seven children who grew up in this bright, inviting home. It is set back from the main road, just below the St. Thérèse church, opposite the entrance to the wildlife park in all its autumnal splendor and within sight of the local shops. Neighborhood facilities include popular Michael’s / Little Mike’s restaurant on Deer Park Road; Pinnacle development is ongoing nearby.

The house is ideally located for young children, within walking distance of Scoil San Treasa and next to two small greens – one right outside the front gate and the other requires longer legs to jump the wall a few feet away behind the community center. It’s also a short hop to secondary schools and just minutes from UCD.

The gravelled front garden is framed by fine trees such as a cherry and a magnolia and there is space for a car as well as a stable multi-bike rack.

The owners have expanded and upgraded the house and added a two-story extension in 2002, which ties in well with the original façade from the 1950s; it is now 192 m². They turned the garage into a playroom with a glass door, convenient for bringing friends and for storing helmets, coats, and boots. It has been used as an office since last year, fortunately adding a piano – mostly work and some play.

Patterned tiles on the front of the hall lead to a solid wooden floor, which was laid about 10 years ago during a further expansion on the ground floor. On the right is the office, on the left a living room with a bay window and an open fireplace. There is a guest toilet under the stairs. The BER is D1.

From the hall you can see the greenery through the glass back doors, and when you step into the large open kitchen / family / dining room you feel right in the center of the house, with sofas forming an L around a fireplace and with a spacious dining table by the doors. In addition to the four skylights, there is a large wide window at the business end of the kitchen that looks west over the garden and tree tops.

The French doors open to a terrace that stretches the width of the house and catches the sun during the day. Steps lead down the side corridor into the grassy garden which leads back into the converted garage. It is partially covered and can also be entered from the well-equipped utility room next to the kitchen.

The stairs run in a rectangle up to the landing on the first floor with three double rooms, one single room and a blue and white family bathroom. The front storage room has been enlarged to take up the space above the garage so it is now a large master bedroom with its own shower room; The two front windows offer “our private view” over the park, says the owner.

A skylight provides light in the stairwell, which continues to the converted attic, a nice, quiet room with plenty of headroom and storage space under the eaves. You can see the sea from two other Velux windows, with Lambay, Howth and Ireland’s Eye over the bay during the day; At night the church lights twinkle overhead.

You can also see why the home and site owners were so excited when they bought here 23 years ago – now that part of the family works and studies from home, they need a little more space and are moving into a house very close to. No 58 is being sold through Ed Dempsey & Associates at an offer price of 1.15 million euros.