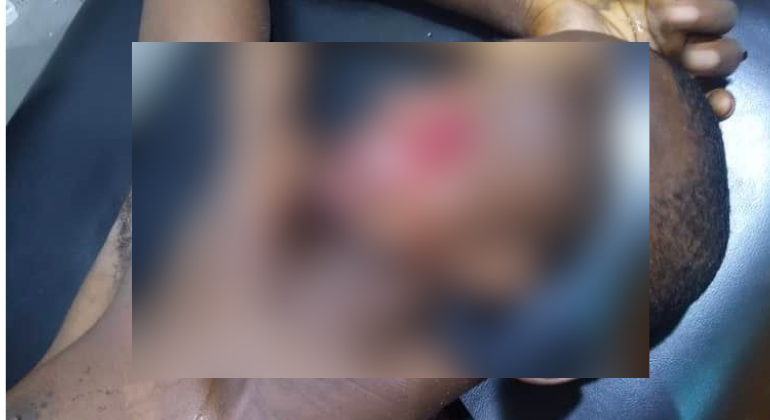 An officer of the Lagos Neighborhood Safety Corps has been accused of blinding a man, Quham Adelakun, during a party on Bamgbose Street, Lagos Island, Lagos State.

PUNCH Metro learned that trouble started when Adelakun, who lived on the street, tried to enter the venue of the event on Sunday.

However, guards at the event, including the LNSC officer, stopped him after he could not show his invitation card.

An eyewitness, Lateef Shonibare, said an argument ensued between Adelakun and the guards, which resulted in a brawl.

He said, “Quham (Adelakun) was inside the venue but stepped out. As he was about to enter again, two guards stopped him. He was bullied and so he tried to fight back.

“All of a sudden, they started beating him. The best way he could defend himself was to pick up an iron rod. But those officers overpowered him and hit his face with their bats about four times, then he fell down. When he stood up, he tried to defend himself by breaking a bottle. Immediately those officials saw this, they ran away. Quham couldn’t see anything at that point. I tried to calm him down and took the bottle from him.

“Those officers and their leader were saying he stabbed himself in the face. Is that possible? The officers and Quham were all drunk.”

One of the organizers of the event, who did not want his name in print, said he invited the LNSC officer to secure the place because the party was strictly by invitation.

He said, “When the party was about to close, I started to hear a noise. As I went outside to see what was going on, I saw a guy with blood on his face. I asked what happened, and he said somebody injured him.”

He noted that he assisted in rushing the victim to a hospital.

Photos of the victim seen by PUNCH Metro showed him lying on a hospital bed with blood on his face as one of his eyeballs popped out.

The LNSC officer that allegedly attacked Adelakun was identified as Olawale.

speaking to PUNCH subway, the victim, who was still receiving treatment, confirmed the identity of the LNSC officer.

He said the second official that also beat him was in mufti.

Adelakun stated that the guards prevented him from going into the venue despite his pleas.

He said, “I pleaded with the guard and he said I should enter, which I proceeded to do, but he bounced me back. I had to ask to know why because I had already pleaded before proceeding. There was another guard who was putting on LNSC uniform. I once again pleaded to go inside the venue, but they asked if I knew anyone inside.

Adelakun said people at the scene expressed displeasure at the way he was beaten by the LNSC officer and the guard in mufti.

“While trying to run away from their grip, the LNSC officer hit me with a stick in my eye; my eyeball pulled out and I was unable to see,” he added.

Asked if he broke a bottle during the incident, he said, “That is a blatant lie. two persons brutalizing me; what do you expect me to do? I ran away from them. I didn’t break any bottle. They hit me with a stick. I even wanted to pick something, but I couldn’t because I was weak.”

The LNSC, in a statement on Wednesday, said the deployment of the officer did not follow due process.

The statement read in part, “The standard practice is for citizens requiring the services of the agency to communicate their desire in writing to the headquarters of the agency, from where an approval is communicated formally to the command responsible for such deployment. This was not followed and subject to the above, the agency is termed to be unaware of the deployment and subsequently cannot account for the actions or inactions of the officer in question.

“That there is a need to ascertain the real facts of the incident with a view to dealing with the matter appropriately. In this regard, an ad hoc investigation panel has been instituted to conduct a thorough investigation and make appropriate recommendations to the agency.

“The incident is unpalatable and the agency expresses its deepest unhappiness at it, while it wishes to implore the general public to kindly remain calm pending the completion of the investigation in order to ensure justice is served.”