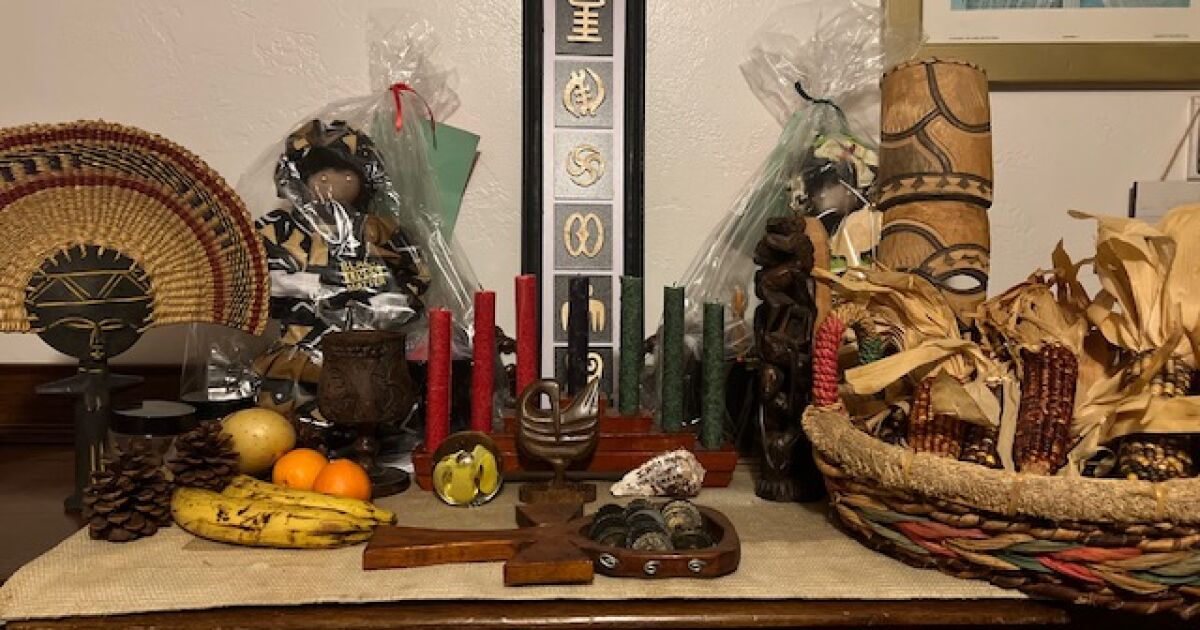 MayasaEd.D., is chair of the Black Studies Department at San Diego Mesa College and lives in San Diego.

This year Kwanzaa has a special meaning for me because on Dec. 28, 2021, I was hospitalized in San Diego for respiratory failure due to COVID pneumonia while my sister laid in a Los Angeles hospital with COVID double pneumonia. Both of us almost died. Yet the principles and values ​​of Kwanzaa that I’ve come to know, fully embrace and practice over the last 40 years, not only helped save my life, they also contributed greatly to my overall recovery.

So what is Kwanzaa and why is it relevant?

Kwanzaa — meaning “first fruits” in Kiswahili — is an African American and Pan-African holiday that is celebrated by millions of people throughout the African diaspora (Africans throughout the world). Its ancient origins have roots in traditional African societies where Kwanza — Swahili with one “a” — is represented in annual ceremonies and/or festivals giving thanks for the year’s harvest.

In the United States, however, the mid-20th century reflected a period of heightened social and political unrest, where the call for Black power within a transitioning Civil Rights era produced new ideologies and forms of resistance to structures of systemic racism and White supremacy through a black freedom movement. It was during this time that Kwanzaa (spelled with two “a’s”) was created in 1966 by Dr. Maulana Karenga (a professor and chair of Africana Studies at California State University Long Beach) as a cultural expression and part of the liberation struggle for African Americans to be themselves and free themselves.

Kwanzaa is observed from Dec. 26 to Jan. 1 as a seven-day celebration of family, community and culture centered around a communitarian African value system known as the Nguzo Saba (seven principles). Each night, a candle is lit for one of the seven principles — Umoja (unity), Kujichagulia (self-determination), Ujima (collective work and responsibility), Ujamaa (cooperative economics), Nia (purpose), Kuumba (creativity) and Iman (faith) — that focus on is focused upon through the communitarian values ​​and practices of continental Africa and African American culture. Together with other symbols and artifacts, the spirit and importance of Kwanzaa is expressed through song, dance, food, storytelling, discussions, creative production and spirituality.

It’s important to note that Kwanzaa is not a replacement for Christmas or a religious holiday. As a celebration of family, community and culture, the spirit of Kwanzaa also represents a celebration of freedom and liberating consciousness. It serves as a time for reflection, self-love and self-validation — and as an act of freedom, reaffirmation and recommitment to being self-defined, self-determined and self-directed in our pursuits of understanding what is good, right and just as an African and a human being in the world. It also honors our ancestors upon whose legacies we stand in dignity, agency and self-respect in ways that we commit to strive and to build upon so that each generation does better than the last.

As this year comes to an end and we reflect upon the social, political and racial unrest of the last three years (at least) and ask ourselves, what lessons have been learned? What have the more contemporary movements of the 21st century, such as Black Lives Matter, #SayHerName and #MeToo, shown us? What relevance does Kwanzaa have at this moment?

dr Karenga reminds us that Kwanzaa is an alternative way for Africans in America to relate to themselves and a model for good in the world. It promotes our gathering together in harmony, planting seeds and possibilities of good while cultivating them with care, consideration and patience needed to bring about healthy first fruits. It enables us to open new perspectives, possibilities and practices in the struggle to manifest new histories and hope for African people and humankind.

It was this framework of thought, word and deed that brought me back to life. Throughout the year, members of my community gathered in unity, collective work and responsibility to support my sense of self-determination and nurture my will to live at that difficult time. By sharing time, talent and treasures in creative and purposeful ways, they strengthened my faith with patience and love that enabled me later to stand up and spread my wings. They were the wind beneath them that enabled me to fly once again.

Lastly, Kwanzaa is an investment in the future. It’s a reminder to African people of the diaspora of who we are and of what we’ve endured and overcome. It’s a commitment to manifesting the best of ourselves in the unlimited possibilities that we as human beings can be in the world.