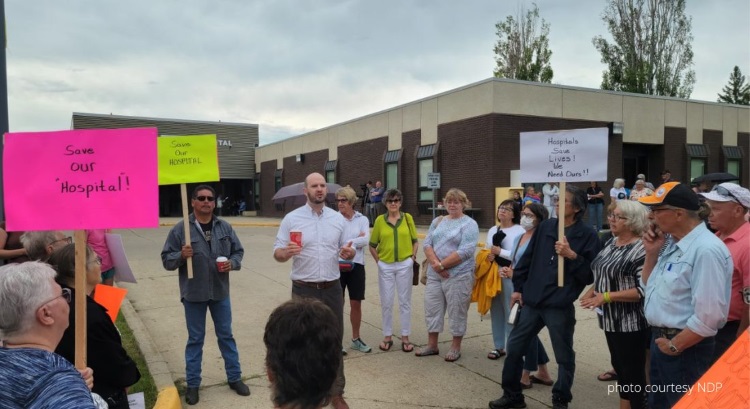 The decision to close acute care beds and reduce services at the Kamsack Hospital was the focus of a rally for residents of the region yesterday. CUPE workers and representatives from the opposition NDP marshalled along with residents to protest the recent actions that included the closure of acute care beds and reduction in services at the hospital’s emergency room.

CUPE spokesperson Bashir Jalloh was critical of the system which was allowing reliable access to health care in rural Saskatchewan to slip away.

Canora-Pelly MLA Terry Dennis and Minister of Mental Health and Addictions, Seniors and Rural and Remote Health, Everett Hindley, were in Kamsack touring the hospital.

Groups of public attendees confronted the pair, demanding action be taken. Hindley addressed members of the press on hand promising to “get the beds reopened.”

Opposition Critic for Seniors Matt Love reiterated his concern for the state of rural health care and joined in the call to reopen beds and restore services.

“This is a government that refuses to take responsibility for decisions that they’ve made,” said Love. “After being in power for fifteen years, the healthcare staffing crisis is theirs and theirs alone. The hundreds of people who came to this rally are tired of excuses, they want solutions.”

An NDP release noted that Kamsack’s hospital is the only acute care facility providing service to surrounding towns and many First Nations. The last of the Kamsack Hospital acute care beds shuttered yesterday after months of service disruptions. Patients are being redirected to neighboring hospitals in Yorkton, Canora and Preeceville, all of which have also been subject to service disruptions as well.

Part of the issue for the hospital is securing staff. Hindley communicated to the crowd that the government and the SHA are working together to recruit staff for the facility.