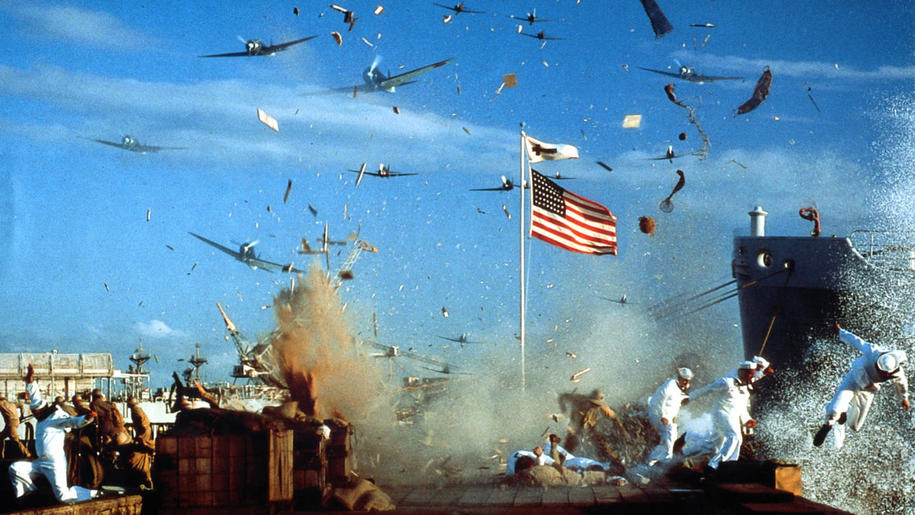 This is a repetition of a story I wrote eight years ago, in 2013. I’ve added a few details and a dedication. I’ve set this story to be posted at exactly 12:00 PM EST. It is currently 7:00 a.m. in Pearl Harbor, Honolulu, Hawaii. It was then that the first wave of attack planes from the Empire of Japan began to pound on the unsuspecting crewmen and civilians of Pearl Harbor. The picture above shows that moment, including a Navy pennant marking the “call to worship” on the decks of the anchored ships.

First of all, this devotion; Sockpuppet wrote this yesterday:

“… I was at my father’s side at dawn on his 90th birthday. I gently woke him up by singing Happy Birthday softly in his ear. It was a good day for him aside from the agonizing breaths as his heart failed due to congestive failure. More morphine to make him feel good. The presence of my mother, who passed away six weeks ago she 88th birthday, felt sweet in the room. (The hospice was beautifully decorated for Christmas. I swear it was studded with angels! The staff was so nice and comforting to all of us.)

Shortly after midnight, on December 7th, Pearl Harbor Day, this brave warrior of World War II died. A few months earlier he had said to one of my sisters, “I spoke to the Lord and asked him to bring me to my 90th birthday. He could take me at any time afterwards, but please, I want my 90 .. “

And so it was.

At this very moment, Kossack Buster40004 joins the celebrations to mark the 80th anniversary of the attack on Pearl Harbor. Buster is a combat veteran from Vietnam. He took away souvenirs and memories of Sockpuppet’s father and my cousin Jimmy Gates. He wanted to make sure they were remembered and honored today – he wanted them both to be at Pearl Harbor on that special day in history.

Our families are grateful to Buster for this kind gesture to two who knew that dark day in December 1941. His view is, of course, that it is a sacred duty to see that they are remembered in this place and time.

I remember where I was and what I was doing on December 7, 1941, just after one o’clock in the afternoon.

My father called me over to where he and a few of his friends were sitting next to the huge Stromberg Carlson 350R console radio, the front doors swung open. They leaned forward and clung to every word that came out of the polished walnut cabinet.

I sat on the carpet in front of the radio and tried to understand what was going on. As young as I was, I remember the horror I felt that Sunday afternoon.

The breathless announcer spoke so quickly that he sometimes stumbled over his words. The usual calm and comforting baritone of a professional radio news reporter has been replaced by an almost panicked staccato, an octave higher than his voice would normally have sounded. One sentence stuck in my ear all these years

“You stabbed our boys in the back!”

At first I thought they were talking about Japanese soldiers with the soldiers and sailors in the back bayonets, like those I had seen in the newsreels about the Nanking massacre. Even as a child, I knew war was on the horizon. Six weeks earlier, a Nazi submarine had sunk the destroyer USS Reuben James while escorting a convoy of cargo ships into England with food and supplies.

Woody Guthrie wrote a song about that Ruben James:

Everyone thought that when the war came it would come from Europe. No one but a few farsighted tacticians like General Billy Mitchell looked west and even predicted that an air attack would come. Mitchell was tried on trial for his outright military and political heresy.

When Americans were killed in the first military engagement of World War II with the sinking of the Reuben James, President Roosevelt withheld troops and sailors to fight despite the provocation. Hitler counted on this reluctance, otherwise he would not have been so bold as to sink an American warship. He knew the US was unwilling to go to war because the number of American troops had been reduced to very low numbers and much of the equipment was either out of date or out of date. The country was recovering from the Great Depression and needed time to rearm again.

Admiral Yamamoto took all options from Roosevelt that Sunday morning. Hitler is said to have been angry with his Japanese allies.

That brings us to the story of my cousin Jimmy.

My cousin Jimmy Gates was from Cleveland, Mississippi. He grew up hunting squirrels and other game to bring food to the family table during the Great Depression. He was a blast.

After he graduated from high school, the economy still suffered from the Great Depression and the odds in the cotton fields of the Mississippi Delta were slim. He saw the peacetime military as a way to escape the hot fields and joined the Army Air Corps as a private. He liked airplanes and thought it would be a much better branch of service for him than being an infantryman. For Jimmy, flying was better than walking every day.

The Air Corps liked Jimmy too. He was an excellent marksman and had unusually good eyesight, traits that seem to run in our family (when I was his age my eyesight was 20/13). They made Jimmy a bombardier and nose shooters in a B-17 bomber. It was a good choice because its ability to target bombs was eerie, at a time when the average bomb hit a quarter of a mile from its intended target.

Jimmy was stationed at Hickam Field, an Air Corps aerodrome adjacent to Pearl Harbor. That Sunday morning, just before he went to the canteen for breakfast, he was playing billiards in the barracks’ leisure room. He heard planes flying with combat power settings and bullets hitting things outside. He ran to the window and saw planes with the “red meatball” markings circling overhead and diving into Hickam Field.

He jumped out the open window knowing that buildings would be a target. After all, he was trained as a bombardier and knew exactly which bomb targets would be aimed at. He rushed out the window into the flowerbed and ran. He had only taken a few steps when a bomb hit the roof and exploded in the room he had just vacated. The explosion knocked him to the ground, but he got up and kept running. He wanted to be as far from the buildings and the airline as possible.

Some of his pals never made it out of the flowerbed. This bomb killed 35 men.

Those buildings and parked planes were targets, and he had no desire to be a target that day. He was then a 24-year-old sergeant and wanted to be 25. He knew his next birthday could be his last if he could live that long.

He had the chance to fight back soon enough. As the runways and destroyed hangars were being repaired, new B-17 bombers arrived from mainland America.

After a few more weeks of training, Jimmy Gates went to war. He had lost good friends that December morning. It was payback time.

When his eye wasn’t glued to the eyepiece on his top-secret Norden bombshell, he kept the machine guns in his nose on the lookout for enemy aircraft.

He sank several Japanese warships, one of them by placing a bomb in the funnel. Apparently one of his teammates had bet him that he wouldn’t make it. Whoever bet he couldn’t put a bomb in the chimney of a ship had never gone squirrel hunt with him and his .22 rifle or that bet would never have been made.

Jim received sole credit for five Japanese warships and one Zero. It was most unusual for a bombardier to shoot down a fighter jet. There were more that weren’t independently verified.

He told of a mission in which they were badly shot at by anti-aircraft fire. The crew voted on whether to disembark or stay with the crippled plane. He decided to stay. As he jumped from the damaged plane, torn straps of his parachute began to fall from a hole in the parachute pack. In the middle of the remains of his parachute was a piece of anti-aircraft grenade the size of his hand.

The New York Times on Aug. 7, 1942 reported that Air Corps Sergeant James F. Gates of Cleveland, Mississippi, was awarded the Silver Star for Valor in the Solomon Islands. It wouldn’t be his last medal or his last Silver Star. Jimmy wore very little lightning bolt on his uniform.

When it was founded in 1958, it was awarded the Air Force Commendation Medal. The AFCM is introduced to Airmen for “… continuing heroism …”.

Jimmy survived World War II but stayed with the Air Force. Because of his outstanding skills, bravery, and intelligence, he was sent to the officer candidate school and was now an officer. When B-29s arrived in the Pacific, he was assigned to a B-29 squadron. It flew until the end of the war, including some of the latest attacks on Japan.

In the early 1950s, Jimmy and his wife visited our home. I had about a million questions, but some he couldn’t or wouldn’t answer. I asked him if he was one of the B-29 crews selected for atomic bomb training.

He changed the subject. I remember suddenly wanting to talk about the P-38’s outstanding performance on dives and climbs compared to the Zero. I later found out he was stationed on Tinian Island and assigned to the 509th Composite Bomb Group, and my suspicions were proven correct.

Jimmy kept flying during the Korean War. He was one of those pilots for whom flying was a way of life, so he stayed on duty. At various times he was assigned to B-47 and then B-52 bombers when his squadron got them. He was a veteran of the three wars and stayed through the Vietnam War.

Jimmy retired from the Air Force with the rank of major. He eventually fell victim to Alzheimer’s disease and spent his final years in a care facility in Springfield, Missouri. He is buried in the Missouri Veterans National Cemetery in Springfield.

I prefer to remember the young man who took his brother Billy and me to the Saturday afternoon matinee and who loved to hunt squirrels. He joked when he popped out of the open window into the flowerbed that sunny Hawaii Sunday morning, but I know something now that I wasn’t aware of then. There was a hell of a lot of pain in those memories.

This morning 80 years ago.