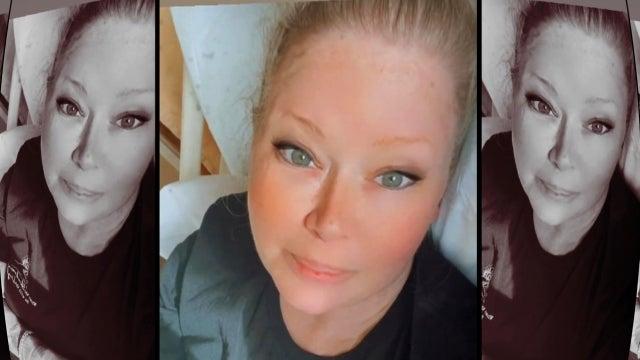 Jenna Jameson shared an update with her fans this week about her mysterious illness. The mom of three is finally home after spending an extended amount of time in the hospital. The video, posted on IG is shocking her fans.

“I am still sick, as you can see. I am in bed, but I am at home, which is really nice,” she shared with her followers. The heavily filtered video featured the 47-year-old in her bed, resting on Thursday.

“I’ve been getting a lot of sleep,” she insists. “We don’t know what exactly is going on. I still am unable to stand, but I am feeling better and things are going a lot better, so thank you for your support.”

Jameson has been battling what her doctors believe is a neurological disorder for some time now but are unable to figure out precisely what is going on with Jameson.

The former adult film actress spent about two months in the hospital and left with no answers about what seems to be plaguing her body. She shared with fans in early February that she is currently confined to a wheelchair and spends most of her days in bed.

“I still have more testing to do, but it seems there’s something off with my femoral nerve, and it’s affecting my strength in my legs,” she shared on her stories at the time. “So I am still in a wheelchair, unfortunately, but I hope to be out of the wheelchair soon and walking, so say a little prayer.”

However, she stayed very optimistic encouraging fans to be strong with her. She also shared that her partner, Lior Bitton has been extremely helpful.

While the actress was in the hospital Bitton took over updating her fans on IG. He shared that she was a tough cookie hanging in there but misses being home. He also noted that the popular diagnosis among her concerned followers, Guillain-Barré syndrome, was in fact not the cause of all this.

He stated, “after a second test and five rounds of IVIG,” the autoimmune disease in which the immune system attacks the body had been ruled out officially. Jameson and Bitton first began sharing details about the former adult film star’s mystery illness in January where they noted that she was in the hospital for weakness in the legs. “Her muscles in her legs were very weak. So she wasn’t able to walk to the bathroom. She was falling on the way back or to the bathroom,” Bitton claimed.

“I would have to pick her up and carry her to bed. And then within two days, it got really not so good, her legs started to not hold her, she wasn’t able to walk.”

Then two days later she was officially not walking at all leaving both she and Bitton scared about what steps they would have to take next.

Jenna Jameson & Lior Bitton Are Being Strong During This Time

Jameson was a trooper sharing with fans in real-time how much movement she truly has in her legs, specifically, her left leg. She acknowledged it was little movement, “but my quad strength is really, really, really weak, and as you can see I have some atrophy happening.”

She also notes to fans not to be alarmed regarding the appearance of her legs in the IG Story. “My legs are incredibly skinny. But don’t get too alarmed, because my legs have always been ultra skinny. So don’t judge me. We will be back to the best soon!”

Earlier in her diagnosis, Jameson shared that she had undergone several other tests like MRI scans, a CT and even a spinal tap test to rule out other illnesses. “She’s not feeling so good. She was actually throwing up for a couple weeks, and we had to take her to the hospital,” Bitton shared at the time.

Jameson insists that she is hanging in there and will update fans again in the near future.