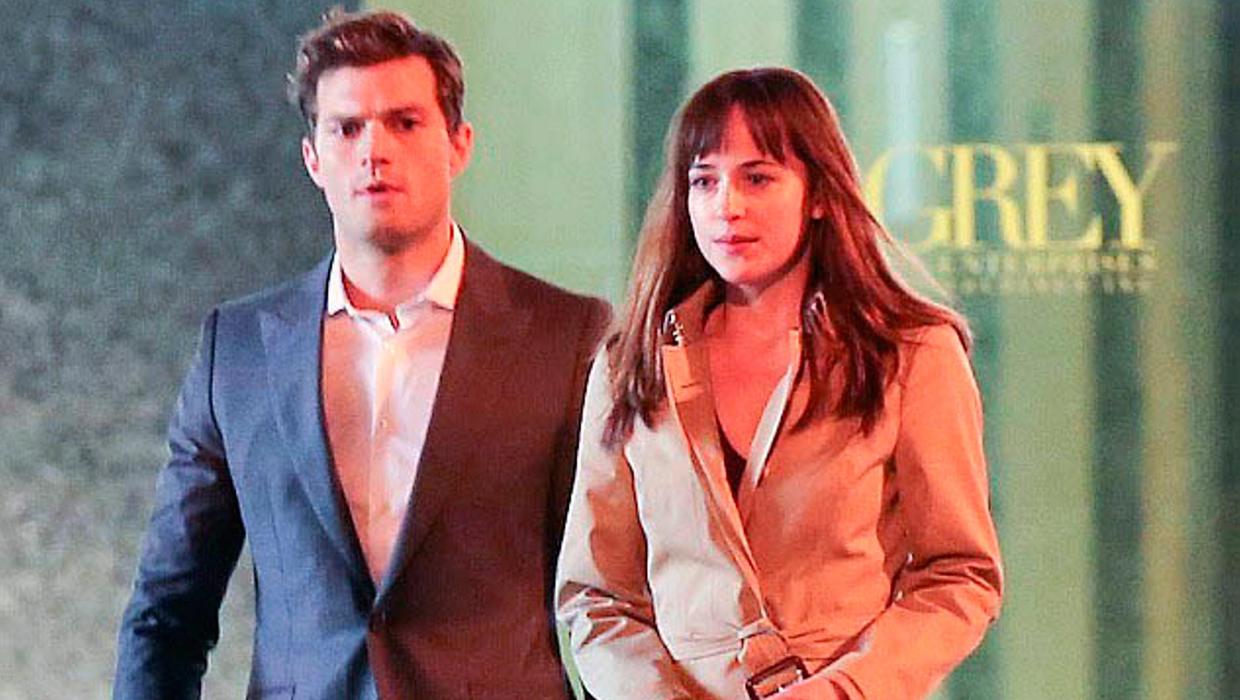 While working on her Oscar-winning biopic Judy, Renée Zellweger had an awkward mishap while filming a kissing scene.

“I did not know until this kissing scene and I look at him with horror and I realise, ‘Am I more upset that I got that on his face – and we haven’t cut so I can’t be touching his face in a way to try and get it off – or that it’s attached to my head and there’s so much more where that came from?’” said Zellweger.

“The glue and the thing and the chemicals or something, I don’t know, and some of it would just sneak out the crevice [on the side].”

Zellweger is not alone in experiencing mishaps on film and TV sets. Sometimes they are hilarious—and other times, they are just plain embarrassing, or even dangerous.

The incidents can range from falling asleep during a sex scene, to knocking out a co-star.

It’s no surprise that sex scenes are a breeding ground for mishaps, such as when actors are forced to film uncomfortable scenes while wearing a modesty patch or sock to hide their body parts. Even in a time where intimacy coorindators are a regular presence on set, things don’t always go exactly to plan.

Here are some of the biggest on-set mishaps in film and TV:

The actor says that acting in the scene where she has sex with Leonardo DiCaprio on a bed of money was really painful in The Wolf of Wall Street. “I got a million paper cuts on my back from all that money! It’s not as glamorous as it sounds,” she said. “If anyone is ever planning on having sex on top of a pile of cash: don’t. Or maybe real money is a bit softer, but the fake money is like paper, and when I got up off the bed, I turned around to get my robe and everyone gasped. I said, ‘What is it?’ And they said, ‘You look like you’ve been whipped a million times. Your back is covered in a thousand red scratches.”

Margot Robbie and Leonardo DiCaprio in The Wolf of Wall Street.

Margot Robbie and Leonardo DiCaprio in The Wolf of Wall Street.

During the filming of the sequel to Steven Spielberg’s Jaws, cast members were terrified when real hammerhead sharks started circling them in the sea. The trouble was that their screams went unheard. The crew didn’t think they were in real danger to start with because it was written into the script that they yelled for help at that point.

The fourth in the Rocky film franchise to focus on the boxing career of the fictional Rocky Balboa, played by Sylvester Stallone, has some gripping and authentic-looking fight scenes. It’s no wonder then that during filming, Stallone actually asked Dolph Lundgren, who plays his opponent, Ivan Drago, to try to knock him out for real. But Lundgren hit him with such force that he was sent to the hospital and was in intensive care for over a week.

Brando was infamous for his bad on-set behavior. That is one reason why Paramount was nervous about getting him involved in Francis Ford Coppola’s mafia film. It didn’t start well, when on the first day of shooting, the actor who played the patriarch in the family, Vito Corleone, missed his overnight flight from LA to New York. His scene was rescheduled for the next day, but it cost producers $40,000.

In his autobiography, rapper Gucci Mane said he was so tired on the set of Harmony Korine’s crime film Spring Breakers, that he fell asleep during his big sex scene. The rapper, who plays Big Arch, a rival drug dealer of James Franco’s Alien character in the film, is seen having sex with one woman, while another sucks his toes. “I couldn’t keep my eyes open. I was knocked out, snoring . . . Harmony kept having to wake me up for takes.” In another interview, he explained why he was so exhausted. “I had a concert down there in St Petersburg, Florida, one of the days I had to shoot a scene. Same night. We started shooting at 10 o’clock in the evening until 1 or 2 o’clock.”

The action star broke his ankle while doing his own stunt on set of the sixth Mission Impossible. The scene sees Cruise completing a fast rooftop jump from one building to another, when his foot slams into the side of the wall. But instead of collapsing in a heap, he keeps going as if nothing has happened, until the end of the scene when he can be seen hobbling away. He said: “I knew instantly my ankle was broken and I really didn’t want to do it again so just got up and carried on with the take. I said, ‘It’s broken. That’s a wrap. Take me to hospital’ and then everyone got on the phone and made their vacation arrangement.”

Michael Imperioli is best known for his role as Tony Soprano’s protégé, Christopher Moltisanti in The Sopranos. During the filming of his death scene in Martin Scorsese’s Goodfellas, Imperioli cut his hand on a glass and was taken to hospital, where the doctors sped in to treat his fake bullet wounds.

During the filming of Groundhog Day, Murray was more irritable than usual as he was going through a divorce and was prone to disappearing from set. He had been asked to get an assistant to ease communication between him, the director Harold Raims and the studio. He was against the idea, so he hired somebody who was deaf and spoke only in sign language, which nobody on set, including Murray, could understand. Ramis said: “Bill said, ‘Don’t worry, I’m going to learn sign language.’ And I think it was so inconvenient that in a couple of weeks, he gave that up. That’s anti-communication, you know? Let’s not talk.”

It was a small mishap for Dunham when her nude patch kept falling off in scenes that required nudity. Dunham, who plays aspiring writer Hannah in her comedy-drama TV series Girls, said: “I stopped wearing the nude patch after the first season of Girls. There’s not one guy who works on that show who hasn’t seen the inside of my vagina. You glue it over your vagina. It gets sweaty and always falls off. My male co-stars, at the end of the day, don’t care.”

In one scene of Quentin Tarantino’s 2015 Western thriller, Jennifer Jason Leigh as Daisy Domergue plays a guitar – a vintage Martin guitar from the 19th century, worth roughly $40,000, which had been loaned out from the Martin Museum in Pennsylvania. But a misunderstanding on Russell’s part led to an expensive mistake. The valuable guitar was meant to be swapped over with a replica prop when he snatched it from her. Russell had not read the memo, though, and smashed the antique guitar against a wall, while shouting “Music time is over”. As a result, the Martin Museum – which called the guitar a “priceless, irreplaceable artefact” – vowed never to loan guitars out to movies again.

Anne Hathaway and Jake Gyllenhaal – Love and other Drugs

In a 2007 episode of the reboot of the Battlestar Galactica TV series, Olmos’s character William Adama, the commanding officer of BS Galactica, is playing around with a model ship when he gets carried away by improvising and smashes it to smithereens. The model ship was, however, museum quality and according to Olmos, who had no idea at the time, it was worth roughly $200,000.

The long-running TV show The Walking Dead focuses more on blood and violence than sex. But during one scene between Rosita (Christian Serratos) and Abraham (Michael Cudlitz) things nearly went pear-shaped when they had to get intimate in front of 30 crew members who were drinking coffee and eating ramen noodles. Cudlitz, who was on top of Serratos, said they were nearly naked but covered – but then as they were “humping”, the cover got knocked off, leaving Serratos practically naked. The actor said: “Then we just started laughing, because it’s ridiculous. It’s two people, we barely know each other, lying on top of each other naked.”

During the filming of Blazing Saddles, a man wandered into a scene of the film. He wasn’t part of the crew or cast, but when the director Mel Brooks got the man moved on, he returned again, apparently not understanding the request. Brooks then sent over a waiver for him to sign and left him in the movie for a laugh. He can be spotted at the end of the film wearing a jumper and standing on a sidewalk watching the action as people run out of the Warner Brothers studio front gates.

Malkovich was filming the scene in Being John Malkovich in which he storms off, after he discovers Craig Schwartz (John Cusack) has been renting out his brain to strangers. According to the director, Spike Jonze, a drunk extra then threw a beer can from a moving car at his head while shouting “Hey Malkovich, think fast!” Jonze liked the scene so much that he left it in the film. The extra had his day rate bumped up to $700 a day because he had a speaking role.

Viggo Mortensen – The Lord of the Rings

When Aragon (Mortensen) thinks that two of the hobbits are dead in a scene in The Two Towers, he lets out a gigantic primeval cry as he kicks his helmet in anger and falls to the floor. This behavior would seem like an appropriate response to the grief his character feels but in reality, the actor had actually broken two toes while kicking his helmet.