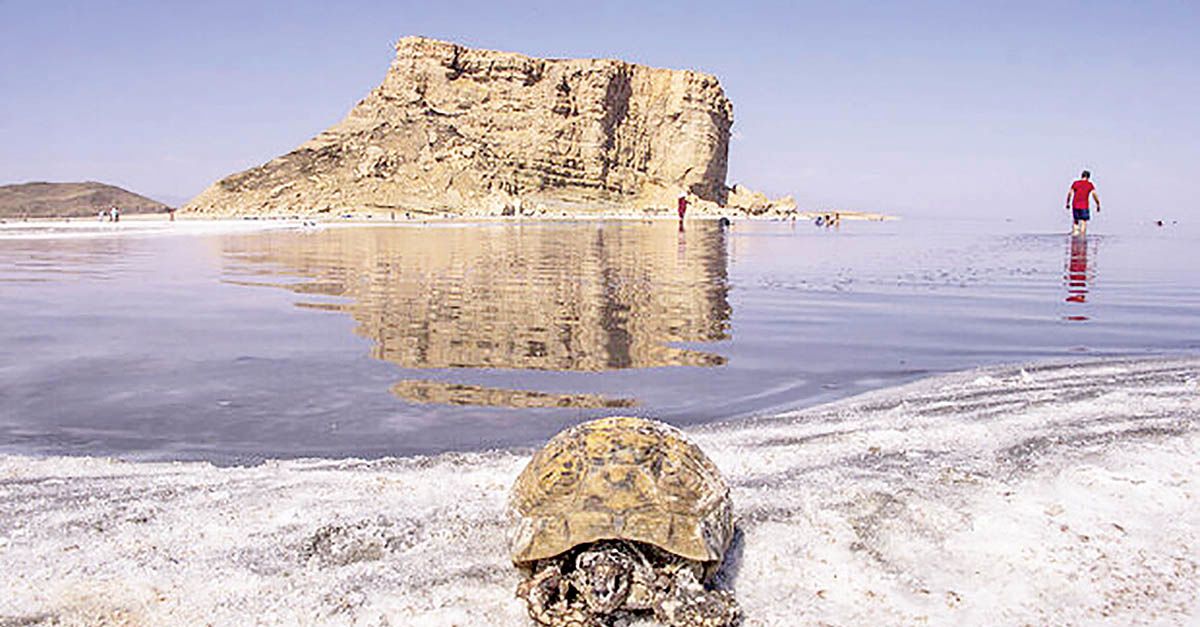 Police arrested activists when hundreds protested in northwestern Iran Saturday to government neglect of the country’s largest lake that has shrunk by 95 percent.

Lake Urmia (Orumiyeh), near Western Azerbaijan Province capital of the same name, has lost 95 percent of its water over the past three decades, despite government claims that it has appropriated hundreds of millions of dollars to prevent the environmental disaster.

At its greatest extent, Urmia was the largest lake in the Middle East and sixth largest salt lake in the world, with an original surface area of ​​5,200 square kilometers in 1970s, or 2,000 square miles. It had shrunk to 700 sq km by 2013. The lake began shrinking in the 1980s due to water mismanagement and climate change.

Activists had called for protests Saturday and a few hundred people gathered in Orumiyeh city chanting slogans against the government and parliament. Reports say that authorities have dispatched riot-control reinforcements to West and East Azerbaijan provinces and arrested at least 13 activists and citizens in Orumiyeh, Tabriz and other cities in the region. The detainees have been transferred to unknown locations.

The chief of police in Western Azerbaijan, Rahim Jahanbakhsh, called the protesters “villains” and anti-regime elements.

Activists had issued calls for protests in the past week, concerned about the complete disappearance of lake Urmia.

Lake Urmia during a brief revival in April 2019

In the past decade successive governments pledged money and projects to prevent the shrinking of the lake.

Authorities announced in 2014 that the government of President Hassan Rouhani appropriated 150 trillion rials – which can be about one billion dollars considering the lower rate of dollars against rial back then – were allocated for a seven-year plan as well as another $10 million aid by Japan and some other pledges by the United Nations Food and Agriculture Organization (FAO ) and the United Nations Development Program (UNDP) to save the lake. It is not clear whether or how the earmarked budgets were spent.

The lake began to revive briefly in the spring of 2019 when Iran’s drought came to a temporary end with months of heavy rains and floods. The lake’s surface expanded back to 2,000 sq kilometers by April 2019. But precipitation began to decrease again, with the 2021-2022 season becoming the worst dry period in recent memory.

The lake’s partial recovery would have been a golden opportunity for the government to act to save the ancient body of water, which is part of an ancient sea covering the region, together with Lake Van in present-day Turkey and the Caspian Sea, the largest inland lake.

But the government failed to unwind the disastrous water management mistakes that contributed to Lake Urmia’s gradual death.

Experts say groundwater extraction and using the water of the once bountiful Zarrineh Rud river− which feeds Urmia Lake − for irritating apple orchards planted in the last two decades have both contributed to the lake shrinking by nearly 95 percent in volume over the past 20 years.

During the presidency of populist politician Mahmoud Ahmadinejad a policy of food self-sufficiency and reinforcing agriculture led to unrestricted use of groundwater, building of ill-planned dams and other unscientific decisions. In 2021 alone, more than 100,000 tons of apples grown in the area went to waste with a failure to secure export markets.