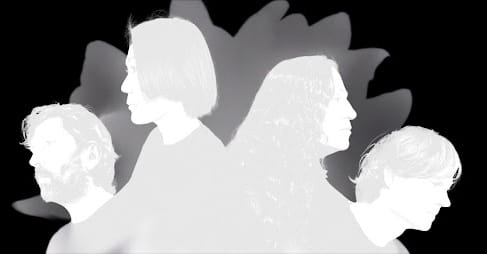 The FADER: Miracle level is a huge event in that it’s Deerhoof’s first album recorded in a studio. As a band that’s always innovating, what made you decide now was the time to throw out the old approach, and what about the proposition of recording in a proper studio with a proper producer made you uncomfortable in the past?

John Dietrich: It was kind of a lucky accident. Karl Hofstetter from Joyful Noise told us that Mike Bridavsky was interested in working with us at this great studio he helped design. While we trusted Karl, we didn’t know Mike, and he didn’t know us, so we wanted to make sure that we weren’t wasting time on explaining ourselves too much and could just hit the ground running. It’s not that we’ve never worked in studios before, it’s that we haven’t finished records in studios, because studios are incredibly expensive. What made this different was that Mike was really keen on doing the whole thing, from giving feedback on roughs to mixing.

Greg Saunier: Yeah, the studio itself wasn’t the uncomfortable part. Mike was the uncomfortable part! Who is this guy? He’s going to put the mics where? Why is he asking us to leave the room while he mixes the song? Turns out Mike was a miracle. A total stranger who cared about our record as much as we did. An instant true friend. We let someone into our little mini-universe. It was so fun.

Can you expand on Mike Bridavsky’s comment about how the band wanted to avoid your usual “months of obsessive tinkering?” Was recording in a studio partly an attempt to reduce the need for editing in post?

GS: I, for one, was convinced we would still desire months of editing in post. But we were feeling brave. We wrote songs we thought we could pull off live in one take. If I had a song on piano, well then Ed or Satomi had to play the drums. Any loops John painstakingly devised on his computer would have to be saved for the next album. We’ve never made anything anywhere close to this fast, and it was weirdly freeing to have our act together like this.

JD: There still ended up being months of tinkering, but it was before we had recorded a single note at the studio. The obsessive tinkering went into the front end, so we had an airtight idea of ​​how to approach the recording. We knew we only had two weeks in the studio to do the whole record, start to finish. We worked really hard to be rehearsed so we didn’t have to do 20 takes of each song. All of the material that ended up on the record are actual takes. We prepared in such a way that we could just blast through the material and not worry too much about little accidents.

Satomi, this is also the first Deerhoof record where all the lyrics are in Japanese. At this point in your career, do you feel more comfortable writing songs in your native language or in English? What do you feel are the advantages of Japanese as a songwriting language over English, and vice versa?

Satomi Matsuzaki: I feel natural and comfortable writing and singing both in English and Japanese after living in the US for almost 30 years. It is refreshing to sing the entire album in Japanese because I could present one of the minor beautiful languages. K-pop singers sing in English to approach American fans, but now Deerhoof feels that people are eager to reach out to experience expressions of other cultures.

GS: I also sang some main vocals on Miracle leveland I enjoyed having Satomi correct my pronunciation.

Instrumentally, the guitar recording technique seems to have been the biggest studio revelation on this record. Can you talk me through the process that led to the unorthodox setup you ended up going with?

GS: When we heard John’s demo for what became “Everybody Marvel,” we were all like, “How’d you get that guitar sound, John?” The way we recorded the guitars on Miracle level is not the same, actually. But it’s kind of the same.

JD: Yeah, I wrote my songs for the record on a half-broken, ukulele-type guitar that I got at a Saturday morning market in some little town in France on tour like 15 years ago. I like to write with janky, half-broken instruments sometimes because funny stuff happens. I experimented with running that sound through amplifiers. When I showed my demos to everybody, they loved the sound, and felt like it should be applied across the board. But the bridge broke off that guitar a couple of weeks before the recording. So we ended up miking hollow body electric guitars in a room that was separated from our amplifiers. The microphones were routed to tiny, distorted amplifiers in the other room, and that ended up being a huge part of the sound. At the same time, we plugged in normally, with pedals and all the sounds we were getting in rehearsal. And then, on top of that, we put both guitars through one amp. It was a huge headache for everyone concerned, but it came out quite cool.

GS: Every song had just one or two guitars, but it was like 50 tracks.