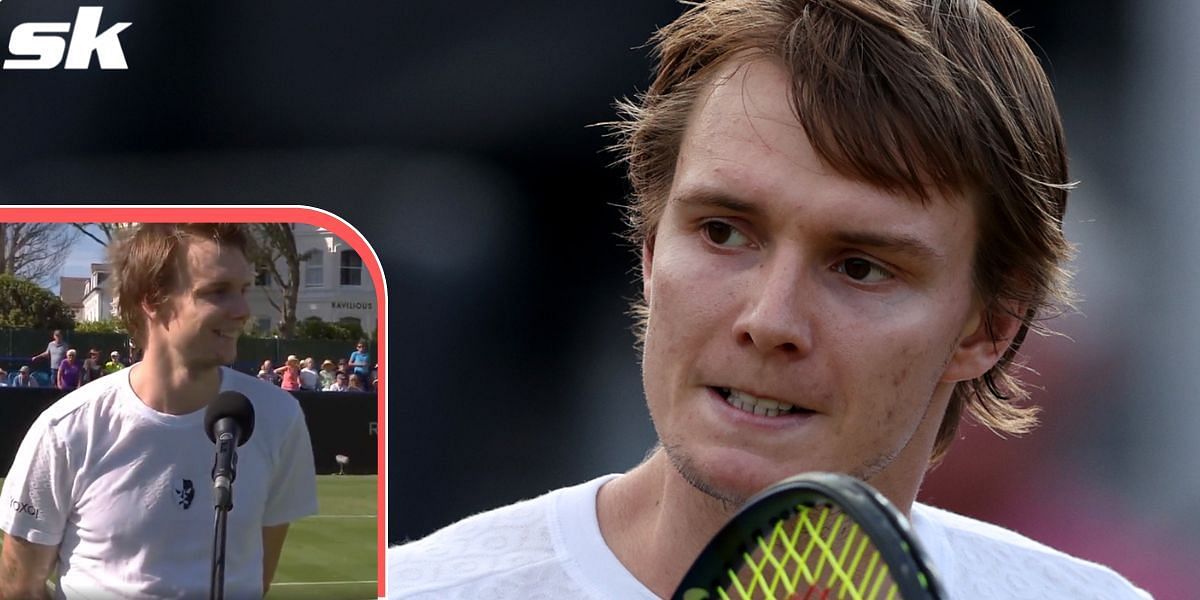 Alexander Bublik moved into the last 16 of the Rothesay International Eastbourne by beating seventh seed Frances Tiafoe 5-7, 7-6(4), 6-0 on Monday. But the most entertaining moment of the day was Bublik’s response to a question about his preferred surface.

In his post-match interview after sealing a sensational comeback win against Tiafoe, the Kazakh indulged a bit of banter with the interviewer. When asked about his preferred surface, Bublik remarked that he would rather lay in bed and enjoy the view.

“How about grass for you, do you enjoy playing on this surface other than when it’s windy in Eastbourne?” Bublik was asked.

“No, I’m still enjoying playing on grass, I mean at least I don’t need to run too much, you don’t get very tired, it’s not like clay so I mean everything besides clay is good so yeah I’ m happy,” he replied.

“Laying in a bed, I would love to just stay in the bed enjoying the view not staying here, but you have to do your job so, don’t you guys like the same? Nobody wants to go to their job,” Bublik answered.

Can Alexander Bublik pass the Round of 16 hurdle?

Alexander Bublik started the season in fine form, winning the Open Sud de France in February. He beat the likes of Queen’s Club finalist Filip Krajinovic and World No. 2 Alexander Zverev en route to the title. Since then, the world no. 39 has failed to get past the Round of 16 in his last 13 attempts.

The Kazakh has shown glimpses of his potential, with wins over 2022 French Open finalist Casper Ruud in the Davis Cup, Andy Murray in the first round at Indian Wells and Stan Warinka at the Monte-Carlo Masters.

It’s already over for Stan

For his great return on the tour in Monte Carlo, Stan Wawrinka managed to play 3 sets vs Alexander Bublik who finally took the win 3-6 7-5 6-2

It’s already over for StanFor his great return on the tour in Monte-Carlo, Stan Wawrinka has managed to play 3 sets vs Alexander Bublik who finally took the win 3-6 7-5 6-2 https://t.co/Z44ETj162D

Bublik has a great opportunity to break the round of 16 jinx as he squares off against Australian qualifier John Millman for a place in the quarterfinals at Eastbourne. But it won’t be easy as Millman is coming off a confidence-boosting win over Sebastian Korda.

The winner will most likely run into third seed Taylor Fritz in the last eight. The American is yet to win a match on grass this season.