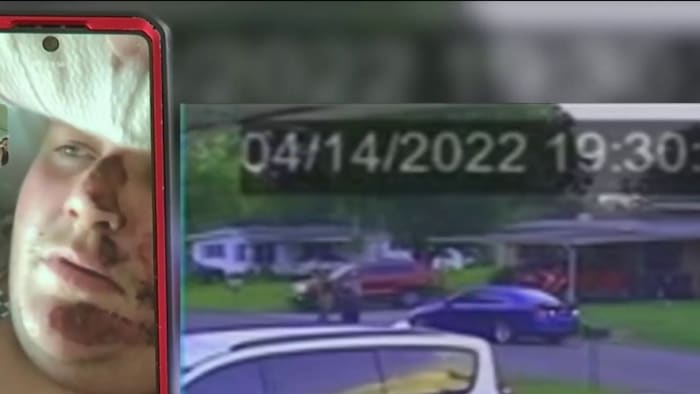 ORANGE COUNTY, Fla. – A local family is desperate to find the driver they say hit their father and sped off in their neighborhood. The man recorded the incident as it happened last Thursday.

“I lost days of my life I will never get back,” said Matthew Gerren, the man involved in the crash on Miami Road in Orlando.

Gerren spoke with News 6 from his hospital Monday, four days after the hit-and-run landed him in the hospital.

“I’m going to have a lot of rehab from this. I’ve got a lot of road rash too,” Gerren said. “He almost killed me.”

Gerren’s face is visibly cut and bruised. His family says his wrist and back are broken. He has already undergone at least one surgery and remains in the ICU. On Monday, his wife says he stood and took his first few steps.

“It made me very happy to see him up,” Jessica Myers said. “This is progress.”

Myers calls it a literal “step” in the right direction. She gave News 6 an update on her husband’s progress outside Orlando Regional Medical Center.

“He’s doing a little bit better,” Myers said. “They were able to get him up today. He was able to take a couple of steps.”

Myers tells News 6 she first confronted the driver behind the wheel on Colonial Drive Thursday night. She was on her way home from work.

“This blue Acura cut me off,” Myers said. “He was swerving in my lane. He was brake checking me. I got next to him and I was like, ‘What is wrong with you?’ He proceeded to throw something at my car.”

Myers says the driver never responded verbally to her.

“He just kind of gave me a smirk, and he was kind of nodding his head at me,” Meyers said. “He kept up for the next 7 miles, because from Semoran (Boulevard) to my house is about 7 miles, he was following me.”

She says he followed her home to Miami Road, where her husband and son were waiting.

“I was already on the phone with Matt,” Myers said. “He was like, ‘I’m gonna come outside I’m gonna record him. He’ll probably just leave and I’ll try to get his license plate.’”

A neighbor’s home security system caught the confrontation on camera. In the video shared with News 6 by Michael Garay, the victim’s son, Gerren can be seen being thrown through the car’s windshield.

Gerren captured his own video on his cell phone. In it, he recorded a brief look at the driver’s face.

The family reported the incident to the Orange County Sheriff’s Office. Deputies are currently reviewing the video and say they are looking to find the car and the driver.