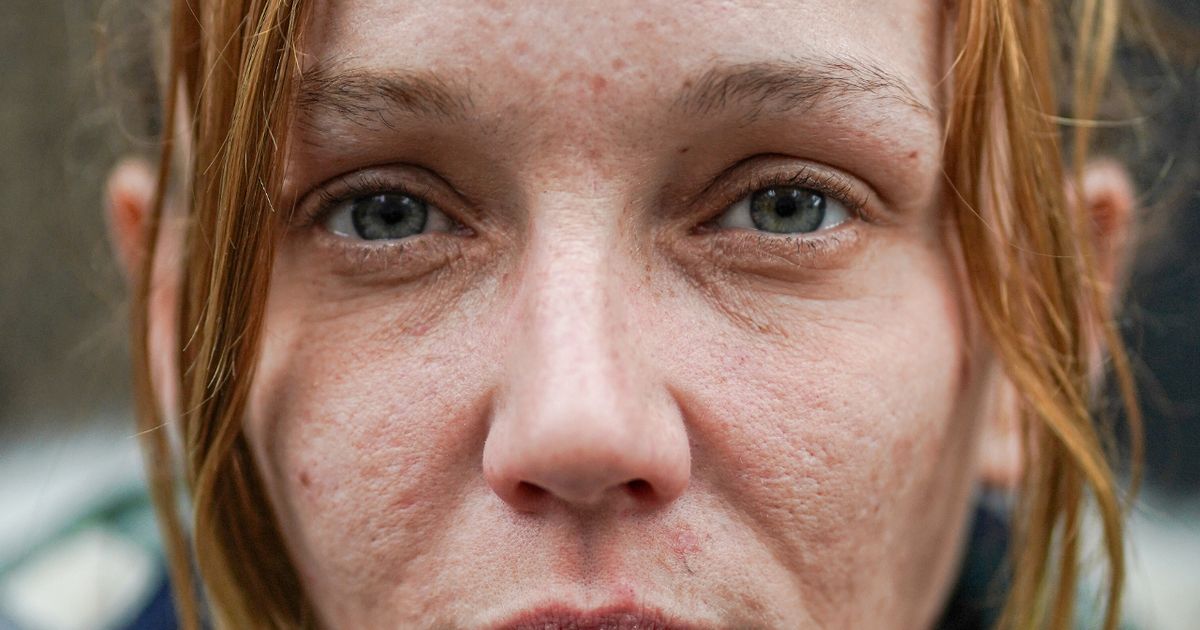 Wrapped in a duvet outside Spar, Samantha Taylor tries to describe what it’s like to sleep rough in winter.

The 31-year-old has been homeless for two years.

And she dreads the thought of another winter on Manchester’s streets.

“It’s freezing at night,” she said.

“I lost a friend because of the cold last winter. I’ve lost a lot of friends since I was homeless, slept in the cold and overdosed.

“But in a way, winter isn’t that bad because of the Christmas markets. You get more people and more money.”

Samantha says she surfs on the sofa whenever she can, but otherwise sleeps on the steps of the Exchange Theater in St. Ann’s Square.

“Being a woman on the street is terrible,” she said.

“You come around when people ask for sexual favors, provided I use drugs or am a prostitute.

“They look down on you and say you stink. I get people talking to me like I’m nothing.

“I’m really scared all the time. I just try to stay with other people, other homeless people I know.

“I just want to get out of the street. I want an apartment and I want to start my own business.”

Across town on Whitworth Street, West Wayne Guion describes how he was homeless all his adult life after running away from care as a teenager.

And despite the exertion, the 48-year-old admits that he sometimes thinks that he is “better off” on the road.

“I got in touch with someone on the homeless team, they gave me a phone, they said the next available bed was mine, so it’s just a waiting game,” he said.

Wayne, originally from Liverpool, knows best how hard a winter on the road can be.

“The winters are bad,” he says.

“I usually fall asleep between 11pm and 12pm, but around 4am to 5am it starts to get really cold and it wakes you up.

“You know you won’t go back to sleep because it’s too cold. When you’re homeless, you don’t sleep much.”

Mark Wilson, 44, is originally from Stoke-on-Trent.

He says he lost his home about 14 months ago after his parents died and the council decided the three-bed house was too big for one person.

He moved to Manchester to be closer to his daughters who live in the area, but he slept restlessly.

He leans against the trash can on Market Street and says he’s trying his best to get off the street.

“I’ve been to all of the hostels and hotels,” he says.

“I don’t want a bed for the night, I just want a one-bed apartment.

“For what it costs to put me in a hostel or a hotel, it would be cheaper for them to get me an apartment.

“I was in Sachas (a hotel in the Northern Quarter) for six months during the lockdown. How much must that have cost? It was fine, but at the end of the day I’d rather have my own apartment.

“I’m on the waiting list. You gave me a phone. I have a permanent place to sleep so they know where I am if something happens.

“I’ll try it. You see people out here who don’t try. I can take care of myself, I just need help getting an apartment.

Sitting outside the co-op on the High Street – he asks that his last name not be printed – describes how he was released from Walton Prison in Liverpool about 14 weeks ago after being half a 12 month old Served prison sentence for possession of an assault weapon.

There was nowhere to go when he got out, and this was the second time in his life that the former construction site worker was on the road.

He currently spends his nights under a canopy outside the CIS tower.

“I was with my brother, but he has a wife and children, so I didn’t want to wear him,” he says.

“It was hard. It’s scary sometimes. I’ve been homeless in the past, but never for so long.

“Some people buy me a pie or a cup of coffee, but others look down on you.

“I don’t ask for money, but if they put something in my cup or want to buy me a coffee or a sandwich, great. I’m just trying to get enough to get a bed for the night.”

Nikolaus Cooke, 52, has been on the streets for four years.

The Liverpool native became homeless after losing his job as a warehouse manager when the company he worked for went bankrupt.

“You budget for things when you get paid, but I lost my job and ended up at Universal Credit,” he says.

“I couldn’t afford the rent. After that everything collapsed.

“Right now, I’m sleeping on people’s couches or wherever I can lower my head.

“Hostels are hard to come by because there are so many homeless people.

“They’ll take you to a hotel for a while, but they seem to swap and switch homeless people there.

“Winter is terrible – it’s really bad. Last year I was only off the road for a week (winter).

“You just have to endure it. When it’s freezing, you can’t sleep. You just lie there and try to keep yourself warm. Luckily I have two sleeping bags right now.”

Nik, a recovering heroin addict, says drugs are still a major problem among the homeless in Manchester.

“It’s Spice on Piccadilly, but if you come down Market Street there’s heroin and crack.

“There’s kind of a line break. I used to be addicted to heroin, crack, then got a methadone script, and now I’m on (opiate substitute) Subutex.

“I’ve been clean for about two years. It’s hard to get away from it, but I told myself that if I get another script, I want to go to Subutex.

“It’s like a blocker to keep you from consuming. I just want an apartment. As soon as I have an apartment, you will never see me here again. “

Coun Luthfur Rahman OBE, Vice Chairman of Manchester City Council said: “Our overriding goal is to help people who sleep poorly to get off the streets permanently.

“The first practical step, however, is to ensure that people in temporary accommodation receive the intensive care they need.

“With the Rough Sleeper Accommodation Program we help people on their way off the street, through assisted living and an independent life with all relevant support before moving to permanent accommodation.

Paul Dennett, Salford and Greater Manchester Mayor for Homelessness, said: “The shocking reality of homelessness and the severe sleep crisis often becomes apparent as we walk into the winter months.

“Nobody should ever stay in this position, now or at any time of the year, and so we are doing everything we can to put an end to the homelessness and poor sleep in Greater Manchester.

“Thanks to the efforts of our councils, volunteers and community groups in all 10 boroughs, our A Bed Every Night program has made a real difference to thousands of people in Greater Manchester.

“Providing shelter and dedicated support to people who are restless or at risk, the program has contributed to a 57 percent reduction in restless sleep over the past four years.

“It also helped assist people in their own tenancies and 269 people were accommodated through the Housing First pilot.

“We know, however, that what is right for one person is not always right for everyone. Earlier this year, we launched the Greater Manchester Homelessness Prevention Strategy, which is about addressing the diverse and complex problems that lead to homelessness and hardship in sleep.

“The best way to do this is to involve people in and learn from these lived experiences, and that Strategy has been co-produced to ensure that the services people use are best suited to their needs.

“We must also continue to push for long-term solutions to the national homelessness and poor sleep crisis.

“We need more genuinely affordable and social housing, more jobs that pay real wages for hours of life, and an end to the cutting off of the lifeline for families and some of our most deprived communities.

“We are making our own efforts here in Greater Manchester and are committed to providing at least 50,000 affordable homes through the Places For All plan.

“We are working hard with Greater Manchester housing providers to ensure that more social housing is available to people affected by homelessness by making the most of government funding through the Rough Sleeper Accommodation Program and standards in the private rental sector improve our Good Landlord Scheme.

“No initiative will offer the silver bullet, and there is still a long way to go to resolve the housing crisis that drives all forms of homelessness. That’s why we want the government to work with us to make these ambitions come true. “

Sign up for the MEN email newsletter to get the latest on sports, news, events and more by following this link