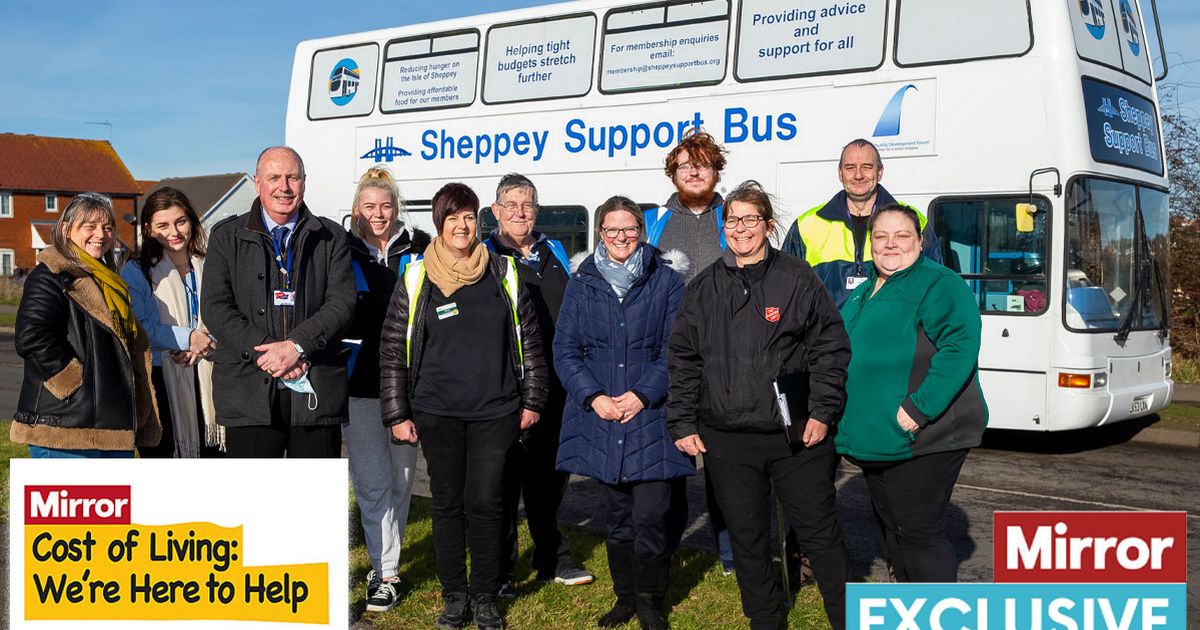 In the snaking queue for the Sheppey Support Bus people raise their hoods against the wind screaming off the Thames Estuary.

Harsh winter sun throws tired under-eye shadows into sharp relief. These folk in Minster-on-Sea, on the Isle of Sheppey, Kent, are here to ask for help and that’s hard to stomach; for many, embarrassing.

Chantelle Stroud, 33, is out of electricity today.

The stay-at-home mum of two under-fives and a teenager thankfully has £8 on her gas meter due to a cold weather payment, administered when temperatures drop below 0 degrees.

But without electricity, cooking is an issue. She’ll go to her mum’s.

Chantelle Stroud in front of the bus
(

Chantelle said she goes to bed at six to keep warm
(

Her “big, old house”, a private rental, is “impossible to keep warm” anyway when you eke out gas.

“I go to bed at six with the kids to keep warm,” she admits.

“We have been ill for weeks and weeks, my eldest since before Christmas, the doctor says she has a problem with her lung. Her bedroom is freezing.”

The innovative double decker bus, brainchild of Sheppey Community Development Forum, was launched in November to offer food support – a social supermarket on the lower deck – and fuel poverty support – offices on the upper deck – to the people of this deprived area.

Up top sits Stevie Pettitt, a fuel and water adviser for Seashells, a local family charity, whose job is to arrange emergency fuel vouchers, supplied by Fuel Bank Foundation, to people unable to top up their gas and electricity prepayment meters.

The bottom level of the bus is a food bank
(

With an energy price cap rise of 54% in April announced by Ofgem this week, this is the frontline of Britain’s fuel poverty war.

Here, Stevie stares desperation full in the face while multi-millionaire chancellor Rishi Sunak just tells us higher energy prices “are something we will have to adjust to.”

He’ll have no idea what that truly means.

The people here know full well about ‘adjusting’ following energy hikes last autumn – they are already skipping showers, turning off the gas so they can cook their children’s tea on electric cookers, going to bed early.

And yet most say they still have either run out of electricity or gas, or have only a pound or two left.

Stevie says: “I feel I am putting a sticking plaster over a gaping wound. It is heartbreaking, you can hear the devastation in their voices saying ‘I’m cold’.

Emily Retter (left) in the bus
(

“People will ask for food they don’t need to cook, they wear dressing gowns over their clothes, they make tea in flasks so they don’t use the kettle.

“It’s got to the point where this is all I’m doing and nothing else.”

A commonplace message pings on her phone. It reads: “I’m so sorry to ask, but how many fuel vouchers are people entitled to?

“I’m really struggling with topping up my gas, we have been wanting to keep the three kiddies warm. I have been advised it will be switched off at 10am today. Could you help me please?”

The limit is theoretically three a year – but Fuel Bank Foundation can’t be strict. Stevie will rush, but can only get her a voucher by tomorrow.

Ofgem’s announcement for most households means an annual bill increase of £693 to £1,971 a year.

For those using prepayment meters, many in private rentals and social housing, that will rise will be £708 to £2,017 on average.

Sunak has offered a £200 loan to families via energy companies, but this will need to be paid back over time.

Also £150 council tax rebates to those in bands AD, but the Resolution Foundation has said one in 12 of the poorest 10th of families do not live in properties of these bands. This is also not due until October, when experts predict further energy cost rises.

The bus is split into two parts
(

It’s hard to comprehend what this will mean for folk on the bus, of whom all I meet rely on benefits and do not work, either due to ill-health, caring responsibilities, or struggle to find employment.

The vouchers are worth £49, originally designed to last ten days on average, but now barely scrape a week for many.

From mid-November Stevie’s given out 185.

Our Cost of Living team of experts are here to help YOU through a very difficult year.

Whether it’s rocketing energy bills, the cost of the weekly shop or increased taxes, our team will be with you all the way.

Every Thursday at 1pm they will take part in a Facebook Live event to answer your questions and offer their advice. Visit facebook.com/dailymirror/live to watch. You can read more about our team of experts here.

Fuel Bank Foundation has 149 centers across Britain handing out around 500 vouchers a day compared to 100-200 a year ago.

Deborah Clay, 48, from Sheerness-on-Sea, the bus’s next stop, has been without gas since Christmas Eve.

A former baker and confectioner battling bad health and living alone, she racked up energy debts so agreed to switch to a prepayment meter, paying off that debt incrementally from each top up.

But on Christmas Eve when she put on £10 for gas, there was a fault and it didn’t register. She had no more to add.

Struggling to get hold of her energy supplier, out of minutes on her phone, she battled on with only electricity and then developed pneumonia. She’s been scared to put more money on and lose it.

Kerry Sweet restocks the shelves of the bus
(

Raspy with a chest infection, she begs for Stevie’s help.

Her voucher will clear her debt and standing charge, which has been mounting even though she hasn’t been using gas. And the energy company, finally reached, knocks off the lost £10.

Today is a good day, but it’s firefighting. She calculates energy costs her around £60 a fortnight, even scrimping, and without her debt.

“I borrowed an electric one-bar fire and have slept on the settee,” she admits. “I’ve boiled the kettle to wash up, I shower maybe once a week, it sounds skanky. For cooking I’ve used the microwave and one ring on the cooker.”

People can also pick up toiletries
(

William and Susan Bunce resort to sitting in the dark.

Susan, 62, cares for William, 61, who has had a mini stroke, angina, and recently suffered pleurisy twice. He feels the cold painfully.

Diligent Susan puts £20 on electricity and £20 on gas each fortnight. It won’t reach the end of that time. An extra tenner from her carer’s allowance will usually be needed to carry them through.

The heating comes on for half an hour in the morning and one hour at night in the living room only – “and some days not at all.”

“We don’t sit with the lights on now,” she says. “There is street light outside.
“We used to shower every day, now it’s twice a week. It does get me down sometimes.”

The visitor that leaves us silent, is a mum in her twenties who asks not to be named because she fears judgment.

She regularly chooses electricity over gas so she can feed her two children.
Today she has around £2 left on gas, £1 on electricity.

She is searching for work, her Universal Credit is not due until later this month.

“I borrow from friends, it’s a constant loop of asking,” she says, eyes glassy with tears she won’t let fall.

“I go for electric so we can eat, I have been without gas for a week.

“As soon as the kids come home from school they put their dressing gowns on and sit with duvets. If it’s sunny I keep them outside running around, it’s warmer.”

Stevie is despairing. A voucher only gives “breathing space”.

Matthew Cole, head of Fuel Bank Foundation, says Sunak’s measures “don’t go far enough for those who need them the most”, and wants additional targeted support.

Before a 3pm deadline Stevie must rush to process the vouchers, responsibility weighing heavy.

“The problems feel so huge, I can’t think of anything else,” she says.

Should I switch energy provider – and which are the cheapest energy suppliers?