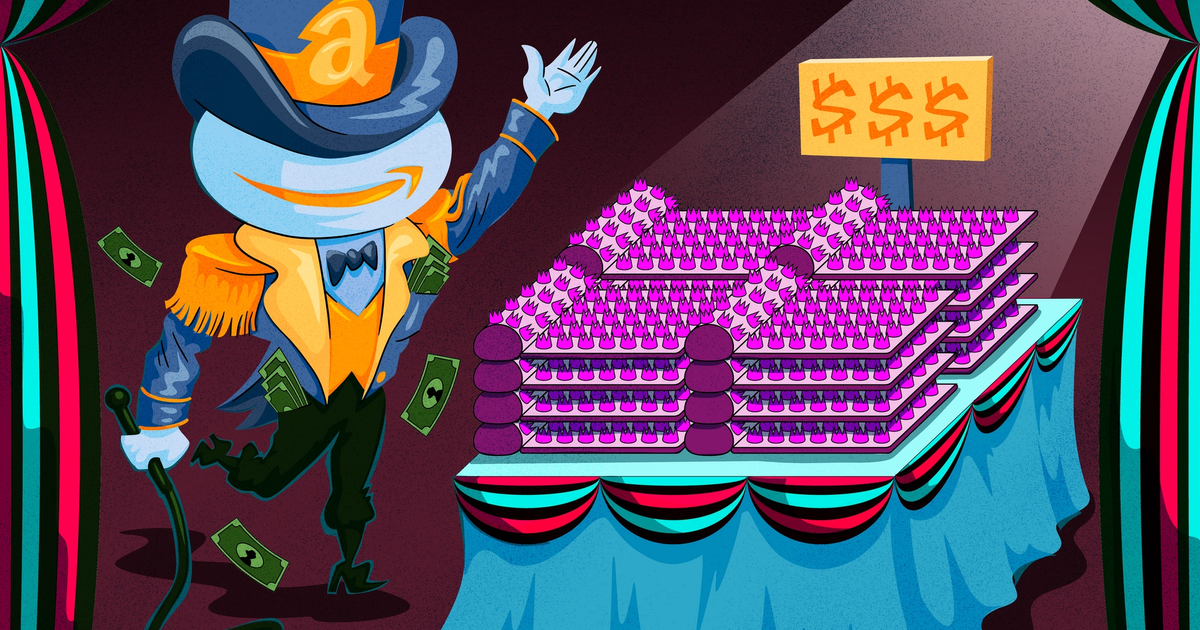 Evangelina Bulkley is showing off her latest life-changing find in a 30-second TikTok video. “The literal best thing I’ve gotten from Amazon,” an on-screen caption and a voice-over say. Bulkley smiles and flashes a peace sign. An acupressure mat is unfurled on the floor and she lies down on it, making sure every inch of her back is in contact with the clusters of small plastic spikes that cover the fabric.

She gets up and turns her back to the camera, showing off her skin, now bright red and covered with tiny star marks from the pressure of the spikes. Despite how painful this looks, Bulkley smiles into her camera and ends the clip with a thumbs-up. “Sore muscles feel like they are melting over spikes,” the caption and voice-over say, “let me know if you like it.”

The video prompted hundreds of comments. “Sigh *opens amazon*,” says one with the acknowledged resignation that watching Bulkley’s TikTok has inspired yet another purchase. Other viewers seem to agree—the comment got nearly 900 likes.

Bulkley’s video has roughly 758k views, making it one of her most viewed posts, but the star of the video is the acupressure mat, tortuous as it might seem. It’s ubiquitous across TikTok and Instagram, where influencers tout its benefits even as reviewers jokingly describe it as “evil.” It’s so popular that Amazon includes it on its Internet Famous page, a curation of “viral products” that includes everything from acne patches to cordless drills and a mini waffle maker.

Products now attain the viral fame once reserved only for cats playing a keyboard points to a new phenomenon: the increased buying power of TikTok users, who are taking cues from creators building content empires on hashtags like #TikTokMadeMeBuyIt, which has 15.7 billion views.

According to a recent TikTok for Business press release, the “unstoppable power of #TikTokMadeMeBuyIt” inspired 67% of users surveyed to “shop even when they weren’t looking to do so”—but, consider the source. Forget lip-syncing and dancing videos, TikTok influencers can earn cash and build a following by recommending niche Amazon products like the acupressure mat and earning commissions (through Amazon) on the sales they generate.

Creators like Bulkley have turned their fans into a powerful buying force willing to spend $20 on a life hack that feels like, in the words of one five-star Amazon review, a “bizarre fire torture mat.”

ProsourceFit, the maker of the acupressure mat that Bulkley promoted, has been selling this particular mat since 2012. Konstantin Mikhaylov, ProsourceFit’s director of development, didn’t know about Amazon’s Internet Famous page. “It’s a nice surprise,” he said. That shows how far removed importers and manufacturers are from the influencers selling their wares.

Mikhaylov said he thinks both social media and the pandemic played a factor in the boom of this product. “It’s kind of weird to sit on [an] acupressure mat in the office,” he acknowledged, but after employees fled their cubicles for work from home, they could “try out new things,” like laying on a simulated bed of nails, apparently. Website traffic graphs for both ProsourceFit’s retail website and its Amazon store hit several peaks during the pandemic, he said, adding that the acupressure mat is one of the company’s bestsellers and accounts for 7% of its annual revenue.

It’s nearly impossible to trace the origins of the acupressure mat craze on TikTok, since the app makes it hard to sort videos by time stamp. But the most watched videos under the hashtag #acupressuremat reveal the rise of the product’s popularity. Mehmet Oz, a celebrity physician, host of The Dr. Oz Show, and current Senate candidate, posted a video explainer of the mat in October 2020: He describes it as “the weirdest thing in my house,” in part because it feels like “stepping on Legos.”

Another major boost came from Ryan Mulvany, better known as @mrdeals_, whose account is dedicated to Amazon finds. He pressed a balloon against the bed of plastic spikes and watched it pop. The 17-second video he posted in February 2021 has about 1.3 million views. Then a fitness creator, a drink creator, and other accounts with at least 50,000 followers jumped on the bandwagon throughout 2021.

This echo chamber of recommendations hasn’t stopped reverberating on the platform. In April 2022, a yoga influencer with almost half a million followers brought the acupressure mat onto center stage again.

“Amazon finds” is an extremely popular keyword on TikTok, and there are a ton of accounts dedicated to must-haves from the Everything Store. It’s part of a bigger genre of TikTok dedicated to discovering “finds” at other major retailers (think Costco and Nordstrom). They all recruit creators or “affiliates” to promote their products. The result is an entire landscape of content about purchasing. An affiliate recommends an item, TikTokers buy it, and then Instagrammers and YouTubers report on whether or not a TikTok trend was worth it.

Get smarter in just 5 minutes

Get the daily email that makes reading the news actually enjoyable. Stay informed and entertained, for free.

Take TikToker Lauren Wolfe, who shared a pair of booty-lifting leggings she found on Amazon. Wolfe’s recommendation went viral and “TikTok leggings” became one of the most searched terms on Amazon in early March 2021. The leggings became so ubiquitous across the platform that women covertly filming reactions to their wearing them became a popular TikTok challenge. The TikTokification of e-commerce creates a shopping loop that feels a bit like a Christopher Nolan movie—somewhat confusing, inescapable, and a little too long.

Items become TikTok famous through a two-step process: Products go viral because they are endorsed by influencers, and then more creators want to capitalize on that popularity. Shannon Smith, a TikToker and digital marketer who shares tips on how to grow and monetize TikTok videos, said, “Instead of just picking and choosing random products, I always recommend going and searching up the hashtags, seeing what products are in high demand, and then making videos promoting those.”

The #TikTokMadeMeBuyIt hashtag offers a deluge of content where creators share products under $50 that are niche enough to be intriguing and yet also promise a significant enough enhancement to quality of life to make the unplanned purchase feel like a necessity.

For creators, TikTok is a fiercely competitive environment where everyone’s hunting for the next viral product on Amazon, since it’s the most lucrative platform. Bulkley said that she found the acupressure mat product herself and “decided to share.” In her TikTok bio, a link directs followers to her Amazon Storefront, called “Confessions of a Shopaholic,” where she lists all the products she’s recommended. She earns a commission on any purchase made through her Storefront, but how much she makes is hard to determine. (Bulkley did not respond to questions about how much she earns.)

“We act as free advertisers for companies,” Smith said.

TikTokers also buy products because sales strategies are embedded in those entertaining videos. Instead of talking about items all the time, influencers like Mulvany and Bulkley showcase them through demonstrations. Mulvany said that conceptualizing videos begins with asking, “What is the visual appeal of this product, and can I show that visual appeal within three seconds?” The acupressure mat met those criteria, so he made the video. It’s inherently entertaining to watch someone lie on a pseudo-bed of nails in the name of wellness.

But capturing attention is not enough. Danny Desatnik, creative initiatives manager at influencer marketing platform #paid, explained that the most successful affiliate-creators are the ones who can persuade audiences by presenting a problem and then the product that solves the problem. The acupressure mat is advertised to help relieve muscle tension and chronic pain, and a mere $20 would be a steal to solve these problems. The likes and shares on these videos serve a similar function to reviews on shopping websites.

Not all of the posts about the acupressure mat are promotional. User @gabriella_m_m, who is a college student according to her TikTok biography, bought the mat after seeing Mr. Deals’s video. “Don’t buy this!!!” “Not gonna lie, it’s extremely painful,” she said in a now-deleted video. She ended up reselling the mat to a follower in the comments section.

“Maybe we’ve just seen the tip of the iceberg when it comes to social commerce on TikTok,” Desatnik speculated. Social apps like TikTok, Instagram, and Facebook have all introduced their own shopping features to convert traffic into revenue. TikTok partnered with Shopify last year to test its in-app shopping feature among a small group of creators. People trust influencers, who look like friends, for recommendations.

“It’s pretty crazy how now…there are so many big influencers, because people trust them to recommend good products. And that’s how I know at least I find like half of the things that I need and that I use daily,” Smith said.

But it’s not only about buying a pair of booty-lifting leggings or an acupressure mat—it’s also about participating in a larger social media trend that comes with a promise. A mat with plastic spikes is transformed into needed relief, and leggings become #relationshipgoals. That’s the fundamental power of #TikTokMadeMeBuyIt.

“Hurts so bad feels so good,” a TikTok user replied to Bulkley’s video, with a string of emoji including heart eyes and hot face sweating. A dozen replies followed, ostensibly from people who said they just placed their orders. This word-of-mouth tactic with a new twist works so well that people are convinced any niche find, like the spiky mat, could be life-changing, and they welcome it with an open wallet.