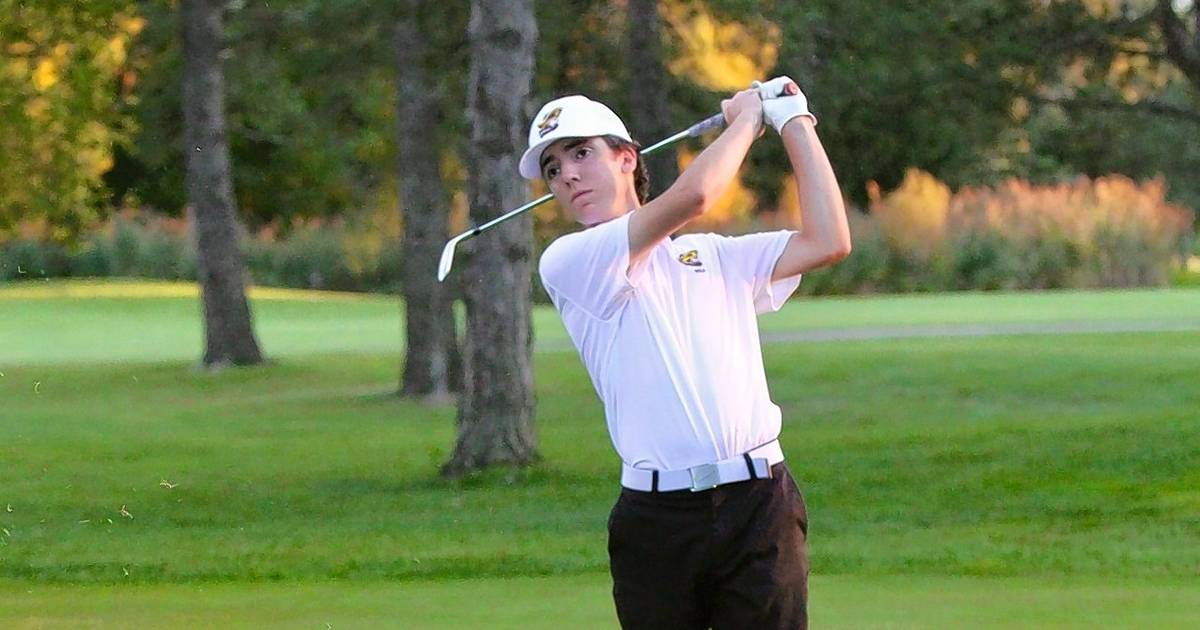 He hit his first tee shot at Pine Meadows Golf Course, but told his dad who was there watching: “Something’s not right. I really don’t know if I’m able to play this entire round.”

He managed to labor through his 9-hole round, but he was right: Something was wrong.

Now, after one collapsed lung, one surgery, two tubes in his side, multiple incisions into his rib cage and chest cavity, three weeks without golf, and 2 birdies in the final three holes of the sectional tournament, something seems to be right because Lutzke is in Bloomington for the ISHA 2A state finals. He’s tied with four others atop the leaderboard after shooting a first-round 72 on Friday.

It started with back pain the night before the match. He didn’t experience any trouble breathing until the morning. And then his chest hurt, and all of a sudden, he could hardly bend over.

When his mother, Tina, went to wake him up for school the next morning, Jacob explained that he couldn’t go.

He woke up at 3 am and couldn’t move. Tina was surprised because Jacob never missed school.

So they went to the ER, and after getting an X-ray, they learned that Lutzke’s lung had collapsed. The official diagnosis was spontaneous pneumothorax, for which lanky, adolescent males (Lutzke’s stature) are at greatest risk.

He had to get a tube inserted in his side to reinflate the lung.

The problem was the first tube didn’t really work.

“They had to make some cuts in my side,” Jacob said, “and then they were gonna go in, and they were gonna basically cut out all the air pockets. So I had to go under. They did a procedure.”

His first question out of his successful surgery? “How long is this gonna take? Because I’m in the middle of golf season.”

After surgery, doctors replaced the original tube, and that one came out exactly a week after the first one went in.

He was instructed not to swing a golf club for two weeks.

However, that might have been the silver lining; In those two weeks, all Jacob did was chip and putt around the greens.

He was a bit rusty at regionals on Sept. 28, but he managed to move on to sectionals. And that’s where everything kind of clicked.

“He’s a senior,” his mom said. “It was his last chance. Either that would be his last match as a high school golfer, or he was gonna move on.”

And there was nothing Lutzke wanted more than to move on to the state finals in Bloomington.

He never checked the leaderboard that day, but Lutzke had an idea of ​​what the cut line was going to be, and his goal was to shoot 78 or better.

The year before, he had just missed out on qualifying for the state finals by just a few strokes. This time around, he was right on the cut line.

Until he birdied 16 and 17. After that, he just had to finish strong.

His mom was watching “the best (match) of his life,” but Lutzke had one more putt on 18 to roll in before moving on.

Thank goodness for those two weeks of putting.

“I walked up, and I made it right in the middle of the cup,” Lutzke said.

It turned out that he didn’t need the putt to advance, as his 78 put him in seventh place out of 112 golfers, good enough for a bid to the state finals.

He walked over to his coach and parents, and they told him that he had made it.

And finally, he could take a deep breath.