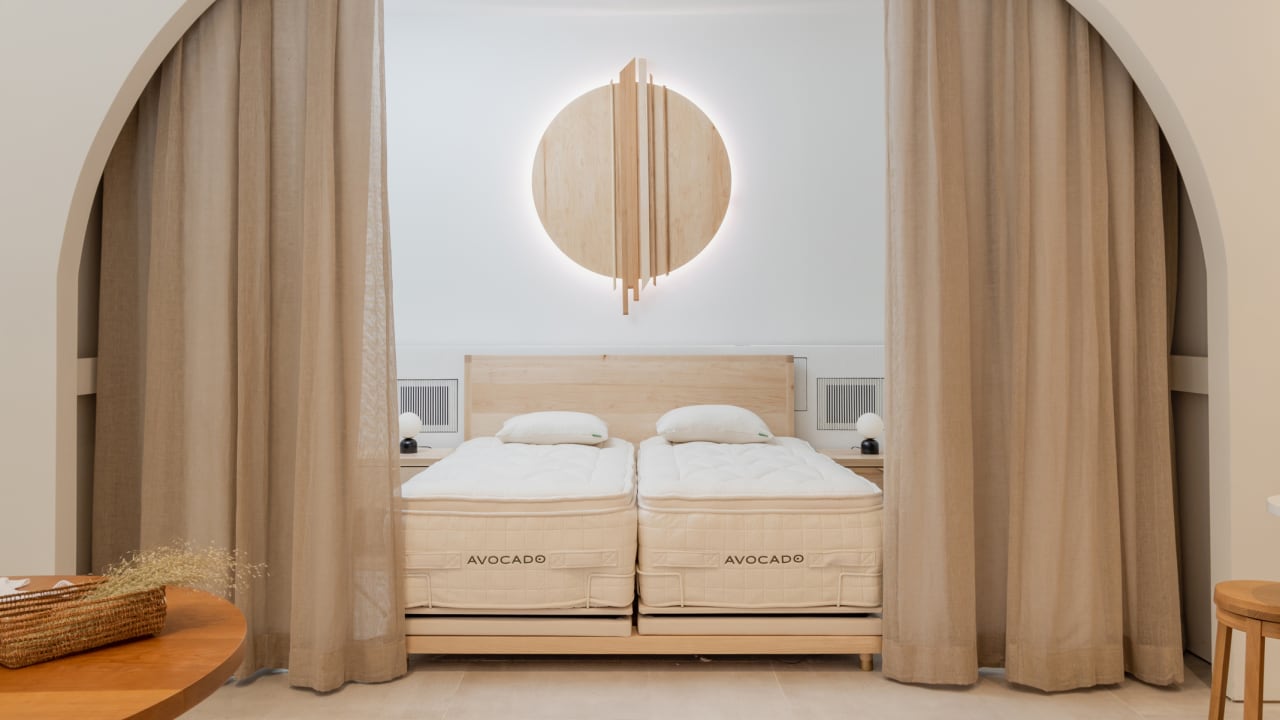 Avocado Green is counting on it. The mattress brand launched in 2016, at a time when hundreds of direct-to-consumer bed-in-a-box startups—like Casper, Purple, and Leesa—were flooding the internet with ads (and their bank accounts with money). By 2018, mattresses were a $29 billion market, with at least 189 different startups competing to own how we sleep, spending millions on social media ads, and paying mattress bloggers for positive reviews. But Avocado had a distinct approach. While other brands were focused on price or convenience, Avocado wanted to sell an entirely organic mattress. To do so, it had to build an entire supply chain from scratch, from buying a factory in Los Angeles to co-owning sheep and cotton farms in India.

But this slow, laborious process appears to be paying off. Avocado Green’s mattress received the top rating from Consumer Reports this year. And while some of its competitors have faltered and others have shuttered altogether, Avocado is now in full expansion mode: Its workforce is up to 800 (and growing); and this year, it opens 3 new stores, bringing its fleet to 12. Avocado’s success reveals that consumers are increasingly looking for sustainable, nontoxic products in every aspect of their life, beyond food and fashion.

The Problem With Foam

When memory foam hit the market, it seemed revolutionary: The material was invented for NASA spaceship seats in the 1960s; and by the 1990s, TempurPedic incorporated it into a comfortable, pressure-relieving mattress. Prior to that, they were largely made of metal coils and layers of cotton and wool. Soon, other brands, from Sealy to Beautyrest, were rolling out their own foam mattresses. And over the past decade, it’s become even more widespread, thanks to Casper and Purple—which realized that with memory foam, they could compress a mattress, squeeze it into a box, and ship it directly to the customer’s door. For the first time in history, consumers didn’t have to schlep to the store to pick their mattress, then have it delivered by moving truck.

Mark Abrials, who cofounded Avocado Green Brands with three friends, observed the explosion of direct-to-consumer mattress brands. But it also occurred to him that nobody was really thinking about how unsustainable and toxic foam mattresses are. For one thing, foam is made of polyurethane, which is plastic. The material is mixed with chemicals that allow it to be whipped into a froth before it is molded into a mattress. At the end of its life, it will end up in a landfill, where it will not biodegrade, but contribute to the plastic pollution crisis. Moreover, the Sleep Foundation says that toxic fumes from foam mattresses can cause breathing issues and nausea in some people, so it recommends airing them out for several days, a process known as off-gassing.

“This was a very crowded market space, which was certainly daunting,” Abrials, now Avocado’s CMO, recalls. “But it was also clear there weren’t many options for mattresses made from natural materials. So there was also an opportunity.”

Of course, the lack of natural mattresses on the market also meant that there weren’t many factories that specialized in using the kinds of materials Abrials had in mind. The founders located Brentwood Home, a 35-year-old factory in LA that made their mattresses out of latex, which is tapped from the rubber tree. So in 2016, Avocado placed its first order of mattresses, which were made from latex, cotton, and wool, and launched a website to sell them. And just like other startups, Avocado shipped the mattresses directly to customers in a box. “Would people buy it? We didn’t really know,” Abrials recalls.

It turns out, they did. Thanks to predecessors like Tuft & Needle and Casper, which had been selling since 2012 and 2014, respectively, consumers had gotten used to purchasing mattresses online, and Avocado’s stood out for being more eco-friendly. Avocado immediately sold out of its inventory and placed more orders. But Abrials wasn’t fully satisfied with the product. While Avocado’s materials were natural and would biodegrade at the end of their life, he thought it would be better if they were sourced from organic farms. A lot of latex and cotton is manufactured using harsh pesticides and other chemicals that pollute the soil and groundwater with toxic chemicals. The founders decided that the best way to control the manufacturing process was to own the factory; so in 2018, Avocado acquired Brentwood for an undisclosed sum. And together the two companies tried to figure out how to make a fully organic mattress. “Owning the factories allows us to keep a close eye on the quality,” says Jessica Hann, senior vice president of brand marketing sustainability at Avocado Green Brands. “But it also allows us to be more transparent with our customers, including tracking our carbon footprint.”

Avocado hired sourcing experts, and as they searched for organic suppliers, they discovered small family-owned farms in India that aligned with the company’s values. But rather than simply sourcing materials from them, they decided to invest in owning them. Today, they co-own a certified organic latex facility in Kerala, South India. They also co-own a sheep farm in the Himalayas, which is certified by the Responsible Wool Standard, where they graze 200,000 sheep on about 100,000 acres of land. The sheep are sheared annually, and all of the wool is processed, then sent back to Avocado’s Los Angeles factory.

Starting at $1,399, Avocado’s mattress was more expensive than many of its peers, whose mattresses sold for as little as $399. But as the brand was able to scale its operations, it was able to release a less expensive mattress, with fewer components, that starts at $799. It also launched a luxury mattress that is plusher and includes more layers of materials, starting at $2,799, allowing it to tap into both the lower and higher ends of the market.

Saying No to VCs

As the mattress wars heated up five years ago, startups made headlines for the massive infusions of VC capital they received. Casper, in particular, stood out for raising $339.7 million over five rounds of funding, which led to a valuation of $1.1 billion in 2019. But Abrials says that Avocado’s success has a lot to do with refusing to take venture funding. The company has been entirely funded by the four cofounders themselves, several of whom were entrepreneurs who sold their previous businesses to launch Avocado. “We liked the independence we had to make choices that were right for us, rather than trying to make things look good for an investor’s balance sheet,” he says. “We had seen investors want in, and then want out of a company, after a designated period.”

But for all its funding, Casper hasn’t been able to build a profitable business. In 2020, it had a disappointing IPO after its financial statements revealed that it lost money on every mattress it sold, largely because it poured a third of its revenue, $114 million, into marketing. Analysts pointed out that Casper didn’t actually have a unique product, so it acquired customers largely by spending money on social media marketing. And as the market got more crowded—with at least 178 different online mattress brands by 2018—it got more and more expensive to buy ads. “I think VCs were applying the software model for scaling to traditional goods,” Abrials says. “But creating a product—especially aa unique product—is very challenging. Our materials come from complicated places; it takes a lot of people to make physical things; Mattresses are hard to ship. Sometimes I think we’ve really got to be crazy to do what we’re doing.”

This year, Casper announced that it was taking the company private again, at less than half of its IPO price. It is not the only mattress brand struggling. Purple’s CEO stepped down last year after disappointing financial results. And some startups, like Tomorrow Sleep, a bed-in-a-box spinoff owned by Serta Simmons, shuttered altogether last year.

While Avocado won’t share its revenues, it appears to be growing quickly. It now has a million square feet of manufacturing space in LA, 800-and-counting employees, and 12 brick-and-mortar stores, in places including New York City, Marin County, California, and Georgetown, DC “We basically take what we make every year and reinvest it into the company,” Abrials says.

Six years into the business, Avocado’s founders have big dreams for the future. Beyond mattresses, the brand now sells sheets, towels, bed frames, sleepwear, and even skincare. In some cases, like beauty products, the company partners with other suppliers. But it is trying to make many of these new products, such as furniture, in-house.

Abrials is now fixed with trying to create a zero-waste factory, where not a single scrap of wool or piece of wood is thrown out. Currently, the brand is collecting all of these leftover materials and transforming them into new pieces of furniture, like a $599 coffee table or a $109 vase. “We’re asking our workers to save every little piece of wood we chop off and figure out what we can make with it,” he says.

But in the end, he believes this is how the brand will succeed. “This is still a crowded market,” Abrials says. “Sustainability is how we can differentiate ourselves. So we’ve got to keep pushing the bar.”