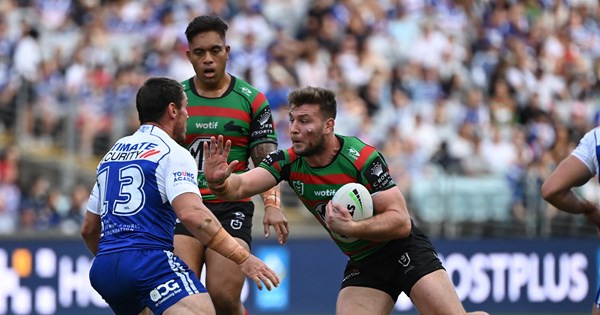 Jai Arrow has dedicated Friday’s 36-16 defeat of the Bulldogs to his grandfather who passed away while the Rabbitohs forward was in hospital receiving treatment for an infection that caused his cheek to swell to the size of a cricket ball.

South Sydney coach Jason Demetriou and team-mates paid tribute to Arrow for playing after he had spent five days in hospital – but the Queensland Origin star said he was never going to miss the match.

“I had the week from hell to be honest,” Arrow said. “My Pop passed away, as well, on Friday, so I just wanted to play.

“He would have wanted me to play. He was always my biggest supporter and a massive fan of every team I have played for, so I think the right thing to do was to strap on the boots and play.”

Ray Arrow died of old age in Guildford on the same day his grandson was released from hospital and Demetriou left a decision on whether he played up to Arrow.

“I got split last Saturday against the Dragons and on Monday, when I woke up, it was like a cricket ball,” Arrow said.

“It was maybe from the dirt or the ground or anything. It was just bacteria getting in there. Unfortunately, my face blew up like a balloon.

“It was painful, it got pretty bad. My eye sort of shut up on Tuesday but it all sort of came good.

“I got admitted to hospital on Monday and got out on Friday. I went straight home, dropped my stuff off and I was in an Uber to Redfern to tick the legs over.

“I didn’t want to let my team-mates down and I wanted to play, and JD thankfully gave me the option of whether I played or not.”

Souths captain Cameron Murray said the presence of Arrow, who started the match with a large piece of padding covering four stitches on his left cheek, had inspired his team-mates.

“I went up to him and thanked him and told him how impressive it was, and he got a rap from the coach as well,” Murray said.

“I think it is pretty inspirational and shows how much he cares for his team-mates and how he just wants to go out there regardless of the circumstances and put his best foot forward.”

Demetriou said few other players would have played.

“If there is one guy who can get off a hospital bed to play it is him. He is probably the only block in the change room who could do it,” Demetriou said.

“I was pretty keen to get him here a couple of years ago when we were talking about getting Jai to the club and he is a special bloke to have in your footy team, that’s for sure.”

Arrow said the padding on his cheek did not last long, but he had been prescribed medication to prevent the wound from becoming infected again.

“On my first run they were straight into it, so I ripped it off. It sort of split open again but it was nothing too major and the adrenaline takes over out there,” Arrow said.

“I went out there with my heart on my sleeve and obviously I was very grateful for the little accolade I received at the end. I didn’t really expect that but that’s why I love this club.

“I love playing for my team-mates – they are all my best mates – and I love the coaching staff. I just want to do my job for them as best I can.”