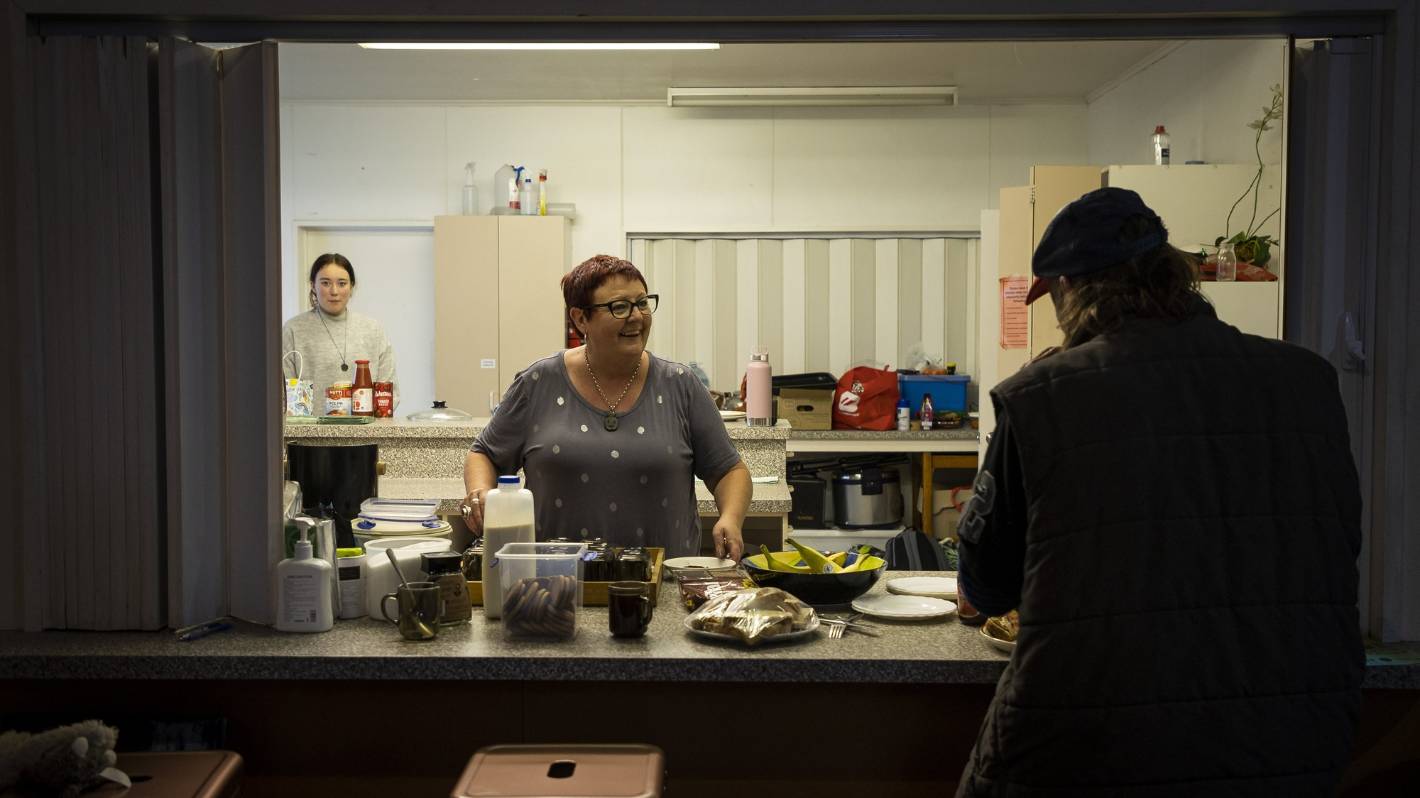 Sophie Weenik and Jo Parkinson cook up a storm, feeding rough sleepers at Unite Church. They didn’t get any sleep the night before, they said.

As the rain beats down on the roof of Nelson’s Unite Church, Tyrone thumbs through a copy of the Bible.

“It’s the only thing I could find here to read, other than children’s books,” he said.

Tyrone and four other rough sleepers spent the night at the church on Wednesday night, as flooding forced evacuations around Nelson.

Despite being without a home herself after being evacuated from her Nile St property, homeless advocate and concern for Nelson’s rough sleeper community as shelter closes

* The people sleeping rough in Nelson

* A week into level 4, a dozen people are still on the street in Nelson

“>Giving Aroha founder Jackie Galland, made it her mission to pick up as many rough sleepers as she could as the rain continued to fall.

As well as her Sunday evening meals at Pioneer Hall, Galland has been feeding rough sleepers for the last year or so, and knows all the spots where the homeless have set up temporary camps.

One was in a car, another in an abandoned building in a flooded area, Galland said.

“But there are more out there.”

At the church, Galland and her team members, Jo Parkinson and Sophie Weenik, are cooking up a storm and serving coffees. They were up all night, they said.

Galland expected around 10 people would hunker down at the church on Thursday night – including herself, as she waited to hear the fate of her home.

“My cats are still in the house, I’ll need to get back there at some stage.”

Galland questioned the lack of provisions for Nelson’s rough sleepers, and it had been a “frustrating, hard and upsetting” 24 hours of making noise, trying to raise help.

“Have we not learned from the last two lockdowns that these people get left behind? We have had two years to sort this problem out.”

“I believe everyone who was here last night would have been in the shelter,” she said.

She was grateful for the community who donated bedding and food. Currently, they don’t need more provisions, but would welcome donations.

Tyrone, who requested his surname could not be used, was in Nelson temporarily, having left his home in Otago to support his and children in the West Coast after his former partner suffered a brain injury.

When he tried to return home, he was turned away at Arthur’s Pass. Making his way north again, his car failed, and he ended up in Moteuka, where he got a job at a vineyard to finance repairs.

With all his spare cash going into his car, he was surviving on loaves of bread. He had no way of drying his clothes, and was wearing his last set of dry gear. He planned to contact Civil Defense to find out if it was safe for him to travel south.